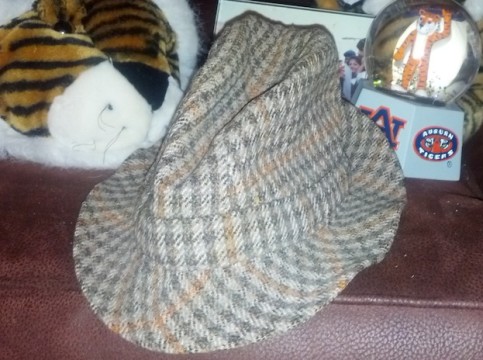 Kathy Moates’ most prized piece of Auburn memorabilia is a houndstooth hat.

Each fall, she takes it out of her closet, dusts it off, and places it on her coffee table where it stays all football season long. It’s the centerpiece to her living room’s Auburn decor. Folks come over for games. They look down. They look back up. “I thought y’all were Auburn people.” Kathy laughs and tells them the story.

She got the hat at the 1969 Iron Bowl. Auburn’s first win over Bama in five years. Bear Bryant’s worst defeat ever. It was a crazy game. Auburn players were faking punts from their own goal line on a whim. Auburn students were running onto the field to kneel and shout “hallelujah” when the fake punts turned into touchdowns. People were writing songs.

Even Shug let his hair down.

“He was walking down the sideline after the game was over and everybody started yelling ‘throw us your hat, throw us your hat!'” says Moates, an Auburn freshman at the time. She and her date were at the game, sitting above one of Legion Field’s tunnel exits. “He just hauled off and threw it, and I caught it.”

In 1969, that houndstooth hat across the state — and likely across the field that day — was still several years away from iconic status. According to a recent story in the Birmingham News, Bear Bryant didn’t start wearing a houndstooth hat until he was given one that year (or possibly 1968) by a Birmingham tailor; any “houndstooth” hat you may see before then is merely checked, the tailor claims. Of course, there’s photos of Bryant in a houndstooth hat at the 1968 Cotton Bowl, which was New Year’s Day. So you’d think he’d have to have had one since Christmas 1967 or so.

Regardless, Shug had also been wearing his houndstooth headpiece for at least a couple of years, often at games; there are several shots of him wearing or holding it on the sidelines in the 1969, 1970, and 1971 Glomerata, not to mention that Golden Flake ad. And no one batted an eye at the pattern choice. No one thought copycat! — there was no cat around to copy, except for maybe Shug himself, who according to his daughter regularly hit up Brooks Brothers in New York City for all manner of houndstooth apparel. He had purchased this particular fedora overseas in 1967. And it meant a lot to him.

“I got the hat two years ago in Ireland and it was pretty well battered up,” Shug told sportswriters after the game. “I guess I’ll never know what happened to my old hat.”

He was still mourning the loss during the next day’s Auburn Football Review — he guessed he’d just have to break in a new one for Auburn’s game against Houston in the Astro-Bluebonnet Bowl — but he needn’t have. Moates had already contacted the athletic department to schedule the hat’s homecoming.

“I called the next day,” she says. “I said I wanted to give it back to him to wear to the bowl game.”

And thanks to her dad, longtime Opelika-Auburn News reporter Robert “Scoop” Owsley, a camera was there waiting to snap a shot for the AP wire when she did. 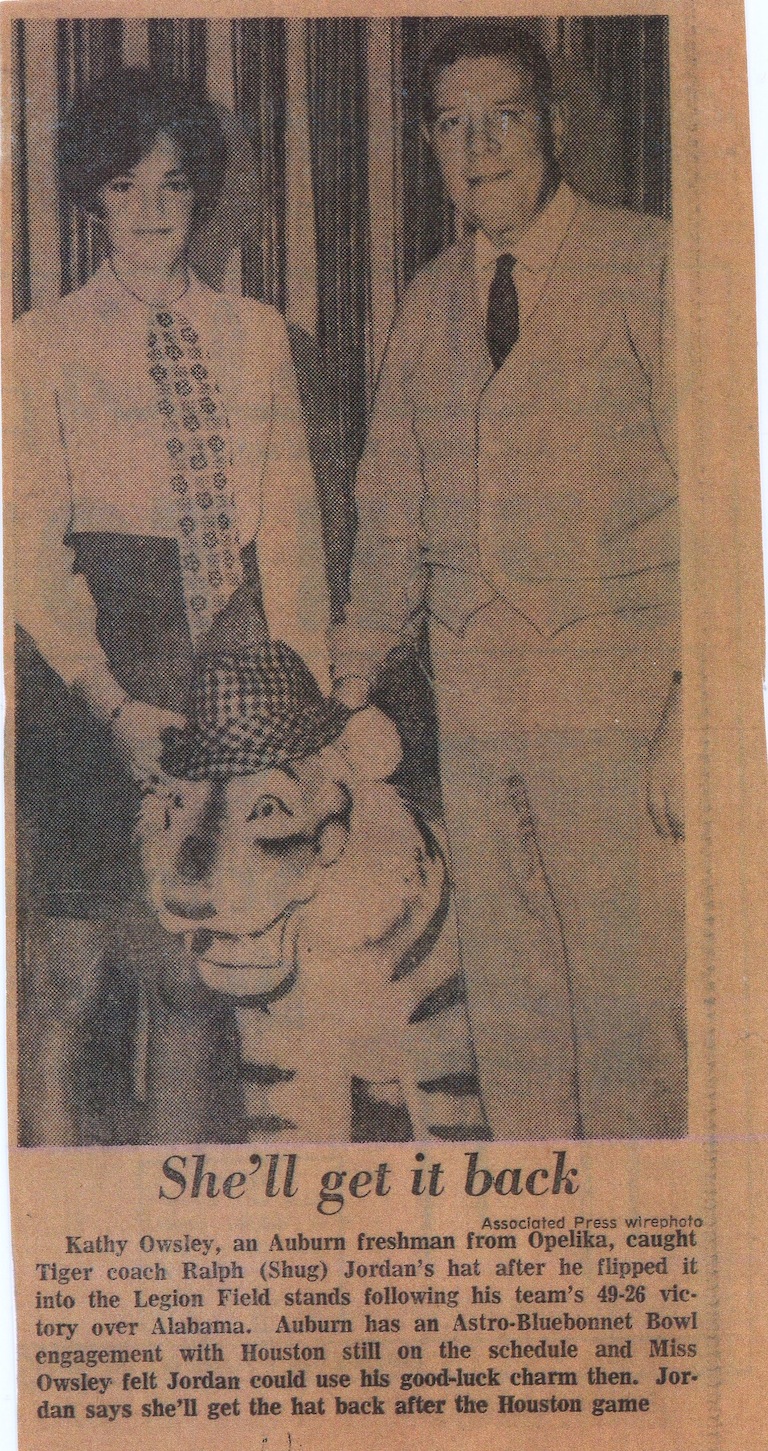 For Auburn fans living in today’s world of Bama Twins and that dude with the giant Bear Bryant back tattoo, the photo that soon appeared in newspapers across the country — “It was as viral as viral could go back in ’69,” Moates says — of legendary Auburn coach Shug Jordan and an Auburn coed posing beside a grinning stuffed tiger wearing a houndstooth hat is worthy of double takes, triple takes, quadruple takes, takes infinity. But in 1969, it wasn’t a photo of a houndstooth hat , it was just a photo of a hat, Shug Jordan’s houndstooth hat, and every Christmas card Moates received from an Auburn fan friend that year came with a clipping of it… probably accompanied with a “congrats,” because the caption concluded with “Jordan says she’ll get the hat back after the Houston game.” And she did. War Eagle.

“It always made me mad, all that (Bama) houndstooth crap,” Moates says. “Bear’s hat wasn’t famous then. I think Shug wore one first. And I have it.”