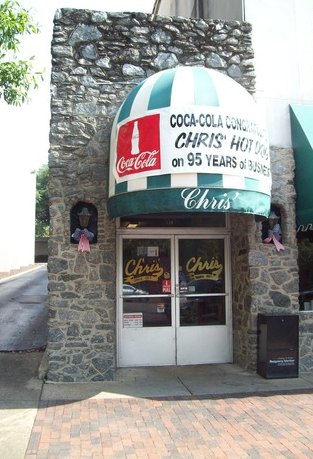 Founded in 1917, Chris’  Hotdogs in Montgomery has served a Who’s Who of history’s hotdog hungry.

Franklin D. Roosevelt would frequently ask for a box of the world famous hotdogs as his train pulled into Montgomery. So would Harry Truman.

Both Bush presidents have been served, and every Alabama governor since it opened. Chris’ catered for Elvis. Even Whoopi Goldberg has eaten there. And Hank Williams, was a regular.

“He would come here, get drunk, write songs on napkins and get kicked out. Rumor is that he wrote the song “Hey, Good Lookin’ here,” says current operator Costas “Gus” Katechis, a 2004 Auburn graduate and Chris’ grandson.

If you’re an Auburn grad and / or a beer connoisseur, Katechis’ name may sound familiar. Dale Katechis, one of seven members of Gus’ family to graduate from Auburn, is Gus’ cousin, and the owner and founder of Oskar Blues brewery, makers of that famous Wire Road bathtub beer.

“All (of the Katetchis family) are Auburn fans except for my brother Theo,” Katechis says. “He’s confused.”