Twenty-three-year-old bass fishing virtuoso Matt Lee’s individual title win in last year’s Carhartt Bassmaster College national championship earned him a spot in the 2013 Bassmaster Classic. Then it got him a fancy Triton boat and Tacoma truck complete with Auburn wraps. Now it’s landed him the cover of the latest issue of Bassmaster Magazine. Lee,  a member of AU’s Bass Sports Club  the first college angler to receive the honor.

Here’s a great video of him describing his feelings about competing in the 2013 Bassmaster Classic later this month. And here’s his truck (there are more photos of it here): 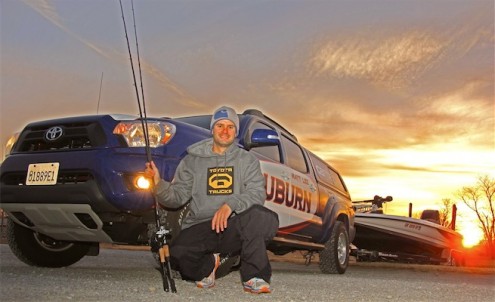 “I’m going to be driving this Tacoma to class, which will be great exposure for Carhartt and Toyota,” Lee told Bassmaster.com. “I hope it’s going to encourage other students to take an interest in Auburn’s bass fishing team. I know my best friends are going to give me a hard time for having such great gear. They’ll keep me grounded, because this is all such an amazing experience.”

Related: The Iron Bowl according to ‘Big Fish.’