Biggest Bama fan ever, political prankster, Wallace hater–isn’t that pretty much all you’re supposed to know about Shorty Price? I don’t know. I don’t know a lot about him, so I could be wrong, but I’m pretty sure you’re not supposed to associate him in any way whatsoever—never ever ever—with Auburn. And yet there it is, clear as day, on a picture of him and Bear Bryant (who looks like he’s debating who he’ll have killed for letting that little fella get so close to him at his book signing)—a “War Eagle” from Shorty Price to “fine gentleman” Scott Thurston, who seems to be a Plainsman staffer that was maybe writing about Shorty once upon the late ’70s (though if there was a story for Shorty to ever receive two copies of, I’ve yet to see it). 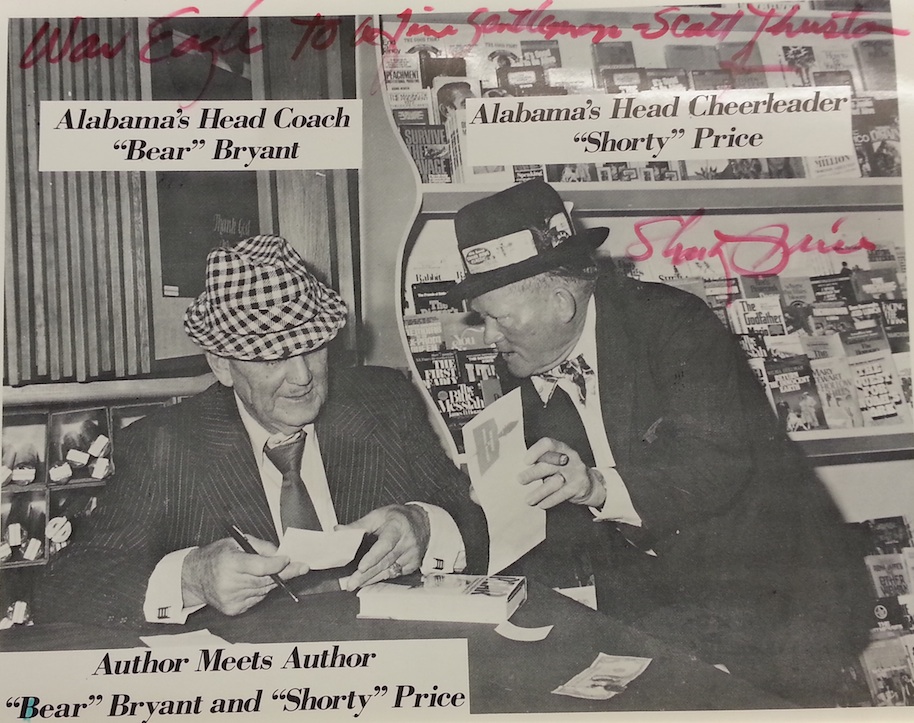 Sure, it’s probably just adherence to some Geneva convention of fandom or something even Shorty felt bound to—When In Roming with the Barners or whatever, which is probably how this token of Shorty’s appreciation ha, ha, ha’d its way into the Auburn archives. And just like that bombshell “Bear Bryant, Auburn fan?” napkin, it’d be worth posting and titling Shorty Price, Auburn fan?, cognitive dissonance or no.  But that’s not where the story of Shorty Price the Auburn Fan ends. Or rather, that’s not where it begins.

Again, I don’t know a lot about him. And maybe he was just too drunk, got the wrong stadium, lost a bet… or maybe it was court-ordered. But it’s pretty hard to never ever ever associate him with Auburn (beyond his hatred of Auburn—I mean, Bama fans delight in their stories of him drunkenly, verbally abusing proper Auburn ladies) when he’s pictured in the Plainsman’s 1969 homecoming spread with the caption: “Enthused Fan Leads Alum Cheer: Shorty Price, Homecoming perennial.” 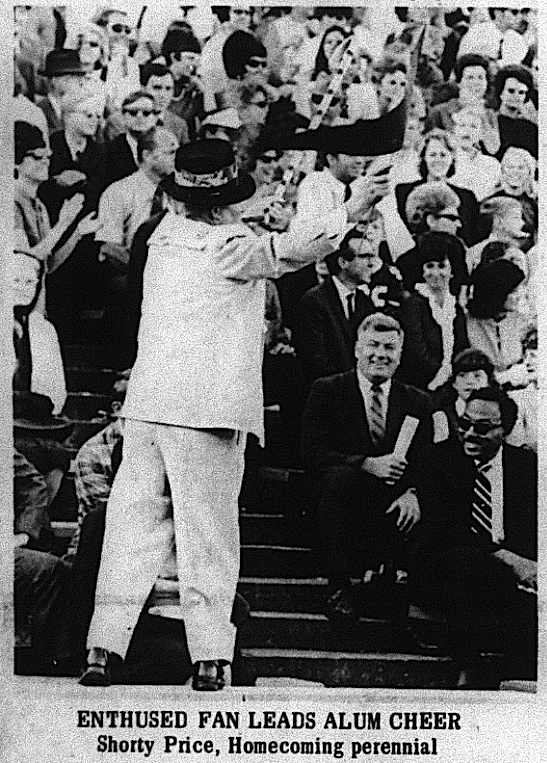 My Plainsman sarcasm meter is pretty honed; I’m getting no readings. It doesn’t appear to be a lookalike—where would you find someone that short? It’s not an April Fool’s issue. It’s Shorty Price, “Alabama’s Head Chearleader,” cheering Auburn on (once again? perennial?) in their win against Mississippi State while the Crimson Tide was losing to LSU.