Cupcake Girl hands out free cupcakes on the Haley concourse, and each time someone takes one, she smears icing across her face. Some stand back and watch hesitantly; some won’t even shoot her a glance.

“I think my favorite reaction was from a guy standing back who said, ‘You really like frosting. I can tell,” said Emily Quinn, senior in fine art.

Cupcake Girl began as Quinn’s social experiment project for her digital media art class, but soon developed into its own character.

“I began thinking of how people would react, thinking about it in terms of spectacle and attraction versus repulsion,” Quinn said. “Will people take a cupcake because they want me to put icing on my face? Or will they not take one because I have icing on my face? I didn’t really know how students would react.”

Quinn’s project expanded over the course of the semester, and every other week Quinn was on the concourse offering cupcakes, smearing icing and receiving a handful of reactions. 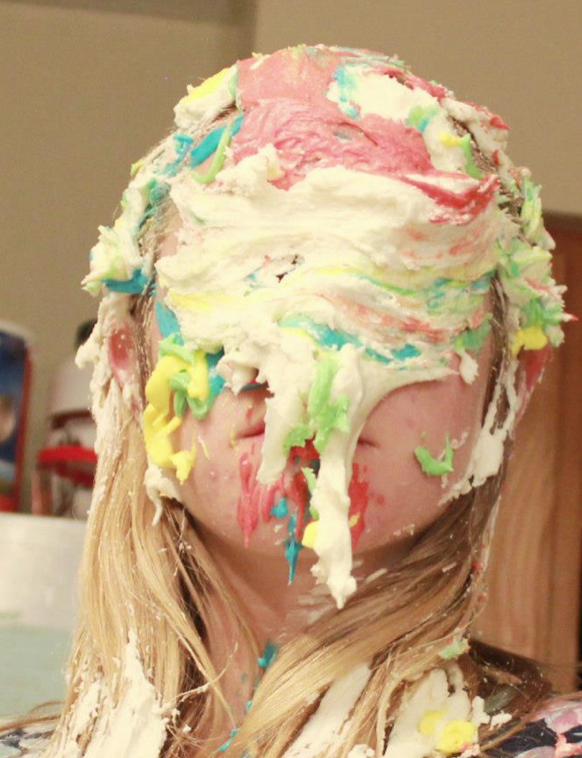 Quinn shortly realized that Cupcake Girl was much more than just a documentary-ish experiment when she performed as Cupcake Girl in her kitchen.

“A friend taking the pictures and I were able to get up close and personal with the camera right up in the dripping icing, and I was able to get that extra control of what she (Cupcake Girl) looked like and how she reacted.”

Once Cupcake Girl started to take on her own character, the idea of childhood versus adulthood became Cupcake Girl’s central theme.

“She’s giggling and being messy while eating, which is very childlike, but at the same time, here I am doing something very unexpected or unacceptable as an adult. It’s an unusual mix that is funny, yet disturbing.”

Quinn said she intentionally wanted to create this sort of confusion between Cupcake Girl and students on the concourse.

“I wanted people to think about the way our society has constructed these ideas of childhood versus adulthood, and how a lot of college students feel that they’re in an awkward stage of being a child and adult.”

Quinn said she wanted students to question why those ideas are distinct, and she used “humor and the grotesque” to keep students interested enough to talk to them about performance art.