Nissan ain’t the only car company coveting college football fan cash. Open the latest issue of Sports Illustrated and you’ll find a photo of a house literally divided (at least aesthetically) by the Auburn-Alabama rivalry. The two-page ad is the latest in Hyundai’s “Loyalty” campaign, which seeks to beef up the business benefits of its sponsorships of athletic programs at Auburn and 15 other universities by proving just how well it knows your team and how you feel about it. This particular ad reflects just how well Hyundai knows Auburn and Alabama fans—it employs around 3,000 of them in its Montgomery factory, its first in the U.S.— with a very organic, drive-by-Twitpic-from-Pinson kinda vibe. (Take notes, Old Navy.) 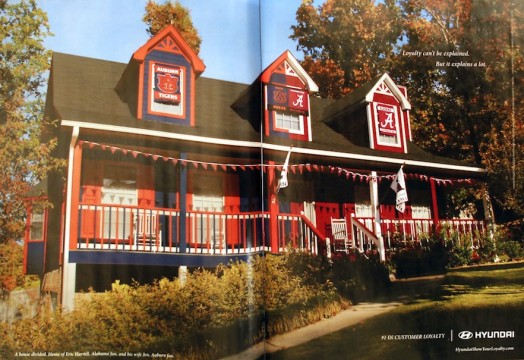 The copy reads “Loyalty can’t be explained but it explains a lot.”

Hyundai kicked off the Loyalty campaign last year with shot of Toomer’s Corner being rolled after Auburn won the BCS National Championship Game.