Hi, I’m Jerry. I used to post here a lot. This is what I hope will be a series of brief posts on Auburn’s 2012 coaching transition. 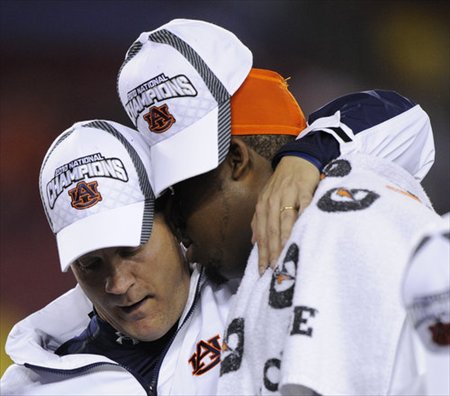 Listen: yes, damn it, it was worth it.

Don’t care how many times the guy at the airport is referred to as a prophet. Don’t care that Chizik made thousands of Auburn fans who relentlessly defended him for the better part of three years (myself included, most of the time) look like the gibbering blind fools so many outside of Auburn believe us to be.  Don’t even care that the first half of the Texas A&M game was the single most hopeless moment I have ever felt watching Auburn football, the furthest into the black abyss of despair my team has ever flung me. (Yes, it was that bad. Shut up.)

I care about 49-0 and Reuben Foster’s tattoo some, yes. But not enough to answer the question “was it worth hiring Gene Chizik?” with anything other than the loudest YES I can muster.

Because what I really care about was that night in Glendale, not even two full calendar years ago–it cannot possibly have been that recent, can it?–when I sat in the upper deck of an alien domed stadium because they don’t play national title games at Jordan-Hare and still watched Auburn rush out of their tunnel. Auburn, actually in that strange place where they do play national title games–the navy blue jerseys, the burnt orange stripes on the sleeves pants, the white helmets with the Auburn logo I’d scrawled unrecognizably across a hundred sheets of notebook paper in 9th-grade geometry, each time daydreaming of that night or something like it.

They were there, right there. My Auburn Tigers. And then Kodi Burns scored a touchdown, Nick Fairley opened a fissure in the earth Darron Thomas fell into, Michael Dyer showed us exactly how much talent he’d waste, Wes Byrum kicked a field goal, and I watched that silly confetti fall from the rafters happier than I thought sports could make me.

That doesn’t happen if Gene Chizik isn’t hired to replace Tommy Tuberville. Some other team runs out of that tunnel, some team in different jerseys and helmets that doesn’t have Gus Malzahn as its offensive coordinator, Cam Newton as its quarterback, some team that didn’t have Chizik do whatever he did to keep it on its even keel amidst the Cam maelstrom and half-a-dozen deficits that should have been the end of it. (Surely, surely we can give Chizik this tiny crumb of credit). With another head coach at Auburn, someone else sits in the seat I sat in. Someone else gets to be that happy. Someone else is in this picture: 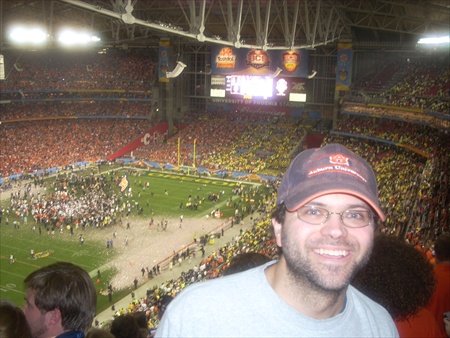 It’s true: it’s possible that some other coach could have found a way to guide that remarkable group of seniors to the same end result. But some three months and change before that night in Glendale, I became a father. It’s possible I could have fallen through some other leg of what Terry Pratchett called “the trousers of time,” gone somewhere else for college, married someone else, had some other daughter, been almost as happy. But I can’t look at my daughter and consider a universe where she doesn’t exist, exactly as she is, and not be revolted. Likewise, if you’ll forgive the over-the-top metaphor — she was born midseason during an Auburn national championship run — so I can’t look at that picture and even begin to wish Auburn had hired some other coach in 2008.

That’s not to say Jay Jacobs made the right decision, mind you. Sometimes a freshman quarterback will roll out, think he’s spotted an open receiver in the middle of the field, throw an across-his-body duck into a thicket of defenders, and have his receiver come down with the ball anyway because sometimes that happens. Sometimes a subpar athletic director will hire a 5-19 head coach who’s not actually one lick better than that record suggests, but who has one brilliant idea about who his offensive coordinator should be and who’s (just?) smart enough not to look the gift horse of Cam Newton in the mouth, one that comes down with a crystal football anyway because at Auburn sometimes undefeated seasons happen.

Chizik earned his pink slip. I’m of the opinion (one helped merrily along by the hoops teams’ failures) that Jacobs has earned one, too. But was it worth it? I watched my Auburn Tigers win a national championship. Of course it was.