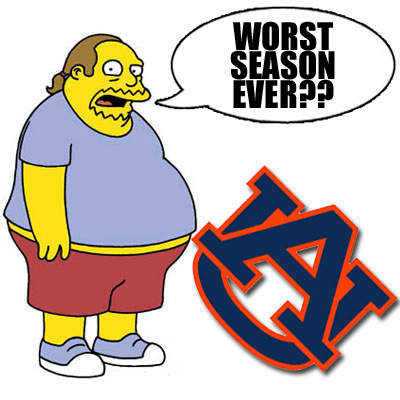 We have to preface this column by saying, no, we are not enjoying the negativity either.  But, unfortunately, that is precisely what this season is giving us, and we have no choice but to react to it and try to work through it as best we can, in a thoughtful and analytical and above all else realistic way.  If you want sunshine and rainbows rather than cold, hard reality, that’s fine—but it won’t make things get better in the short term or the long term.

So—just how bad have things gotten for the Auburn Tigers?  Is this really the worst season ever, or does it just seem like the worst because we’re currently stuck in the middle of it?  This week, your intrepid Wishbone columnists dug deep into the record book to answer this important question.

What are the Worst Seasons in Auburn History—and Why?

Auburn has been playing football for 121 years.  Looking back at the records, the following seasons stand out as the absolute worst:

1894: Auburn finished 1-4.  (We did beat Georgia Tech 94-0, though, which warms our hearts a little bit.)  That season got Coach F.M. Hall fired and resulted in the hiring of new coach John Heisman.  Perhaps you’ve heard of him.

1906:  Heisman had packed up and moved on to Clemson a few years earlier, and Auburn ended up with a record of 1-5-1.  The Tigers beat Maryville (who?!) and tied Gordon (who?!) and no, we don’t believe either of those schools currently fields a Division 1 football team*.  Coach Mike Donahue was let go after this season but then came back one year later and proved to be very good.

1928:  Auburn went 1-8.  Other than in games against Tulane and Samford, Auburn did not score a point all season.

1929:  Auburn finished 2-7 and fired Coach George Bohler during the season. (Which seems crazy—the dude got us 100% more victories in each of his two seasons than we had the year before!  Seven more seasons and we would have been undefeated!   Hah.)

1950:  Auburn went 0-10 and 0-7 in the SEC.   This season included losses to Tulane, SE Louisiana and Wofford.  (Auburn lost to Wofford?!)  The Tigers scored 31 points all season and were shut out in seven games.   Coach Earl Brown was executed after the season—err, we mean, he resigned after the season—and the new coach Auburn hired was a fella by the name of Ralph “Shug” Jordan.

1952: This is the most utterly recent horrendous season that folks point back to. Auburn went 2-8 and 0-7 in the SEC in Shug’s second season as coach.  Fortunately, the Powers That Be didn’t pull a “Bohler” on him and blow him out at that point.  Eisenhower won the presidency, the Korean War was winding down, and Shug was getting his groove.  Good times were ahead.

1980: The Tigers ended up 5-6 overall and 0-6 in the SEC, even with James Brooks in the backfield as a senior.  This was the final straw for Doug Barfield and led to the hiring of one Patrick Fain Dye.

1998: Auburn finished 3-8 and 1-7 in the SEC, the year after winning the SEC West and falling by a single point to UT in Atlanta.   Coach Terry Bowden resigned mid-season and Defensive Coordinator Bill Oliver finished the year as interim head coach.  Injuries plagued the team—at one point the Tigers were down to their sixth string center.  Additionally, true freshman Gabe Gross had to start on the road in Starkville and that didn’t go well.  (Having a QB wearing the jersey number “22” never seemed like a recipe for good mojo, either.)  The victories came over Central Florida (in a very close game), Louisiana Tech and (in a shutout) Ole Miss—coached by the man who was about to replace Bowden/Oliver, Tommy Tuberville.

So there it is: A parade of ugly.  What was the ugliest of the ugly?  It’s hard to say.  We can toss out those very early ones and probably agree that 1927-29 and 1950-52 were bad runs, but football wasn’t quite then what it has become in the modern era. And, in any case, the 1952 ugliness was just a symptom of Shug turning things around—it represented a beginning, not an ending.  In 1980 Barfield was already on thin ice—that season didn’t just materialize out of nowhere.  He’d turned in mostly subpar results in each of his five seasons, even with the Cribbs/Brooks/Andrews triumvirate in the backfield.  That leaves 1998, which may well be, pound for pound and all factors considered, the worst season in Auburn history.  It led to the departure of not just one but two coaches (Bowden and Oliver), and caused a shocked Tommy Tuberville to exclaim, upon accepting the head coaching job afterward, that he was surprised at just how bad the situation he was walking into had turned out to be.

We would love to hear your views on which season was the worst—leave a comment at the bottom of this page.

A Few Words about Phillip Lutzenkirchen

Now that his time on the field is over—just as we have finally learned how to spell his name properly—how do we feel about Phillip Lutzenkirchen?  Where does he rank in the pantheon of Auburn tight ends?  First, we will always have warm feelings for Lutzenkerchen for this.

Catch the game-winning pass in the biggest comeback ever against Alabama and invent a dance move at the same time?  You will become a cult hero.

We will always remember him as a key part of the magical 2010 season and for the big plays he made that year. We will also remember how his senior year did not turn out as well as anyone hoped.   And some of us had high hopes – we predicted he would win the Mackey Award as the best tight end in America this year and that isn’t going to happen. Auburn’s failure to fully take advantage of what Lutzenkerchen can do is one of the many mysteries of this season.

Auburn is most famous for generating great running backs but has also turned out a large number of excellent tight ends.  The 1980s teams produced Ed West, Walter Reeves, and Ron Middleton – all of whom played many years in the NFL.  Fred Baxter has to be mentioned as one of the best players at that position in Auburn history.  Baxter finished his Auburn career with 58 catches for 768 yards and 3 touchdowns and then went on to a twelve-year NFL career.  In the early 2000s Lorenzo Diamond and physical freak Robert Johnson were good tight ends.  (You can see Johnson hurdling over a Tide player into the end zone in the 2002 Iron Bowl at the 1:44 mark here.) After that Cooper Wallace arrived on the scene, eventually to become the record holder for catches and yards for a tight end at Auburn with 63 catches for 829 yards.

Lutzenkirchen finished his Auburn career with 59 catches for 628 yards and 14 touchdowns.  He holds the record for career touchdowns among tight ends at Auburn but should have held all the receiving records; had this season gone only a bit better, and he not gotten hurt, he would have had them easily.  Like many of his predecessors he gave up the gaudy passing numbers and helped the team by staying in to block.  Indeed, his blocking during the 2010 championship run was tremendous and was one of the reasons that Auburn was able to have the success on offense that it had.  He will be missed.

More of Van and John Talking about This Stuff? Really?

In case you haven’t heard, the Wishbone Podcast debuted this week after the Vanderbilt game.  In the first episode, we discussed the future of Gene Chizik, Scot Loeffler and the question of hiring Bobby Petrino.   Listen to it while taking a walk in the evening or while stuck in traffic.  We hope you enjoy—at least, as much as possible, given the current state of affairs that we have to discuss.  And be sure to let us know what you think.

Because we live so far away we won’t be at the game against Texas A&M this Saturday night.  But if we were there we would cheer and yell and support our team.  We would never boo Auburn in our stadium or boycott the game or anything like that.  The players are kids working as hard as they can and doing their best and they deserve our support. Texas A&M has never been to Jordan-Hare and even if they win they deserve to leave thinking “that was a tough place to play and those people are good fans and are very loud.”
War Eagle.

The Elite:
Alabama.  (We look forward to this MSU game being close for 20 minutes or so.)

The Very Good:
Florida.  (After a dominating win over Visor Boy—who really looked like he was anxious to climb aboard the team bus and get out of Dodge—UF gets to continue its ownership of UGA).

LSU  (An impressive win on the road at College Station.   An ugly, Les Miles-style win.  Now they get a week off to prepare for bama’s visit to Baton Rouge.)

South Carolina  (And things had been going so well…!)

MSU  (Tyler Russell is excellent but the MSU defense can’t stop bama on the ground or get pressure on the quarterback.  The Dreams of Cowbell Glory come to a crashing end on Saturday.)

The Good:
Texas A&M  (Now you know the power of the dark side of the force in Les Miles hands.)

The Not Good:
Ole Miss  (But this represents real progress for them!)

Tennessee (Dooley earlier this week was spotted sitting on his stool in the hallway while Jon Gruden was measuring the windows in his office for new drapes.)

Vanderbilt (You powerhouse, you.)

The Wretched:
Arkansas
Auburn
Kentucky (On one end of the spectrum we have Bama-MSU and on the other end we have Kentucky – Mizzou….)