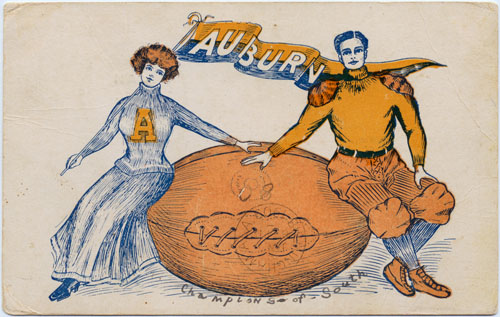 “I’m a Bama fan and collector, but I came across this about 20 years ago at an antique shop in Birmingham.  I thought you and your readers might enjoy it.  It’s an Auburn football postcard from right after the 1908 season and it’s postmarked January 8, 1909.”

Sometimes inspiration comes from the most unexpected places. I started trying to pull together a post for this week the other night, but was missing that final something to really pull it together. That something came this morning when I received the above postcard from a self-confessed Alabama fan. 1908! Now that is a relic. The 1908 Auburn football team finished the season 6-1, with every win coming via shutout, giving some merit to the postcard’s “Champions of [the] South” claim.

I really hope our generous contributor doesn’t get too much grief from his Crimson clad compatriots for aiding and abetting the enemy. In this season of our discontent, any gesture of goodwill is gladly accepted. 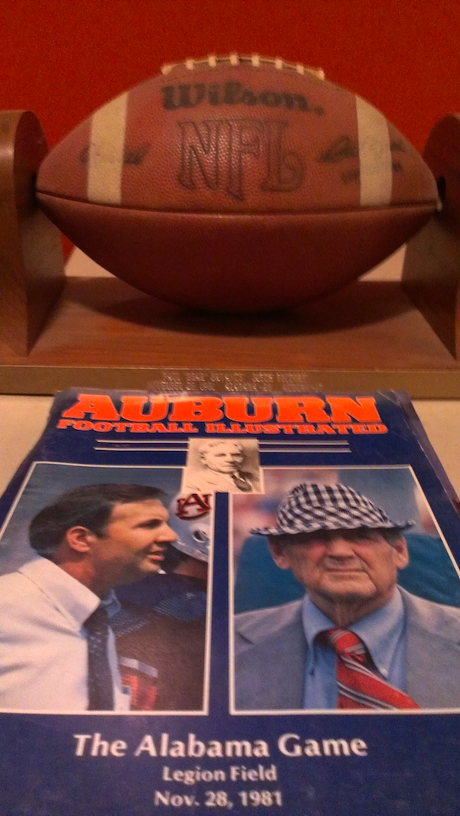 “The football is from Bear Bryant’s 315 game. Although we didn’t win that day, I always thought it was a heck of a souvenir.”

Pat Dye’s first Auburn team finished their season with a 28-17 loss to Alabama in what was Bear Bryant’s 315th career victory as a head coach, which at the time established him as the winningest coach in major college football history. I have no reason to doubt our contributor or the authenticity of this football as he has provided numerous items in the past, but anyone have any idea why the ball says NFL on it? Did they use those balls in college football back in 1981? 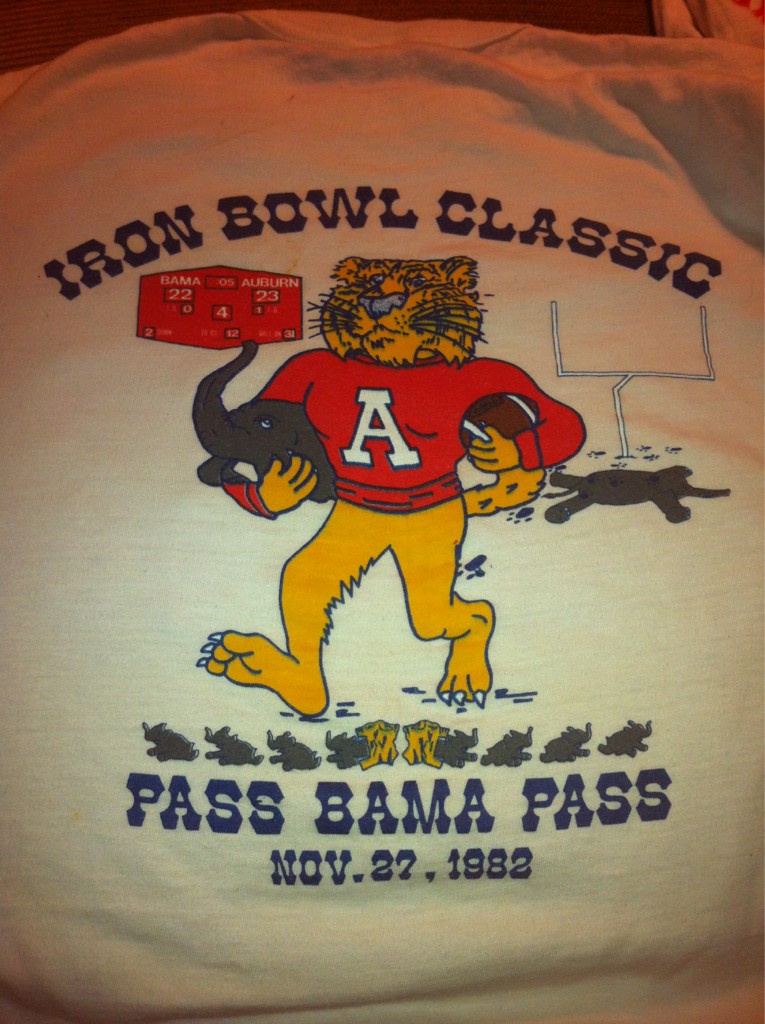 So we went from a Bama fan submitted item to a Bama victory related item. Need to cleanse the palate with a great t-shirt from what would become known as the “Bo Over the Top” game in which Auburn ended Alabama’s 9-year winning streak in the series. 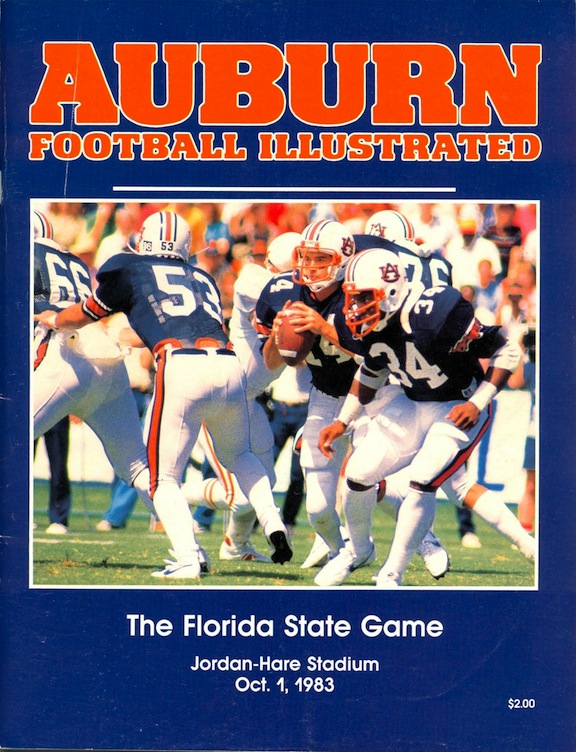 Now we go from a Bama fan item to a Bama victory item to an Auburn win item to a converted Bama fan item. Sometimes these posts just have a way of coming together in ways I never expect them to when I finally start putting them together. This is one of my favorite program covers in the non-Neel catalog. Love the way the orange facemasks just pop and the way Bo just looks like he is ready to blow someone up on a block. 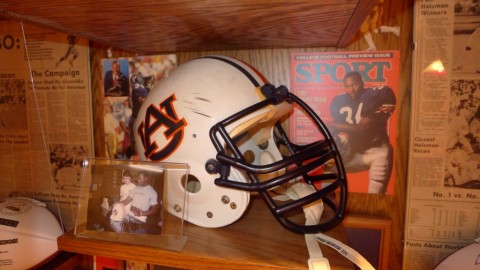 “I thought I would contribute to the relics section of TWER. Jeremy Henderson did a piece for TWER on my Bo Jackson collection earlier in the year.

This is Bo’s game used helmet from his shortened junior season. The story behind it is as follows…. Back around 1990 I ran an ad in the OA News “Searching for Bo Jackson Collectables.” I received a call from a teenager saying he had Bo’s game helmet (of course I was skeptical). The story behind it was that his family was friends with the owner of a gun shop there in Auburn that Bo frequented often. After Bo was injured he came into the shop and told the kid he had something for him…he took him outside and in the trunk of his car he had the helmet and gave it to him. They came inside where Bo signed it and took some photos. In the background you can see a pic of Bo giving him the helmet in the store. I met him at the Chili’s in Auburn at the next home game and did the deal.”

Speaking of Bo, here is one of his non-orange facemasked helmets from the following season. My favorite part of the story is that Bo frequented a gun shop, because of course he did. 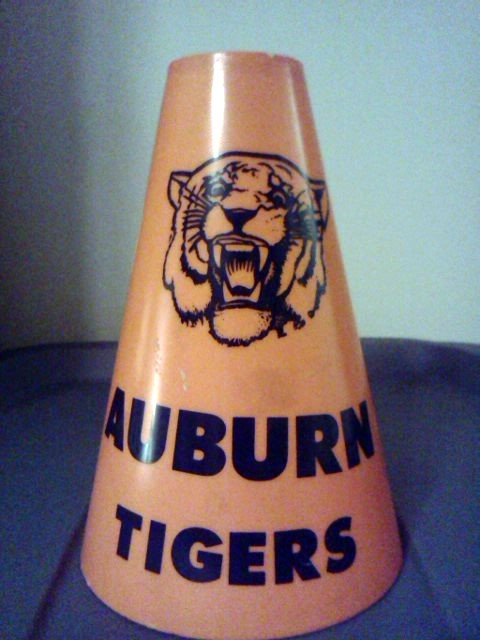 “My Dad bought the megaphone for me at the 1980 AU/Tennessee game in Auburn. That is all I care to remember from that game (UT 42 AU 0).”

This item has nothing to do with any of the others and ends us on a down note football wise, but I include it to remind us all that no matter how terrible a game or even a season, there is still some kid in that stadium watching Auburn play, maybe for the first time in their life. Don’t ruin that experience or teach future bad behavior by booing your own team or yelling obscenities at your coaches no matter how much you think they might deserve it. That’s why we have the internet and sports talk radio. In the stadium, War Eagle all day.

That’s all for this week.  To see past post, click here. Thanks again to everyone for sending me their treasures.  Please keep ‘em coming so we can continue to share them with everyone. Just snap a pic and email it to me at [email protected].