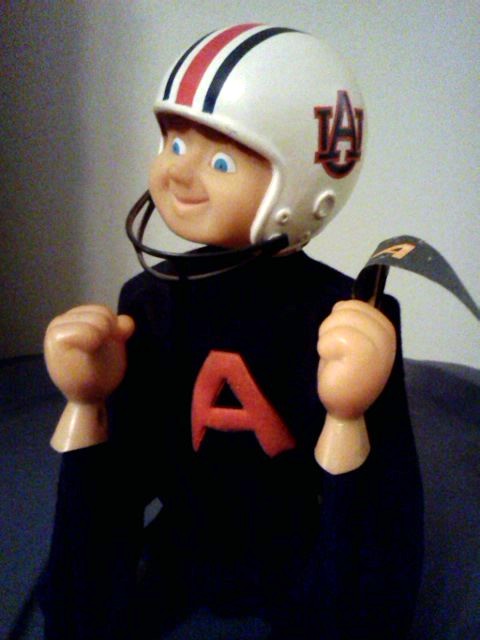 “The puppet is from the early 1980’s. My grandfather gave it to me. I have no idea where it he got it nor have I ever seen another one like it.”

I’ve never seen an Auburn puppet like this, but I had the exact same thing in South Carolina Gamecock colors as a little kid, though mine didn’t have a facemask and the pennant eventually ripped off. It had two triggers on the back that made the puppet punch out his arms when you pressed them.  It was supposed to be a cheer but it always looked more like a bare knuckle boxer. Maybe it’s the nostalgia of seeing a familiar item in the colors of my beloved alma mater, but this is now one of my favorite relics yet. 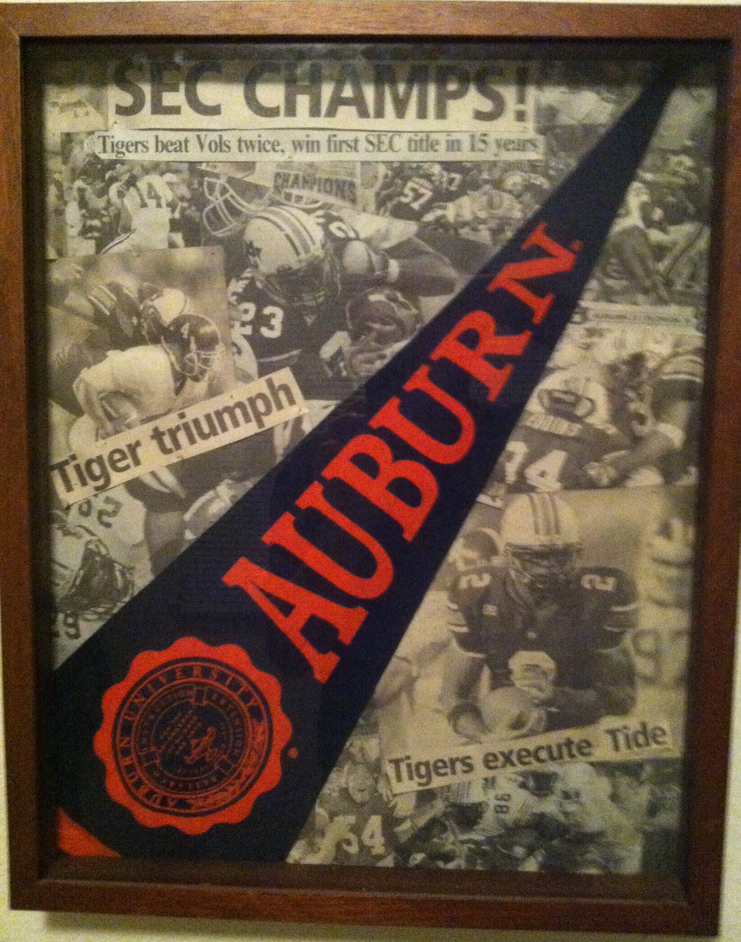 “This is a homemade tribute to the 2004 team.  That was my senior year and I happened to keep newspapers from every big win that year.  After sitting in my apartment for years, the woman who is now my fiancé suggested we make a shadow box out of the papers and lay the pennant over top.  My favorite part of this is that the pennant is actually one I stole from a table backstage when Mikael Gorbachev spoke at Beard-Eaves. I have gotten many questions about where I bought this piece and people are floored when I tell them it’s truly a one-of-a-kind. I am planning on making a shadow box coffee table from 2010 that features three separate pieces: the Camback, SEC Title game, and the National Title game. That piece will feature tickets, newspaper clippings, patches, and other keepsakes.  Hoping to have it done after the wedding!”

There is a lot to love about this homemade tribute. The clippings are great, of course, but the pennant and the story behind it might be my favorite part. Probably not a lot of Gorbachev-related Auburn artifacts out there. Can’t wait to see how coffee table turns out once Brad gets around to making it post-nuptial. 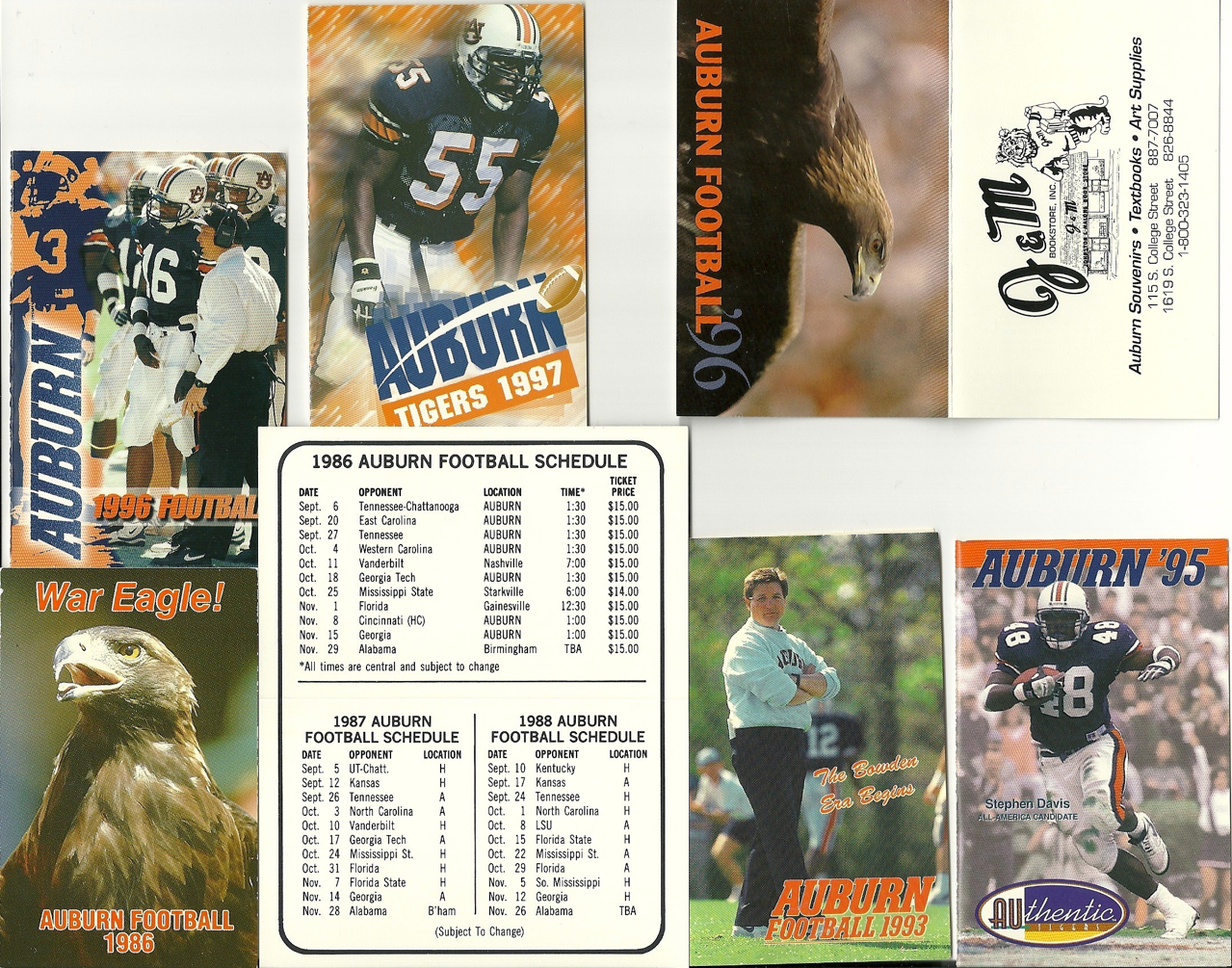 Just a great collection of pocket schedules all around. Anytime you can get Dameyune Craig, Takeo Spikes and Stephen Davis together, that’s a good thing.  A relatively svelte Terry Bowden rounds out the key figures of his era pretty well. The eagle is nice, too, and I find it interesting that the ’86 schedule included ’87 and ’88 as well. My favorite part of the whole thing though is that all the games in ’86 cost $15 except for the Mississippi State game in Starkville, which was $14 (because Mississippi State has always been worth less, space optional). Also note how many of those games were midday affairs. That would not go over well today. 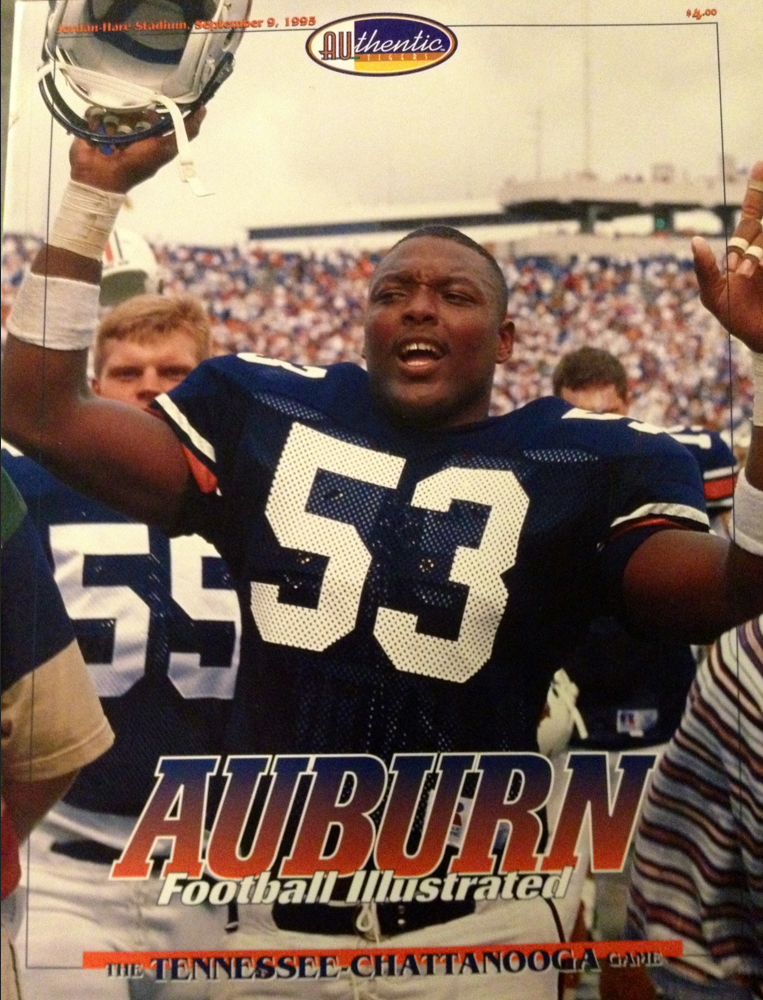 This is the program from my second game as a student in 1995 and one of the last I bought during my time on The Plains (other than the Alabama program from that same year).  I initially threw it in with the rest of the items folks were sending me because, I mean really, who keeps a UT-Chattanooga program from 1995 (even if it is officially AUthentic). Then I wondered what ever happened to coverboy Anthony Harris, so I did some Googling. He went on to have a four year career in the NFL with the Miami Dolphins.  That’s cool.  Then he became a head coach at a Florida high school.  Good for him.  Then this unfortunate bit of business. Ugh.  Which led to this: Double ugh. So, kinda wish I hadn’t pulled that program out of storage now. 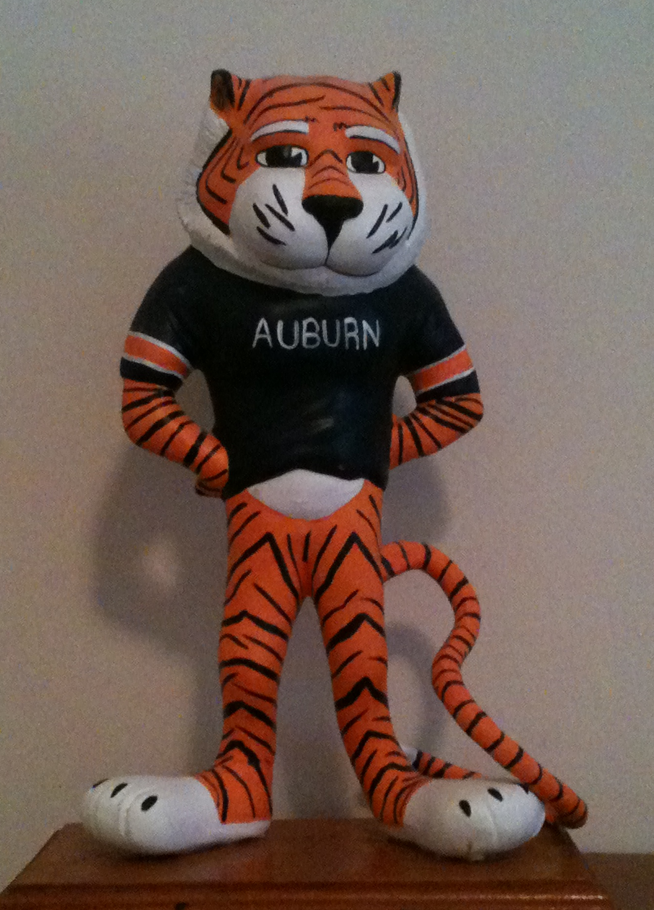 “Here is a painted Aubie statuette from my Aunt Martha. I have no idea where she got it or why I have it. It’s in the den on a shelf next to the TV.”

I couldn’t go out on such a negative note, so here is something completely good and pure, a lovely tribute to our beloved mascot.  Just looking at it makes me feel better.

That’s all for this week. For past editions, click here. Thanks as always to our contributors. To share your own treasures, email me at [email protected]. Hope you enjoyed your bye week.