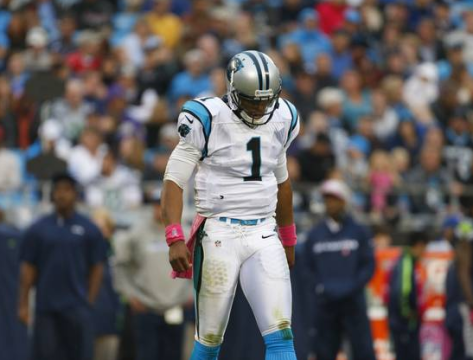 Slow week for Tigers in the NFL this week. Maybe they were stunned by the Arkansas game just like the rest of us.

Quarterbacks:
Jason Campbell #2, Chicago Bears – Jason is #2 on the depth chart with the Bears and got in the game in garbage time as Chicago destroyed the Jaguars 41-3.

Cam Newton #1, Carolina Panthers – Carolina’s struggles continued as the Panthers lost 16-12 at home to the Seahawks.  Cam struggled in the game and completed only 12 of his 29 passes for 141 yards and added 42 yards on 7 carries on the ground.  The Panthers managed just 190 net yards in the game and have fallen to 1-4.

Running Backs:
Ronnie Brown #30, San Diego Chargers – Ronnie is the 3rd down back for the Chargers and is mainly in for blocking purposes but he did get the rock a few times against the struggling Saints defense.  He had 2 carries for 27 yards and 5 catches for 47 yards as the Chargers lost 31-24 in New Orleans.

Ben Tate #44, Houston Texans – Tate is currently out with a toe injury.  He should be back this weekend.

Wide Receivers:
Devin Aromashadu #19, Minnesota Vikings – Devin has slid down the depth chart a little but was productive Sunday: 3 catches for 34 yards in the Vikings 30-7 win over the Titans.

Ben Obamanu #87, Seattle Seahawks – Ben is listed as second string and had 1 catch for 11 yards in the Seahawks 16-12 win over Cam and the Panthers.

Offensive Tackles:
King Dunlap #65, Philadelphia Eagles – Back from his hamstring injury, King did play in the 16-14 loss to the Steelers.

Guards:
Tyronne Green #69, San Diego Chargers – is currently a starter at left guard for the Chargers who lost to the Saints 31-24 on Sunday night.

Ben Grubbs #66, New Orleans Saints – Ben is the starting left guard for the Saints who beat the Chargers Sunday night 31-24 to get their first win of the year.

Brandon Mosley #67, New York Giants – Brandon was set as the backup at left guard when he injured his ankle.  The Giants have placed him on IR; he is done for the year.

Centers:
Josh Harris #47, Atlanta Falcons – Josh is the starting longsnapper for the Falcons who beat the Redskins Sunday 24-17.

Nick Fairley #98, Detroit lions – Nick and the Lions were off last week. They return to action this weekend against the Eagles.

Spencer Johnson #91, Buffalo Bills – Spencer is a backup with the Bills, he played in Sundays 45-3 shellacking by the 49ers.

Sen’Derrick Marks #94, Tennessee Titans – Sen’Derrick started for the Titans and recorded 2 tackles as the team lost another one 30-7 in Minnesota.

Jay Ratliff #90, Dallas Cowboys – Jay is still out and not practicing with a high ankle sprain. He’s slated to get his first action of the season this Sunday in Baltimore.

Outside Linebackers:
Quentin Groves #54, Arizona Cardinals – Quentin is a backup with the Cardinals, he played in the Cardinals disappointing 17-3 loss in St. Louis on Thursday night, he did not record a stat.

Will Herring #54, New Orleans Saints – Will got the start again this week but did not record a stat in the Saints 31-24 win over the Chargers.

Karlos Dansby #58, Miami Dolphins – Karlos and his Dolphins got a big win defeating the Bengals 17-13 Sunday to earn them their second win of the season.  Karlos had 5 tackles.

Takeo Spikes #51, San Diego Chargers – Is a starter and Captain for the Chargers but his snaps have been limited, he recorded 3 tackles in the31-24 Sunday night loss to the Saints.

Cornerbacks:
Pat Lee #26, Oakland Raiders – Pat is a starter for the Raiders who had a bye this week.

Jerraud Powers #25, Indianapolis Colts – Jerraud and the Colts pulled off the huge upset when the beat the Packers Sunday in Indianapolis.  He had 4 tackles, a pass deflection, and his first interception of the year in the 30-27 win.

Carlos Rogers #22, San Francisco 49ers – Coming off his huge game last week Carlos had a rather pedestrian day, only recording 3 tackles in the 45-3 destruction of the Bills.