Quarterbacks:
Jason Campbell #2, Chicago Bears – Jason is #2 on the depth chart with the Bears and did not play in Monday night’s win over the Cowboys.

Cam Newton #1, Carolina Panthers – Cam had a very good game that ended badly, completing 15 of 24 passes for 215 yards and 2 TDs while adding 86 yards and another TD on the ground on 9 carries.  The game came down to the last minute and Cam had what looked like a first down on 3rd and short that would have let the Panthers run the clock out, but fumbled.  The Panthers recovered, but it was short of the first down.  The Panthers then punted and downed the ball at the one, but Matt Ryan threw a prayer on first down that was miraculously completed at the 40 yard line.  A few plays later and the Falcons kicked the game winning field goal to steal the win, 30-28.  On Monday, Cam was taking all the blame.

Running Backs:
Ronnie Brown #30, San Diego Chargers – Ronnie is still being mainly used as a blocking back and had no carries in the Chargers 37-20 win over the Chiefs. He continued to help in the passing game with key blocking and also caught 3 passes for 50 yards.

Ben Tate #44, Houston Texans – Ben had 5 carries for 11 yards and 2 catches for 3 yards in the lopsided 38-14 win over the Titans. He was slowed by a toe injury that also had him miss practice on Monday. 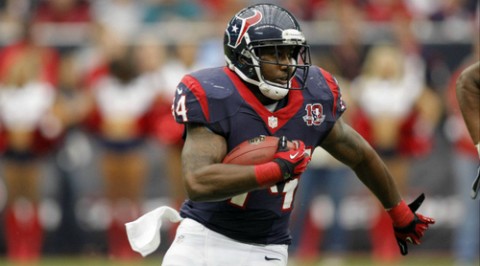 Wide Receivers:
Devin Aromashadu #19, Minnesota Vikings – Devin has been up and down the depth chart all year.  This week he was on the down side and listed as #3 outside. He played in the Vikings 20-13 win over the Lions but did not record a stat.

Ben Obamanu #87, Seattle Seahawks – Ben is listed as second string and played in the Seahawks surprising 19-13 loss to the Rams but did not record a stat.

Offensive Tackles:
King Dunlap #65, Philadelphia Eagles – King has a hamstring injury and did not play Sunday.

Guards:
Tyronne Green #69, San Diego Chargers – is currently a starter at left guard for the Chargers who beat the Chiefs 37-20 in Kansas City.

Ben Grubbs #66, New Orleans Saints – Ben is the starting left guard for the Saints who have extended their bad start to 0-4 after a close 28-27 loss to the Packers in Green Bay.

Centers:
Josh Harris #47, Atlanta Falcons – Josh is the starting long snapper for the Falcons and the only Tiger from last year’s team currently getting any playing time.  With seconds to go in the game against Carolina the Panthers called a timeout in an attempt to freeze the kicker.  Josh smartly snapped it anyway to give his kicker a free practice shot.  Both kicks went through and the Falcons beat the Panthers 30-28.

Nick Fairley #98, Detroit Lions – Nick is currently getting playing time as Suh’s backup and recorded only one tackle in the 20-13 loss to the Vikings.

Spencer Johnson #91, Buffalo Bills – Spencer is a backup with the Bills. He played in Sundays 52-28 loss against the Patriots, but did not record a stat.

Sen’Derrick Marks #94, Tennessee Titans – Sen’Derrick has started that last two games for the Titans after being slowed by an injury. He recorded one tackle in the Titans 38-14 loss to the Houston Texans.

Jay Ratliff #90, Dallas Cowboys – Jay is still out and not practicing with a high ankle sprain.

Outside Linebackers:
Quentin Groves #54, Arizona Cardinals – Quentin is a backup with the Cardinals. He recorded 1 tackle on Sunday in the Cardinals 24-21 win over the Dolphins.

Will Herring #54, New Orleans Saints – Due to injuries Will got the start in Green Bay and had 1 tackle in the Saints 28-27 loss to the Packers.  He will likely have the start again this week at home against the visiting Chargers.

Karlos Dansby #58, Miami Dolphins – Karlos was amped up to play his former team in Arizona, and he had a good game in the 24-21 loss to the Cardinals.  He had 7 tackles, a sack, and a pass deflection.

Takeo Spikes #51, San Diego Chargers – Takeo is a starter and captain for the Chargers. He had just two tackles in the 37-20 win over the Chiefs, but did force a fumble. 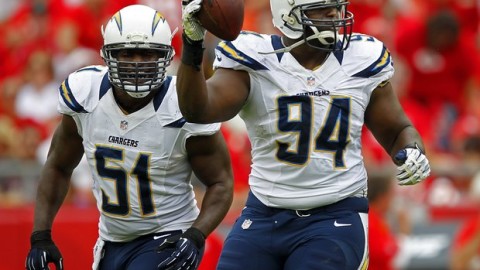 Cornerbacks:
Pat Lee #26, Oakland Raiders – Pat is a starter for the Raiders and had 5 tackles and a pass deflection in the 37-6 loss to the Broncos.

Jerraud Powers #25, Indianapolis Colts – Jerraud and the Colts had the week off this week.

Carlos Rogers #22, San Francisco 49ers – Carlos had 3 tackles and a fumble return for a touchdown as his 49ers embarrassed the Jets 34-0 in the Meadowlands.  He talked a little trash on Tuesday, saying that the Jets “quit” in the game.