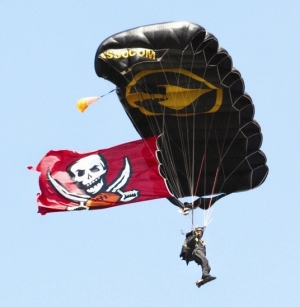 Military paratroopers, or Para-Commandos, will be included in Auburn’s special halftime show celebrating Military Appreciation Day at the Texas A&M game on Oct. 27. There will also (finally) be a pre-game F-16 flyover.

AUBURN — To honor the men and women who serve and have served this great nation in military service, Auburn University has scheduled numerous military-themed events as part of Military Appreciation Day on Oct. 27 when Auburn hosts Texas A&M at Jordan-Hare Stadium at 6 p.m.

* Show Some Pigskin: An Illustrated Guide to Auburn’s Playboy All-Americans
* Auburn-educated astronaut wanted ‘War Eagle’ to be first words on the moon
* Auburn’s Legend of Zelda
* That time they burned the Glom
* Auburn’s 1960 cheesecake schedule
* I think of Kurt Crain