A new food industry craze has officially landed at Auburn University, and with it more variety and quicker options for students eating between class.

Over the past several months, a veritable a convoy of mobile food trucks have set up shop all campus. The man responsible for the truck takeover, now known as the Tiger Traxx campaign, is Retail Operations Director for On Campus Dining Bill Sallustro. Sallustro noticed the success of the Atlanta Food Truck Company in Atlanta and its surrounding suburbs, and thought the concept would add variety and points of service for students. 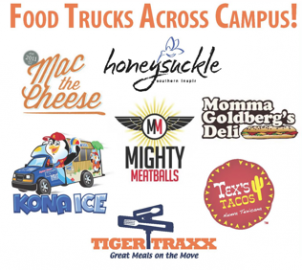 Auburn introduced its first two food trucks to campus in spring semester 2012, the Domino’s Mobile Pizza Kitchen and the now legendary Texas Tacos. Both trucks gained immediate popularity and a steady flow of customers who were happy to dodge the long lunch rush lines in Foy and the Student Center. Within weeks, Texas Tacos gained an almost cult following. Its lines seemed to rival those of the Student Center’s Chick-Fil-a, reportedly one of the restaurants busiest stores in the nation. The social media buzz on campus about the new taco truck—rumors even swirled of adding a line to the Auburn Creed dedicated to the delicious tacos—told Sallustro and the rest of the campus dining front office they had struck gold.

By the end of the spring semester, Auburn had added two more trucks—Kona Ice, who easily cashed in serving shaved ice to students melting in the Alabama humidity, and Auburn’s own Momma Golberg’s who refused to take a back seat to out of town competition. But it was still only the beginning.

Auburn debuted three new food trucks this semester: Mac the Cheese (homemade dishes from family recipes), Mighty Meatballs (“One of Auburn University’s premiere food trucks!” according to the company’s website), and Honeysuckle Gelato, bringing the truck total to six mobile dining options (Domino’s is currently out of rotation for those keeping count) in the campaigns first year.

And more are likely coming.

According to Campus Dining’s Marketing Director Gina Groome, the Tiger Traxx campaign has contacted and been contacted by several more food trucks interested in bringing their business to Auburn.

Will the increase in food trucks simply shift the long lines from the Student Center to the already busy concourse?

According to Groome, no—Tiger Traxx not only recruits food trucks to Auburn, but also sets a rotation schedule intended not only to maintain dining variety but to help Auburn students keep on truckin’.