Cam Newton #1, Carolina Panthers – Cam did not have a good game nor did the rest of the Panthers. They hosted the Giants at home and got embarrassed 36-7 on Thursday night.  Cam completed 16 of 30 passes and threw 3 INTs. He scored the team’s only touchdown with a SuperCam dive over the top in the 3rd quarter, and gained 6 yards on 6 carries.

Running Backs
Ronnie Brown #30, San Diego Chargers – With Ryan Matthews back from injury, Ronnie was actually put on the inactive list for the Chargers 27-3 loss to the Falcons.

Mario Fannin #42, Denver Broncos – Mario is on injured reserve with Denver and will be on the practice squad when he returns from his Achilles injury.

Ben Tate #44, Houston Texans – Ben ran for 26 yards on 8 carries in the Texans 31-25 win over the Broncos.  He had a costly fumble with about 10 minutes to go in the game that sparked a comeback from the Broncos; luckily it didn’t cost them the game.

Carnell Williams – Carnell isn’t currently on a roster but is rumored to be in talks with the Lions.

Wide Receivers
Devin Aromashadu #19, Minnesota Vikings – Devin is now the starting outside receiver for the Vikings. He caught 2 passes for 24 yards in the Vikings shocking 24-13 upset win over the 49ers .

Ben Obamanu #87, Seattle Seahawks – Ben is listed as second string and was an active player for the Seahawks Monday night in their infamous 14-12* win over the Packers.  Ben caught one pass for 8 yards and also downed a punt close to the 1 on special teams.

Offensive Tackles
King Dunlap #65, Philadelphia Eagles – King has a hamstring injury and did not play in the Eagles disappointing 27-6 loss in Arizona to the Cardinals.

Marcus McNeill — Marcus was released by the Chargers after injuries have severely damaged his career.  The Jets worked him out three weeks ago but the OT is continuing to ponder retirement.  Marcus always had spinal stenosis. Even though he was a very talented player, his career was always time sensitive.

Guards
Tyronne Green #69, San Diego Chargers – Green is currently a starter at left guard for the Chargers who lost to the Falcons 27-3 Sunday in San Diego.

Ben Grubbs #66, New Orleans Saints – Ben is the starting left guard for the Saints who have extended their bad start to 0-3 after blowing a 24-6 lead to the Chiefs and losing 27-24 in OT.

Centers
Josh Harris #47, Atlanta Falcons – Josh is the only Tiger from last year’s Auburn team that is getting any playing time at the moment as the Falcons long snapper.

Defensive Tackles
Zach Clayton #69, Tennessee Titans – Zach is currently on the practice squad for the Titans..

Nick Fairley #98, Detroit lions – Nick is currently getting playing time as Suh’s backup and did not record a stat in the Lions 44-41 loss to the Titans in Tennessee.  He was however penalized in the second quarter for imitating the snap count.  Way to get on the stat sheet, big guy.

Spencer Johnson #91, Buffalo Bills – Spencer is a backup with the Bills and had a batted pass in the 24-14 win over the Browns.

Sen’Derrick Marks #94, Tennessee Titans – Finally getting on the field after his injury, Sen’Derrick started the game and recorded 6 tackles, 4 solo in the Titans 44-41 win over the Lions.

Jay Ratliff #90, Dallas Cowboys – Jay has a high ankle sprain and is still out.

Outside Linebackers
Quentin Groves #54, Arizona Cardinals – Quentin is a backup with the Cardinals, he recorded 2 tackles and a sack this week as the Cardinals beat the Eagles 27-6.  He also had a very hard hit on Michael Vick late in the first half. Vick fumbled on the next play the next play and the Cardinals returned it for a TD.

Will Herring #54, New Orleans Saints – Will is second string in New Orleans, he did not record a stat in the 27-24 OT loss to the Chiefs.

Inside Linebackers
Josh Bynes #56, Baltimore Ravens – Josh is on the Ravens practice squad

Karlos Dansby #58, Miami Dolphins – Karlos is the starting middle linebacker for the Dolphins and had 8 tackles (7 solo) and a pass deflection in Miami’s 23-20 OT loss to the Jets.

Takeo Spikes #51, San Diego Chargers – Takeo is a starter and captain for the Chargers. He had 13 tackles in the 27-3 loss to the Falcons.  He’s currently 7th among active players for career starts with 202 and he’s the youngest in the top 10.

Cornerbacks
Pat Lee #26, Oakland Raiders – Pat started for the Raiders and recorded 4 tackles (3 solo) and forced a fumble that the Raiders recovered and led to the game tying field goal late in the 4th quarter, the Raiders went on to win 34-31.

Jerraud Powers #25, Indianapolis Colts – Jerraud started for the Colts and recorded 2 tackles but lost an interception in the endzone when he was ruled out of bounds.  The Colts lost to the Jaguars 22-17. 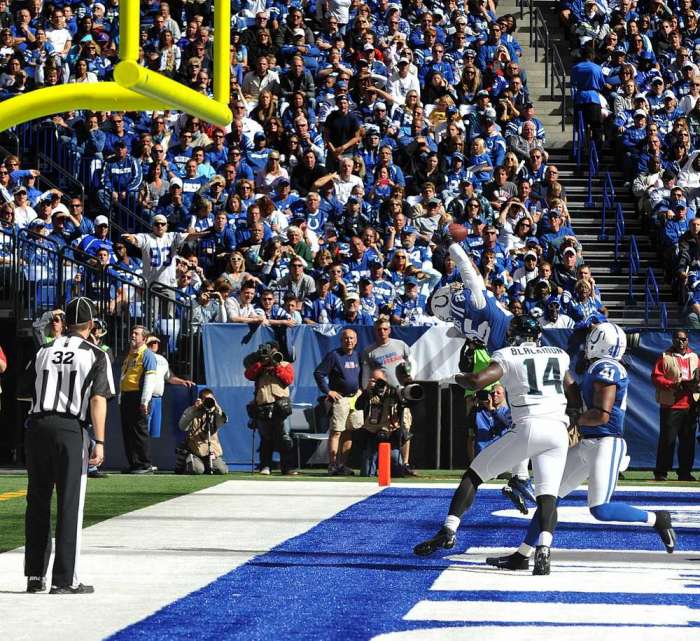 Cam photo via; Jerraud photo via.