Auburn grad Chad Gibbs, author the best-selling God & Football: Faith and Fanaticism in the SEC, is graciously allowing us to post an excerpt—a good one— from his new book, which asks whether Alabama fans can go to heaven, i.e., how Christian fans can love their enemies, when they can’t even love their rivals.

Last Christmas, after opening presents, but before the turkey-induced nap, my in-laws and I discussed my plans for a second book.

They nodded, their faces revealing concern for their youngest daughter, who had apparently married a man who considers books about football romantic. 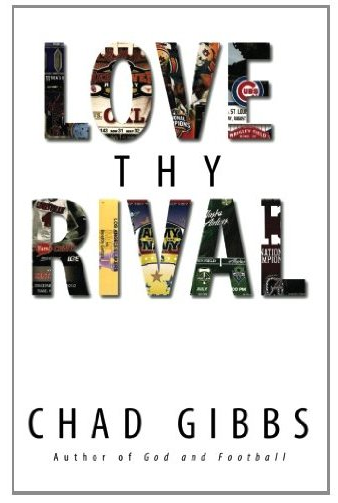 My mother-in-law, who was still angry her scene from my first book was cut by the editor, asked, “So what’s this new book going to be about?”

“I want to write a book on rivalries, and not just in college football, but the most intense rivalries in all of sports. I want to look at how fans in these rivalries interact, and more importantly, I want to examine the role of hate in sports.”

At that moment, my niece Ava, who is wise beyond her three years, gasped and said, “Uncle Chad, we’re not supposed to say hate.”

The rest of the family smiled, then mockingly scolded me for using the four letter word.

If a man say, I love God, and hateth his brother, he is a liar.

It was 2:30 a.m. when I finally looked at the clock to know the full measure of my shame.  I couldn’t believe it.  I had gone to bed four and a half hours ago, exhausted, but now felt as if some demented nurse was giving me Red Bull intravenously.  I shut my eyes again. The dread was still there though, the dread that began with this simple thought: “If we win the toss tomorrow, I wonder if we’ll kick or receive.”

That question was all it took to flood my mind with nightmare scenarios, all ending with an Auburn loss to Alabama and, for some reason, me being thrown off the top of the upper deck.  I gave up and turned on the television.  ESPN was replaying a panel of talking heads breaking down tomorrow’s, make that today’s game.  Three of them thought Auburn would win, while one was convinced we would lose, and for some reason I decided that man had the most important opinion on earth.  As the dread increased, I turned off the television and tried to sleep, tossing and turning for hours.  Eventually I counted sheep, but even this proved harrowing, as the eighth one mutated into Alabama receiver Julio Jones, who sprouted wings, making him virtually impossible to cover man to man.  Okay, I may have fallen asleep at this point, but even the two and a half hours I did sleep were not restful.

I had a book signing that morning in Tuscaloosa before the game.  My first book, God and Football, had released three months earlier.  I’d spent most Saturdays that fall sitting at tables in campus bookstores watching people pick up my book, look at me, put down my book, and walk away.  This morning figured to be no different, but I dressed in neutral colors anyway, as to not offend fans on either side.

Everyone who walked past my table looked at least as nervous as I was, and I don’t think anyone really considers buying books when they are anxious.  In the end, I signed only nine, a third of those to friends, and afterward I walked from the Ferguson Center to Bryant-Denny Stadium in a cold drizzle.

Kickoff was ninety minutes away, but people were already entering the stadium.  I checked the gate number on my soggy ticket and walked inside.  My seat was in the north end zone, the visitor’s section, and I walked in an upward spiral for what seemed like hours until I finally reached the top.  It was there, in the upper levels of the jet stream, that I realized how woefully underdressed I was.  I left my seat, briefly pondered the ramifications of buying an Alabama sweatshirt from the souvenir booth, then sat for thirty minutes in a bathroom stall to avoid the wind and rain.

Closer to kickoff I ventured back out into the elements and sat down next to my friend Chris Harrison,[1] who appeared to be wearing every article of clothing he owned.  He might actually survive a fall from the upper deck if we were both tossed over, but I decided not to mention this particular fear to him.

Soon the Million Dollar Band was on the field, we sang our national anthem, and then the captains called the coin toss—the coin toss that kept me up most of the night.  Auburn won, and they kicked the ball.  Chris and I both thought this a little strange, considering our Tigers had Cam Newton and the most explosive offense in school history, but we figured the coaches probably knew what they were doing.  It was 7–0, Alabama, before we could sit down.

[1] * The pharmacist, not the host of The Bachelor.  Shut up, my wife makes me watch it.

Chad has partnered with Franklin Graham’s charity Samaritan’s Purse on a Love The Rival-themed giving campaign. The goal: Raise $40,000 to build a women’s and children’s clinic in Petit-Goave, Haiti. Bama fans have donated more than Auburn fans. So go here and love-hate thy rival for a great, great cAUse.