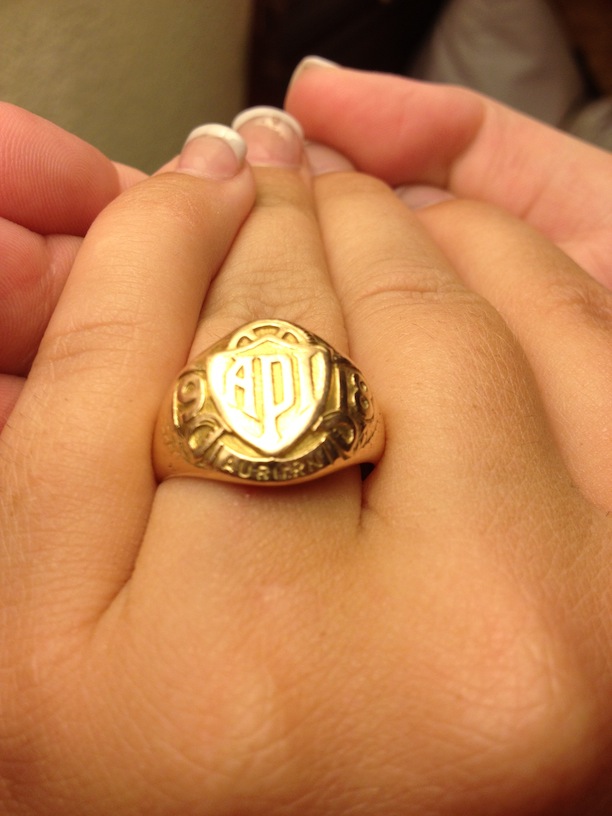 “Here is an API ring passed down from 1918. I think it is such a cool item, and would love to have it showcased. They don’t make rings like this anymore. It is solid gold and heavy as a rock!”

This chunk of gold comes from well before Auburn was Auburn, officially anyway. Even 42 years before API became Auburn, we are reminded that it was always Auburn – and the proof is right there on the ring. This is now the oldest non-photo item we have featured in these posts, and it is a great one. While this family heirloom is much more than just a sports related trinket, it’s a good excuse to look back on the football team of that era.

1918 itself was a pretty bad year for Auburn football, as the team went 2-5 that season. Assuming the ring’s original owner was a senior that year, the prior seasons spent on the Plains came during a rather successful time for football. The team went 6-2-1 in 1917 and 6-2 in both 1916 and 1915. The ring bearer was also only five years removed from the 1913 team that could be, and probably should be, counted as one of Auburn’s national champions. Mike Donahue’s team went 8-0 and shut out all but the last two teams on their schedule, outscoring their opponents 224-13 on the season. So why is 1913 not on the scoreboard next to 1957 and 2010? From Wikipedia:

“The 1913 college football season had no clear-cut champion, with the Official NCAA Division I Football Records Book listing Auburn, Chicago, and Harvard as national champions. Only Harvard and Chicago claim national championships for the 1913 season. The Tigers were retroactively awarded a national title by several computer rating systems, including the College Football Research Center which is a component of the BCS, the current system to determine the national champion. Auburn University does not claim the title, but does acknowledge it in their official media guide.”

I’ve joined in with those poking fun at Bama for claiming titles well after the fact, but I don’t quite understand why Auburn doesn’t list this as an official title. The NCAA, which awards no title for football, lists Auburn right there in black and white (they also have us down for 1983 and 2003, by the way). Harvard is no longer FBS and Chicago dropped football ages ago. We’re the last ones standing. Maybe next year’s 100 year anniversary of the team would be a good time to give them the title they deserved. Or maybe the 2013 team can win another one on the field to make up for it. 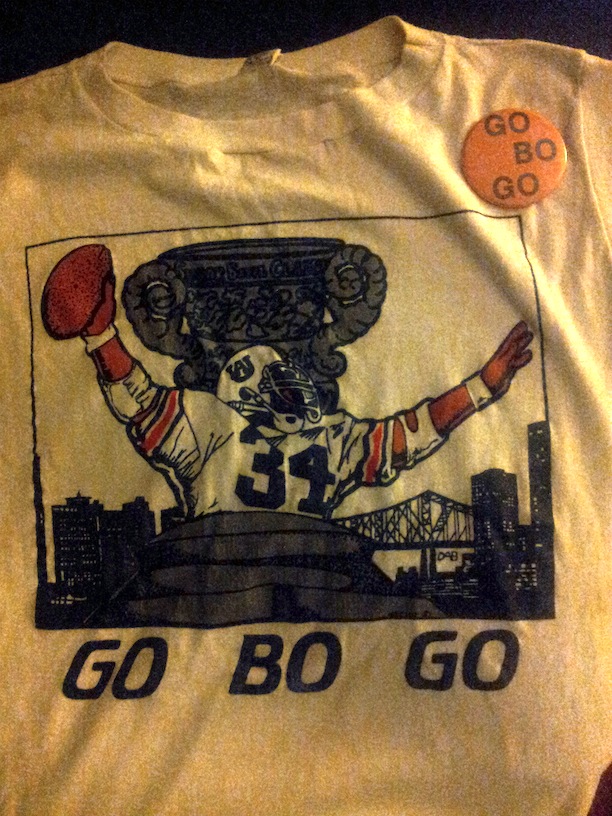 “This was purchased sometime during the 1985 football season from the University Bookstore (and the button is from that same season.)”

While the shirt was purchased in ’85, it looks to be from a year earlier when Bo helped lead the team to the ’84 Sugar Bowl (his only appearance in the game, which is kind of amazing when you think about it) based on the New Orleans skyline including the Super Dome in the background. Of course “Go Bo Go” was always in fashion and never more so than in his Heisman winning season. 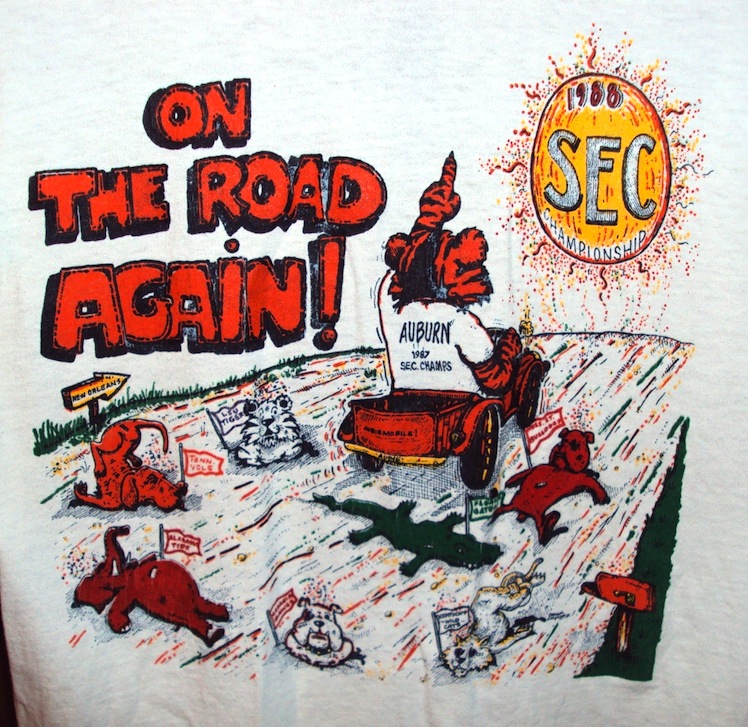 Jeremy comes through again with another classic Auburn tee. Here, Aubie drives his Aubiemobile past the roadkill of his SEC opponents on the way to New Orleans. Auburn would make good on the shirt’s bold projection and earn a berth in the Sugar Bowl after their second of three straight SEC titles, falling to Florida State 13-7. The team’s only regular season loss came at the hands of LSU in the legendary “Earthquake Game.” (Or WAS it…) 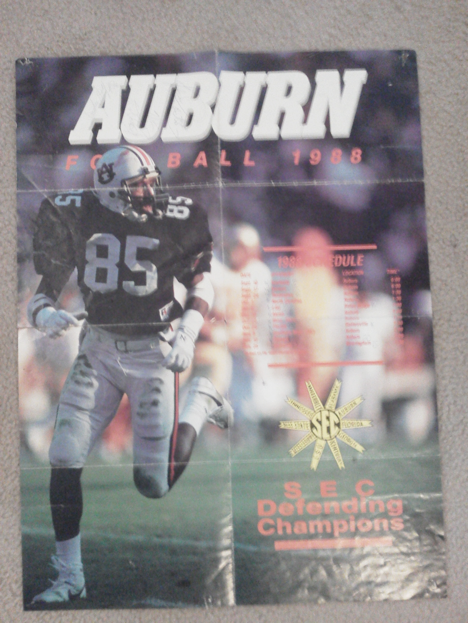 “1988 schedule poster. Got it at A-day that year. That was also my first trip to Jordan-Hare Stadium.”

Here is how the defending SEC Champs’ schedule poster looked in ’88. Lawyer Tillman, two seasons removed from the “Reverse to Victory” that would make him an Auburn legend forever, was a fitting choice to represent the team going into his final campaign on the Plains. Also a fitting memento of someone’s first trip to Jordan-Hare. 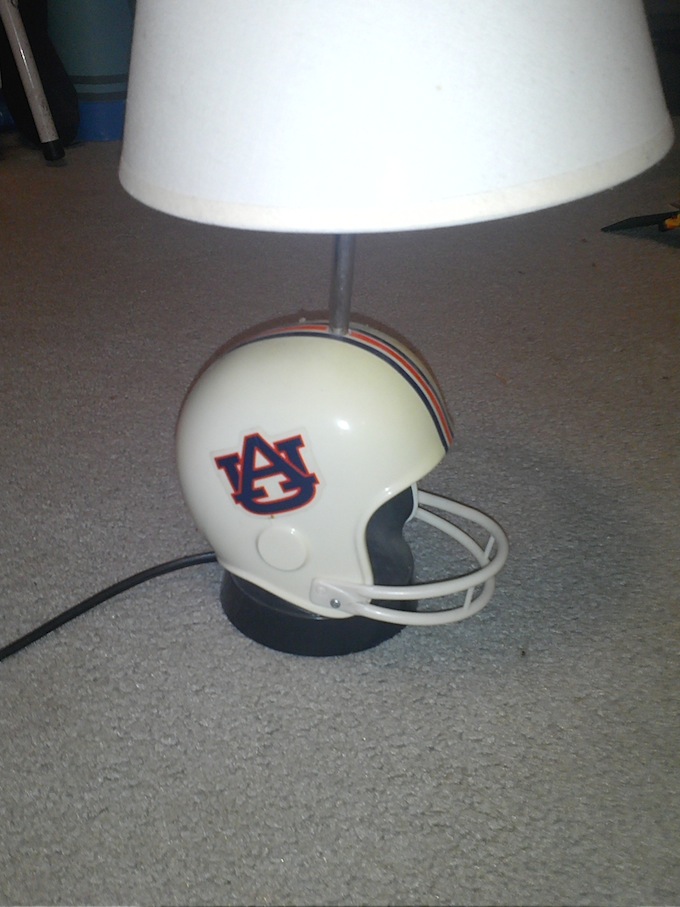 “Here is an old helmet lamp. The bottom of the lamp has the copyright date of 1973, and it has also been in my life since I was small so I would guess it was my dad’s when he was a child. Unfortunately the other side has “Good Job!!” stickers I must have put on when I was small. War Eagle!”

The “Good Job!!” sticker also applies to Clint’s family’s efforts to hold onto this classic for almost 40 years. I imagine there was a run on these following the ’72 Amazins’ success, but I doubt many have made it so long. Hopefully Clint will be able to pass it down to his own kids someday. 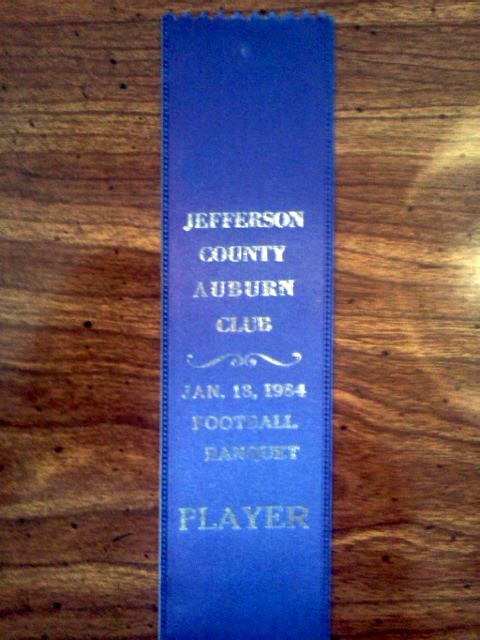 “My grandfather took me to this event in Birmingham in 1984. I don’t remember which player gave me the ribbon, but I think it was Donnie Humphrey because he was my favorite player at the time.”

I don’t know why I love this so much, but I do. I think it’s the image of a big, hulking defensive lineman like Donnie Humphrey receiving a participation ribbon like we used to get at our elementary school field days. It could also be the impersonal “PLAYER” stamped across the bottom.  I don’t know if this only went to the seniors that year, or if all players got one, but can you imagine one of these hanging in Bo Jackson’s trophy room? Good job, good effort.

That’s it for now. Thanks as always to all of our great contributors. To check out past posts, click here. To share your own relics with the Auburn world, email me at [email protected]

Previously: War Eagle Relics is off to the races.