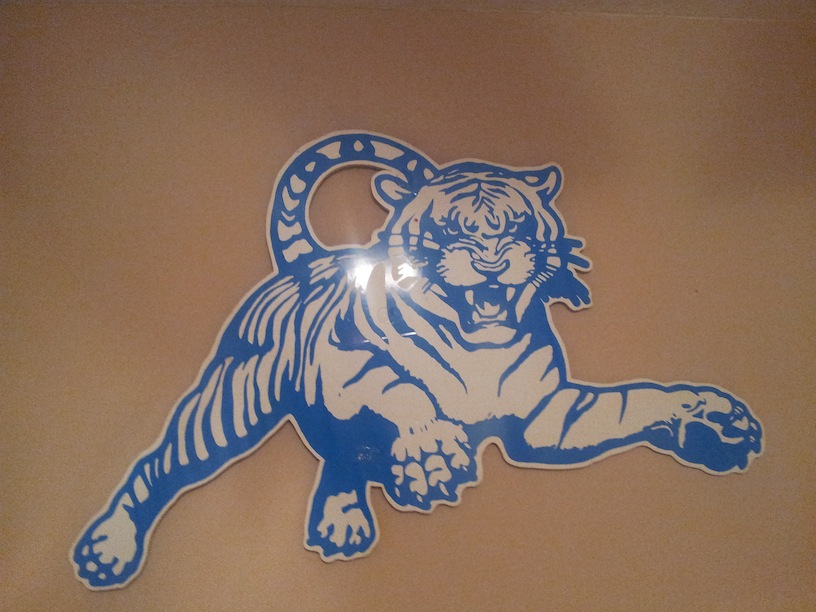 “I’ve got a couple of relics you might be interested in. First of all, I have worked in some capacity in the football press box since the 1990 season when I took over the operation of the “first jumbotron.”  During this time I was responsible for creation of all new custom graphics and animations as well as running the board during games. I always enjoy seeing pictures of “my” scoreboard, such as the “W.I.N” scoreboard recently pictured on your site, as well as “Perfect Attitude” and others.

Attached is a picture of the blue leaping tiger used in Plainsman Park as part of the “Tiger Races.”  I rescued this tiger from the trash pile. There were three tigers of different colors – Auburn high blue, red, and Tennessee orange. The races would take place every so often at AU Baseball games behind the outfield fence from right field to center field. The red tiger never won. I assume the red and orange tigers were “put down” never to be seen again. The blue tiger now hangs over my son’s bed.”

We didn’t quite track down the pouncing tigers from last week’s scoreboard, but this might be the next best thing. Not only is this an excellent addition to our growing collection of items, it is also the first that can kinda sorta be called a baseball relic. We’ve had football, basketball and even hockey specific memorabilia, but never anything baseball related. A tiger that entertained the fans at Plainsman Park between innings qualifies in my book. Now we need something from the swim team. Even better than the tiger, in my opinion, is finding out that last week’s post made it in front of the man who worked on that scoreboard for all those years. Robert, your work was always appreciated. Let us know if you ever need any clever phrases in the future. 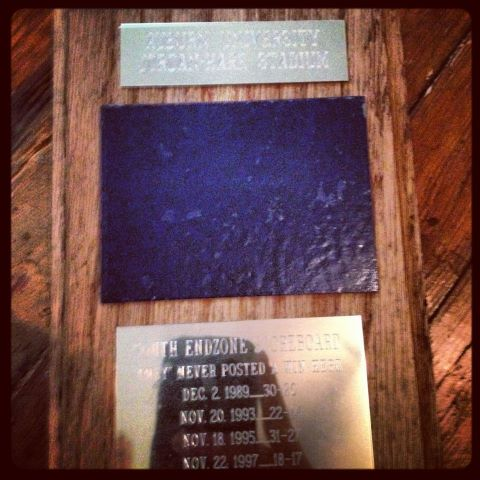 “Original piece of the South End Zone scoreboard at JHS.”

While we’re back on the topic of scoreboards, here is a piece of the old scoreboard we featured in last week’s Relics. The engraving on the bottom plate reads:

“THEY” NEVER POSTED A WIN HERE 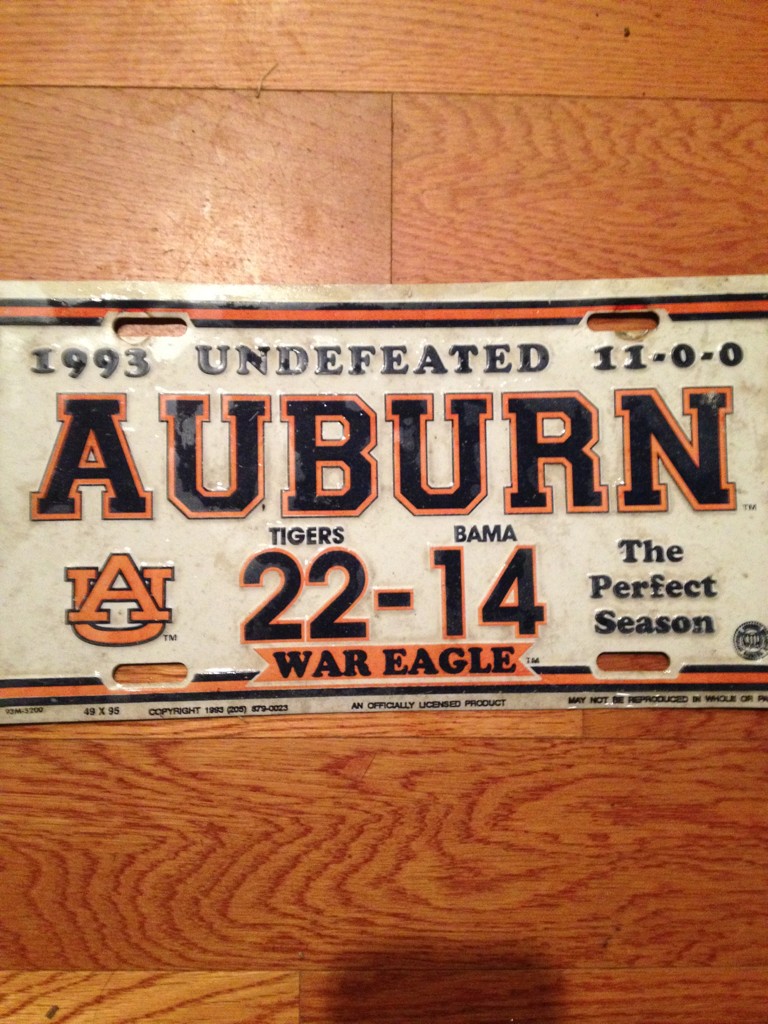 This item ties in both with the one just above it (of the 11 victories, only the 22-14 win over Alabama gets special billing) as well as with Van and John’s post from earlier this week about the ten greatest Auburn teams of the modern era. The 1993 squad that defied all odds to go undefeated (and un-Tide and uncrowned as the old T-shirt once said) comes in at No. 5 on the list. That might seem a bit low for an unbeaten squad, until you read about the teams listed just ahead of them. No word on whether this was the same license plate used in the Oscar-nominated film Winter’s Bone. 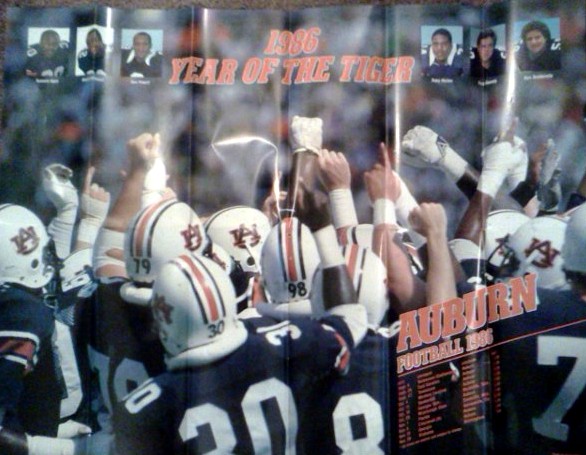 Another team on that list of greatest is the 1986 squad. This is the schedule poster that was released prior to that campaign. As noted, ’86 happened to be “The Year of the Tiger” on the Chinese calendar. Unfortunately, when it came to the SEC championship that year, the tiger in question turned out to be wearing purple and gold. The next year of the tiger came in 1998. We don’t talk about 1998. The most recent, however, was 2010. Now THAT was the Year of the Tiger. 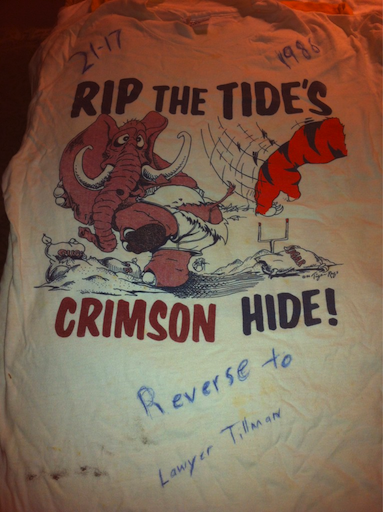 “With my brother’s additions ‘Reverse to Lawyer Tillman’”

Continuing with the idea of one item leading to the next, here is the t-shirt that celebrated the 1986 Iron Bowl win over Alabama to cap the regular season. Love the hand written notations and the Neel-esque “Rip the Tide’s Crimson Hide.” I also really like the ripped bags of sugar, as the loss to Auburn ensured that the Tide would not win the SEC and go on to the Sugar Bowl. 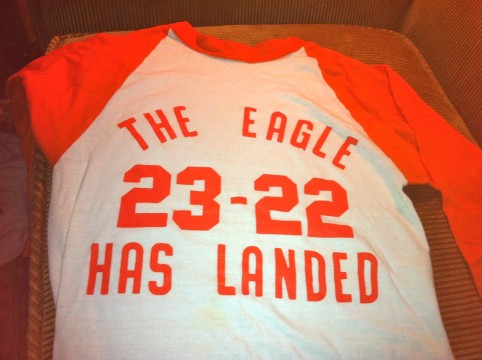 “A t-shirt homage to the 1982 Iron Bowl. “Bo Has Landed” would probably have made more sense, but it’s still a pretty epic t-shirt.”

Here is another classic that Paula tweeted to us (and posted to her blog along with a fantastic Auburn kid’s belt). While it is the perfect keepsake for that historic victory, it would have also made for a great t-shirt to celebrate the first moon landing, had Clifton Williams lived long enough to make it there in ’69. 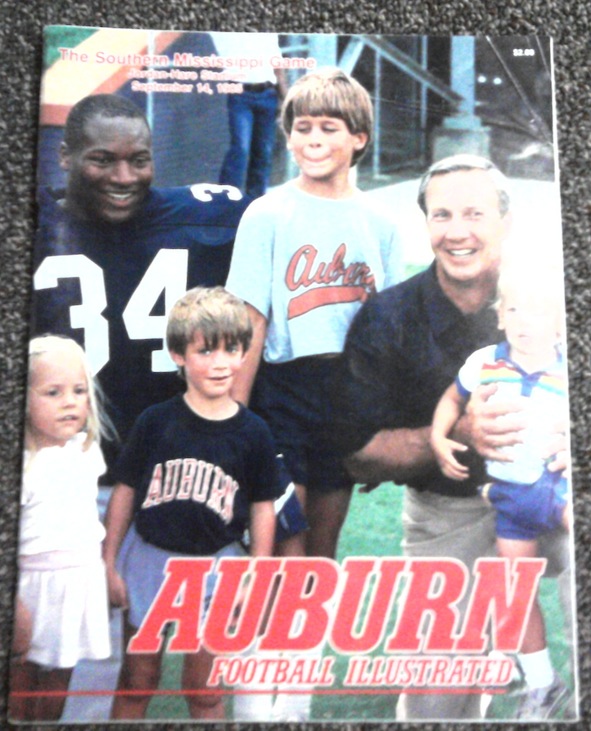 This program from the second game of Bo’s final season features a nice picture of a young, smiling Bo and Pat Dye with some even younger fans. While that’s all well and good, all I see when I look at this program is the face of that kid in the middle. It’s mesmerizing. Auburn won this game 29-18 behind Bo’s 205 yards and 2 touchdowns. I wish I knew what became of the kid.

That’s it for this week. Thanks as always to all of our contributors and for everyone who has allowed us to keep doing this week in and week out. This is our 20th post in the series and I can assure you I never thought we could keep it going that long (and we’ve still got a few more left in us, at least). Couldn’t have done it without you all. To check out past posts, click here. To share your own relics with the Auburn world, email me at [email protected]