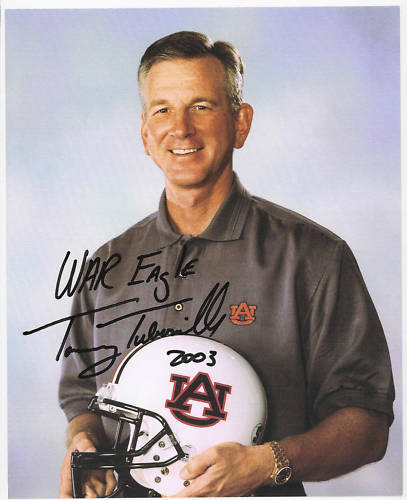 The following article, the final installment in a three-part series–Part 1 is here, Part 2 is here–was extracted from a much larger overall history of the entire Tommy Tuberville Era at Auburn University, and will appear in the upcoming book, Decades of Dominance: Auburn Football in the Modern Era, by your intrepid Wishbone columnists, John and Van.

This time we look at Tuberville’s fifth season on the Plains, when an off-season of immense promise quickly soured for everyone concerned—and very nearly cost the coach his job.  But instead, something quite unusual and unexpected happened…

Based on pre-season expectation, the 2003 season would turn out to be one of the most disappointing in Auburn history.  Remarkably, given the amount of talent on the team and the sense before the season started of just how far this team could go, they would be the only squad from 2000 through 2005 to fail to win even a share of the SEC Western Division.

The first sign of impending disaster came at the end of the 2002 season when, even before the bowl game, OC Bobby Petrino accepted the head coaching job at Louisville, after only one year with the Tigers.  Not wanting to disrupt an offense that had only been in place a few short months, Tuberville opted to stick with the same playbook and simply hand the OC reins over to offensive line coach Hugh Nall, along with newly hired QB coach Steve Ensminger.  This would prove to be a catastrophically bad decision; Nall never liked the Petrino offense, didn’t particularly want to coach it, and simply was not nearly as effective as Petrino at operating it.  He and running backs coach Eddie Gran didn’t seem comfortable with having more than one of the Tigers’ four superstar backs in the game at a time, so at any given moment three of the team’s best offensive players were sitting on the bench.  Bulldozer Brandon Jacobs barely saw the field, and Williams seemed to have the coaches’ favor over Brown for long stretches.  The result was a self-limiting offense that could not move the ball, could not convert first downs, and would not even score a touchdown until September 13.

Disaster struck in the opening game.  Auburn had barely fallen short against Southern Cal in Los Angeles the previous year, but the Tigers had basically their entire team back and were facing the Trojans at home this time.  Before the game, there was some talk of “USC can’t play in heat and humidity like this.”  At Tuberville’s instructions, the fans mostly wore orange.  The stage was set for what should have been a monumental victory.

There was one other factor at work that could have motivated the Tigers to play well.  During the off-season, the team’s longtime play-by-play announcer, Jim Fyffe, had passed away—a tragedy that affected many Auburn fans deeply.  In an attempt to honor Fyffe, the Auburn cheerleaders during pre-game festivities instructed the crowd that after Auburn scored its first touchdown, one side of the stadium would yell “Touchdown” and the other side would yell “Auburn,” in a re-creation of Fyffe’s signature call.  Some immediately considered this a jinx, but much more would be involved in the unfortunate nature of how this game played out than mere bad luck.

As it turned out, all the orange in the stands didn’t help, the “home climate advantage” proved to be a myth, and Jim Fyffe would sadly never be honored by that particular cheer.  Without Petrino calling the plays, the offense could do nothing, and the Tigers fell, 23-0, to the eventual national co-champions.  There would be no more talk of special new touchdown celebrations—though the “all-orange” concept would survive into the regime that followed.

The week after the stunning shutout by USC, Auburn traveled to Grant Field to face Georgia Tech for the first time in nearly two decades, and managed only a field goal in a 17-3 loss.  Just as had happened in 1984, a potential national championship season had seen the Tigers start 0-2.

Against Vanderbilt they finally scored a touchdown—in the third game of the season, a potential national championship season!—and won, but it was too little, too late.  They managed tough wins over Tennessee, Arkansas on the road, and Miss State before falling in a big way to LSU in Baton Rouge, 31-7.  A heartbreaking loss to Ole Miss at home (when star receiver Ben Obomanu dropped the potential game-winning pass in the Rebels’ end zone) and then a crushing defeat on the road at Georgia (the first Auburn game Van ever left at halftime, out of sheer disgust) meant that this supposed squad of limitless potential had become, astonishingly, a 6-5 team—the first of Tuberville’s teams since his opening campaign in 1999 to fail to win even a share of the Western title—with only the Iron Bowl left to play.

That being the case, we later discovered, Auburn President William Walker and Athletics Director David Housel boarded a private plane and flew to Louisville to meet with Bobby Petrino, to discuss the possibility of the former Auburn OC taking over as the Tigers’ head coach the following year.

Tuberville knew some of what was happening.  He felt he was essentially coaching for his job against Alabama on November 22.

Coach Nall was given free rein for this game to run the offense the way he wanted to, rather than trying to copy Petrino’s approach.  This plan worked to a degree, and Auburn took the lead on the very first play from scrimmage when Cadillac Williams “went crazy” and dashed eighty yards for the opening score.  Later in the first quarter, a catch and long run by Obomanu (plus 2-point conversion by Campbell) and a John Vaughn field goal put the Tigers ahead by the unusual score of 18-2.

The Tigers held on for a 28-23 victory, amassing an impressive 519 yards of total offense in the process.  It was Auburn’s first win over Alabama in Jordan-Hare since 1997.  Nonetheless, an emotional Tuberville afterward was uncertain if he had just coached his final Auburn game.  What he (and Walker and Housel) hadn’t counted on was a certain flight becoming public, after someone spotted the plane on the runway and jotted down its tail numbers.

As details of Walker’s and Housel’s trip to Louisville emerged, the Auburn Family chose to close ranks and rally behind Tuberville and to largely condemn the president and AD for the surreptitious nature of their visit with Petrino.  Despite the disappointment of the 2003 season, Tigers supporters reminded themselves that Tuberville had beaten Alabama three out of five times, had won a share of the Western Division of the conference three times, and had gotten the Tigers to Atlanta in his second season.  Many also saw the main issue of the 2003 squad—lack of real focus on offense—as a correctable problem, not requiring the replacement of the head coach.

Walker and Housel backed down and Tuberville reaffirmed his commitment to the Auburn program.

On Friday, January 16, President William Walker resigned under pressure.  He was replaced by Ed Richardson as interim president.  Many speculated that this would be “it” for Housel, as well, as Walker had steadfastly supported Housel staying on in his job.

Richardson quickly placed well-respected Senior Associate Athletics Director Hal Baird in charge of the day-to-day operation of the Athletics Department, changing his title to Athletics Assistant to the President. (Baird had retired as Auburn’s baseball coach in 2000.)

On February 13, after interviewing multiple candidates, Tuberville hired Al Borges away from the University of Indiana to be the new offensive coordinator.  Borges was seen by many as a surprise choice (and he and Tuberville were quickly ridiculed by Paul Finebaum on his radio show when the hire was announced), but Borges had led a prolific UCLA offense a couple of years earlier, and impressed Tuberville with his ideas about making adjustments at halftime.  (Other candidates, including those who advocated a “spread” offensive attack, Tuberville later reported, had mostly insisted a team should “keep on doing what you do,” even when trailing at the half, while Borges had offered innovative and creative suggestions.)

A month later, with the essentials of his job now in Baird’s hands, Housel announced he would retire in January of 2005.  During that final year of Housel’s tenure, Baird (who repeatedly asserted that he had no interest in a permanent AD position at Auburn) served as point man on the replacing of the men’s head basketball coach, women’s head basketball coach, head baseball coach, and ultimately the search for a new AD that would take the place of both himself and Housel.  This process concluded on December 22 with the hiring of Jay Jacobs as the new Athletics Director.

Thus the disastrous season of 2003 was in the rear view mirror at last, and Auburn was making wholesale changes throughout the following year that would leave the Athletics Department looking very different.  One face that remained the same, however, was that of the head football coach.  Tommy Tuberville remained, as did his stalwart defensive coordinator, Gene Chizik, now entering his third year on the Plains.  As they welcomed Al Borges into the fold and prepared for the upcoming season, the Auburn Family hoped the bad times were over and maybe a little better future lay ahead.

No one, however, could have dreamed just how much better the 2004 season would be, and just how close it would come to confirming Tuberville’s bold prediction:  “We will win a national championship at Auburn University.”

The 2004 team would certainly do everything in their power to make that statement a reality.

Read the Wishbone’s entire history of the Tommy Tuberville Era in the upcoming Decades of Dominance: Auburn Football in the Modern Era.