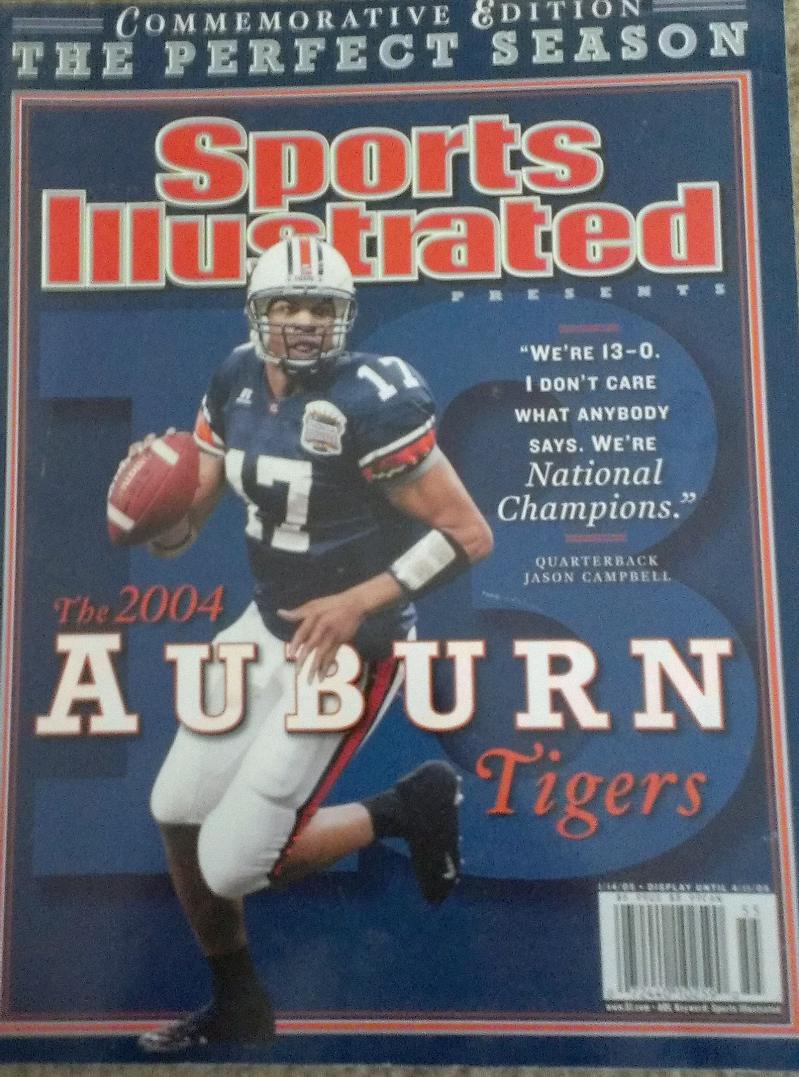 This was sent in by our anonymous friend, but I have a copy as well. It was the first time since I had started at school that Auburn made the cover of the magazine I grew up reading, even if it wasn’t the regular national issue on newsstands. I’ve always admired the defiance in Jason Campbell’s quote declaring Auburn the National Champions, even if I could never truly bring myself to believe it. Auburn was not the National Champion in 2004, unfortunately, though it was no fault of their own. They did everything they could do. It wasn’t USC or Oklahoma’s fault either. I won’t even blame the voters (most of them). It was simply a result of the system in place at the time, and it’s one reason I rejoiced in its demise last week. While the 13-0 record was spotless, it’s hard for me to call 2004 the “perfect” season. As great as it was to watch that team come together to exercise the demons of 2003, the sense of what could have been if they’d only had a shot at the title was too strong to overcome. I still remember walking out of the Georgia Dome following the SEC Championship Game victory over a tough Tennessee squad and, instead of jubilance after my school’s first conference title in years, feeling like we didn’t do enough. I was happy, sure, but there was something missing. I wandered by the ESPN Gameday set in time to hear Lee Corso loudly proclaim that the Auburn team he just saw was not the second best team in the country to a smattering of boos from the Auburn faithful. Not coincidentally, 2004 was also the year I started to lose all faith in the “objective” coverage provided by ESPN. Maybe I had been oblivious to it before since my team wasn’t in the middle of a title hunt, but it was hard not to notice the lack of respect afforded Tuberville’s team all year. The most blatant example came after Auburn applied a healthy beatdown to a very good Georgia team. After the game, Herbstreit said on the air that Auburn had finally shown him enough to move them ahead of Oklahoma in his poll to No. 2. That was a Saturday night. By the following Thursday night, during a game that he called from the booth, he had moved Auburn back to No.3 despite the fact that neither team had played a game since his last adjustment.  Maybe he was caught up in the moment after a big Auburn win and later changed his mind, but I couldn’t help but feel like he had received a stern talking to by the higher ups at ESPN who had their marquee matchup of traditional heavyweights all lined up. As the years have gone by, I’ve come to appreciate more and more what that season meant to Auburn and remember it more for the good than for the disappointment. The title in 2010 did take away some of the sting, but it will never fully go away. At least it will never happen again.*

*As an Auburn fan, I’ll still always fear us getting the shaft no matter what system is in place at the time. It’s just too ingrained.  That said, it would be pretty hard to keep an undefeated Auburn team out of a four team playoff, so this feels like a relatively safe statement. 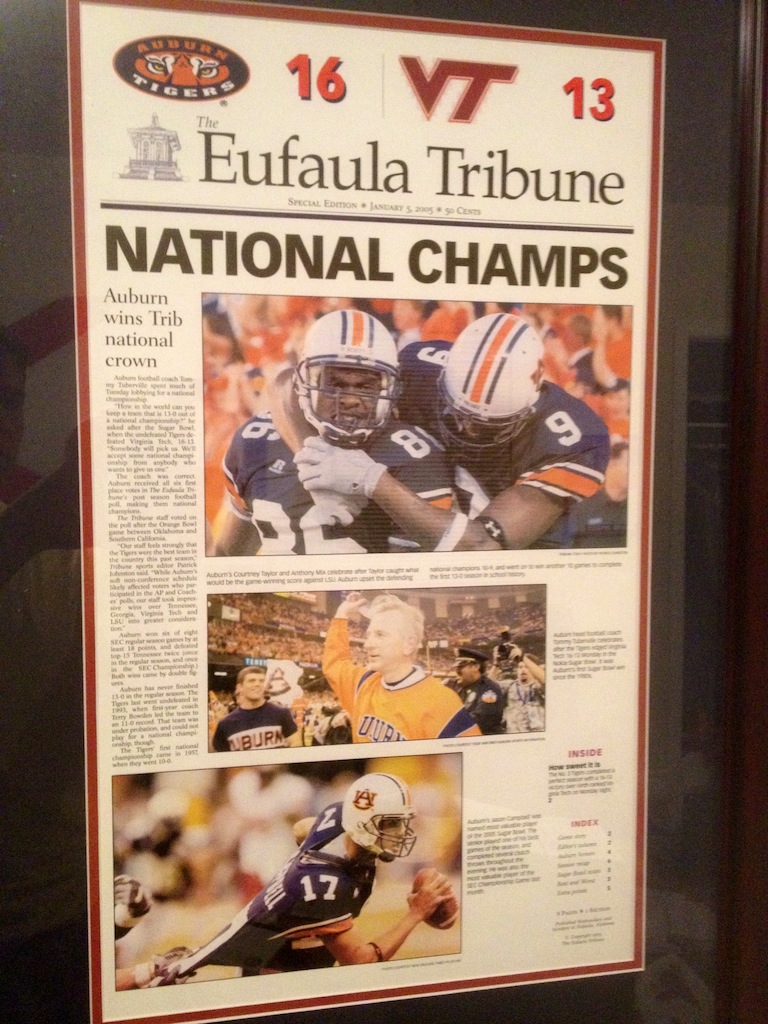 “The announcement this week of a college football playoff reminds everyone of the team that set it all in motion- the 2004 Auburn Tigers. And while they weren’t given the chance to play for the championship in ’04, they were #1 in our hearts- and in Eufaula’s.  The January 5, 2005, issue of The Tribune (pronounced TRIB-une, because I know how Auburn people appreciate correct pronunciations) unanimously declared Auburn the national champs- Auburn swept all 6 (!) first place votes in the poll.”

Forget what I just said about not claiming the title. A unanimous vote from the Eufaula Tribune is legitimate enough for me. Order the banners and update the sign over the scoreboard. Trib National Champs!

I’ve been holding onto this one for a few weeks just waiting for the right time to use it in a post. With the focus on the 2004 season, there is no better time. Tommy Tuberville did an excellent job building and coaching that team and I will always hold him in the highest regard because of both the way his team played week in and week out and the class he displayed throughout the end of the season when it became clearer and clearer his team would be left out. He made the case for his team without ever coming across as a victim of the system or attacking teams ahead of Auburn in the polls. I’m not sure that I would have been able to identify this bobblehead as Tommy Tuberville without the AU logo and name printed along the bottom, but it makes a great collector’s item regardless. Not sure what year this was made and there are none available on eBay or Amazon to help with an answer.

NOTE: There will be no jokes here about how this bobblehead just enlarged Tuberville’s head to fit his ears, no sir. As a man with ample auricles myself, I will not cast such stones. 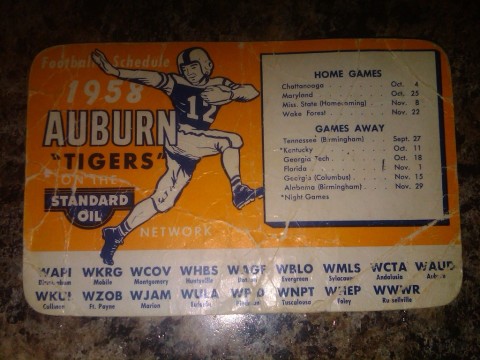 – 1958 pocket schedule that belonged to my grandaddy. He kept it in his wallet until he passed away in 1999.

When I talked about Auburn’s lack of fanfare for the 1957 title a couple posts ago, this is what I was talking about. Here you have the 1958 football pocket schedule with nary a mention that the Tigers are the DEFENDING NATIONAL CHAMPIONS. Maybe it was different back in the day and it was seen as immodest to assert such things, but it seems to be a glaring omission when viewed through a modern lens. 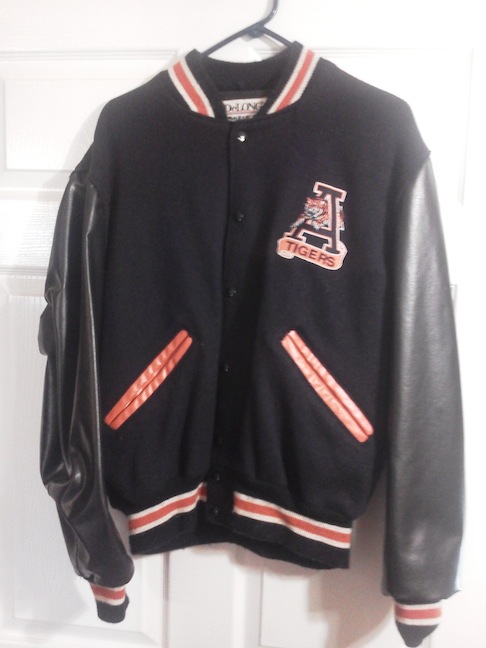 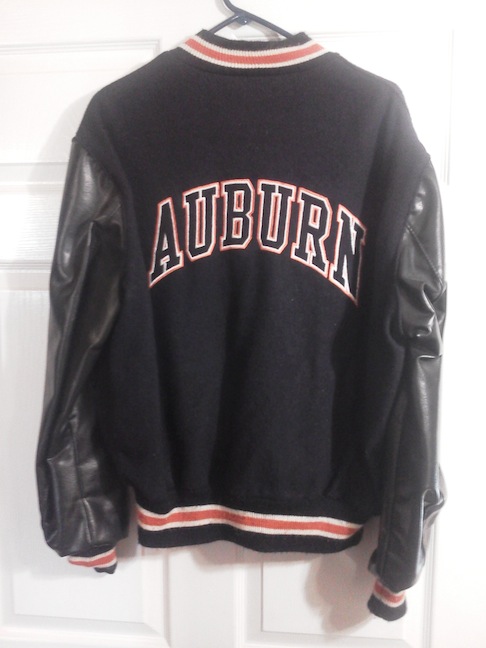 “I was at my mom’s house today and found this jacket I wore as a kid. I completely forgot about it, but immediately thought about sharing it.”

I’m a big, big fan of this jacket. I like the old school lettermen jacket style and, of course, the Tiger through the A alternate logo. The AUBURN across the back just seals the deal. I’m now holding out hope for a classic ‘80s Auburn Starter jacket. 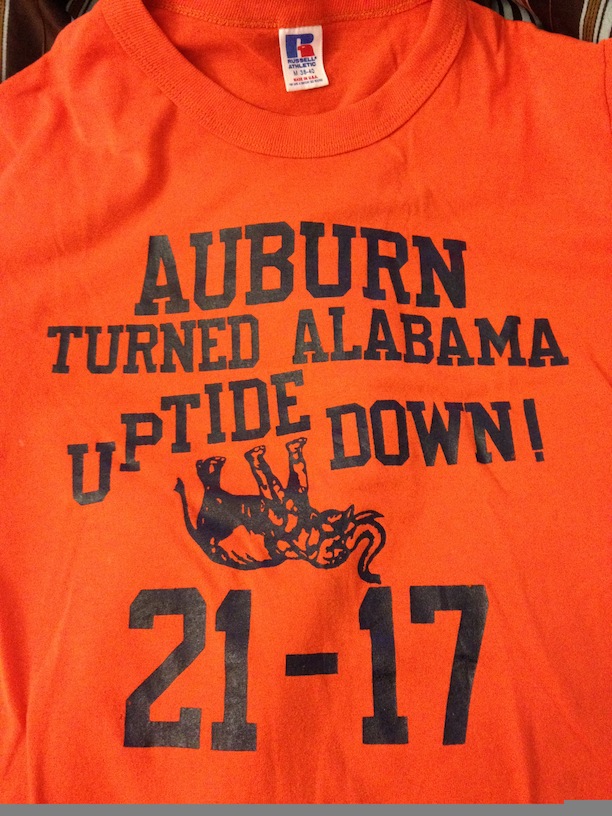 “This is an old shirt, but it’s relatively new to me. About a year ago TWER posted a link to an eBay listing with the shirt and I had to have it since the ’86 Iron Bowl was the first one I was alive for. I didn’t get to go (being 3 months old means you’re not invited, apparently), but I like to think that my presence just a few miles away in Birmingham helped Lawyer Tillman get over the goal line on his reverse to victory to start our four-year win streak over the Tide.”

Long before there was a War Eagle Relics, there was a TWER post that would provide the inspiration for Charles to buy a T-shirt that would later become a relic. That is the circle of life.

That will do it for this week’s edition. For editions past, go here. Thanks as always to our contributors. If you have something you’d like to share, email it to me at [email protected] or tweet me @FearlessandTrue.