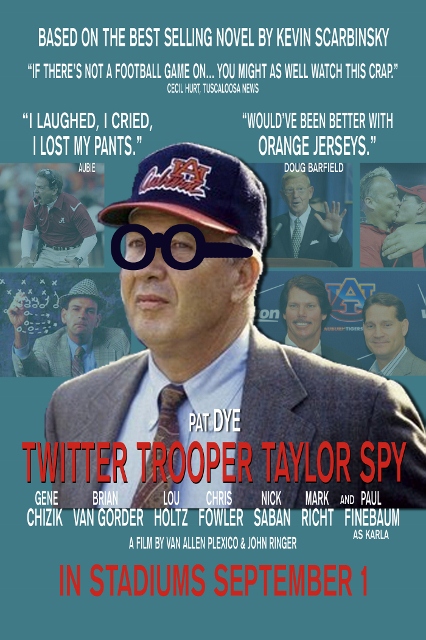 The haggard assistant coach collapsed on the floor, bleeding from multiple gunshot wounds to the abdomen that would have killed a lesser coach but not an SEC assistant because this is the SEC by God.

Gene Chizik leapt to his feet and ran around his trophy-laden desk, which was trophy laden because this is the SEC by God.

“Trooper!  Trooper—speak to me!  You say one of our recruits was injured playing Whack-a-Mole??”

Trooper paused in his desperate efforts to stanch the bleeding with a towel, reached up with bloody hands, and—just as Defensive Coordinator Brian VanGorder ran into the room—grasped Chizik by the collar.  “No, you fool—a mole!  One of our recruits is a mo—URK!”

Chizik and VanGorder exchanged glances heavy with portent that this would be a really dramatic yet somehow ephemeral story.

“But—did you hear what he said?” Chizik demanded.  “A mole!  We have a mole in our midst!”  He rounded his desk and snatched up the red hotline phone.  “This is the Chiz,” he announced.  “We have a situation.  Convene the War Council!”

Chizik took the dead silence coming from the other end to mean Aubie would comply with his orders, as always.

“To root out the mole in our Recruiting Circus,” Chizik told the assembled crowd of assistant coaches and mascots, “I’ve decided to bring in a special investigator.  Someone who can operate outside the margins and look into everything in a fair and impartial way.  Someone who can infiltrate the deepest circles of recruiting and never be noticed.”

The coaches looked up in shock and awe.

Patrick Fain Dye nodded to each of the men and wildlife, and then took a pair of thick, round eyeglasses from his pocket and put them on.  Then he handed out bags of Golden Flake potato chips.

“Let us begin,” he intoned in his rural Georgia accent.  “Coach Chizik has filled me in on the details.  Sounds like you fellas have a mole in the Circus.”

“Sleeper?”  Dye looked over at the running backs coach, eyes wide.  “Well, now—Bo used to nap before all the big games, and it didn’t really interfere with—”

“Oh.  Heh.  Right.”  Dye removed his cap and scratched his head.  “Okay, well—I’ll root this mole out for you.”  He gazed at each of the coaches in turn.  “I know you men can handle the rest.”

“You got that right, Coach,” VanGorder replied, slipping on a pair of brass knuckles.  His mustache was already wearing a pair.

“Tweeter,” he said, and pointed to the first one.  Then, “Trooper.  Sniper.  Troll.”  He looked up at the coaches.  “Three of these young men are simply confused—genuinely confused—by the chaos that is the college football recruiting process—or else keeping their options open, talking to different schools, trying to make the best decision for themselves and their families.  Or waiting to hear if Saban will offer their high school coaches a job.”  He paused, then, “But one of them is not legit—he’s only pretending to be committed to the University of Auburn so he can spy on our activities, use up a scholarship spot, block other recruits—and then switch his commitment at the last minute to one of our rivals.”

Chizik absorbed this shocking information, then leaned in close to the lamp on his desk.  “What do you think about that, Nick?” he asked.

“Think of the negative publicity,” Coach Thigpen uttered in astonishment.

“Exactly,” Dye declared.  “And that’s why we’re gonna nip this in the bud.  Because,” he added, “you read any book on ‘crootin, and you’ll find it comes down heavy in favor of bud-nippin’.”

“How will you find the mole?” Coach Luper asked.

Dye looked around.  “Wait a minute.  Are we secure here?  Nobody’s listening in?”

“So,” Luper said, bringing them back to the topic at hand, “as to your methodology?”

Dye pointed to the little football player figures as he replied.

“It takes analysis.  I’ll have to dig deeply.  Study patterns of behavior.  Did this one linger too long at the ice cream toppings bar with that recruit who’s committed to Florida?  Did this one Tweet too much about how awesome Georgia’s locker room was?  Did this one eat grass with Les Miles?”  Dye shrugged.  “It takes work, men.  Hard work.”

Chizik nodded and then clasped Dye firmly by the hand.  “I know you’re the right man for the job, Coach.  The Auburn Family thanks you.  We’re so thankful that you’re All In.”

After two full days of sipping bourbon, munching on Golden Flakes, and watching American Idol reruns, Pat Dye at last rose from his recliner, showered, put on his blue blazer and striped tie, white tennis shoes, and baseball cap, and drove to the nearby Waffle House.  He nodded to the other customers as he entered and then slid into the designated booth.

After a few minutes of waiting, another figure slid in across from him.  The other patrons at the Waffle House looked over at them briefly but, this being Waffle House at 2 a.m., soon shrugged and got back to their meals.

“Oh, I have it, alright,” the shadowy figure replied.  “But I can give you more than that.”

The other man nodded.  Then he adjusted the paper bag that covered his head.  “I can give you the ringleader,” he said.  “I can tell you who Karla is.”

“Karla!” Dye exclaimed.  “The puppet master!  The seemingly-mythical guy who runs all the mole operations for the Evil Empire!”  There was a predatory gleam in the coach’s eye that hadn’t been present since the Bill Curry era at Alabama.  “He really exists?  You’ll give me his name, too?”

“Absolutely.  If the price is right.”

“Wait,” the bagman said, holding out a hand.  “First things first.  You have it with you?”

Dye frowned, then reached under the table and pulled out a sack.  Reluctantly he handed it over.

The bagman accepted the sack and stashed it away.  “This will come in handy,” he said with what might have been a grin, underneath his own bag.

“The names,” Dye growled, between coughs.  “Give me the names!”

The bagman took a slip of paper from his pocket and handed it to Dye.  “That’s the mole,” he said.

Dye glanced at it, shrugged, and stuffed it in his pocket.  “What about Karla?” he asked.

The bagman nodded and handed him another slip.  “I think you’re gonna like it.”

Dye read the name written on the paper.  He brightened.  His cough fell silent.

“You’ll give that to Chizik, then?” the bagman asked.

“I knew it, Finebaum,” the old coach growled menacingly.  “I knew you were Karla.  You’ve been manipulating things—playing the puppet master behind the scenes—all along!”

“I had to do it—don’t you understand?” Finebaum clasped his hands together plaintively.  “I thought I could control Saban, but he’s just too powerful!  He made me do things—terrible things!  And then the SOS turned on me!  It was a coup!”

“The game is up, Karlabaum.”

“You think I-Man’s coming to your rescue, Finebaum?” Dye asked, scoffing.  “I doubt that!”

With a savage scream, Finebaum hurled himself at Dye.

Finebaum fell to the floor.

Dye stood over his bloody body, shaking his head sadly.

The door burst open and Tammy ran in.  She looked down at the mess that was Finebaum, then at Dye, then up at the heavens.  She raised both fists and screamed in futility.

Coaches Dye and Chizik sat in a bass boat on Lake Martin.  Dye handed a slip of paper to Chizik.

“This is the mole?” Chizik asked, looking at the name on the paper in astonishment.

“You’ll be wantin’ to memorize that and then destroy it,” he rumbled.  “And I was never here.”

Chizik nodded, read the name over one more time, then put the paper in his mouth and chewed it up.

“So—how did you do it, Coach?” Chizik asked after he’d swallowed.  “How did you find the mole?”

Dye eyed him levelly.  He coughed a few times, then shrugged.  “All I knew how to do was go back to work.”

Chizik frowned and looked around.  “It’s just you and me here in the boat, Coach.”

Chizik pursed his lips, nodded, and picked up the paddle.  With deft strokes he turned the boat around and headed back to shore.  Along the way they saw Nick Saban approaching in his own dingy, the body of Paul Finebaum in the front.

“Burial at sea,” Saban offered by way of explanation as the two boats passed one another.

Chizik snapped a quick salute by way of reply and paddled faster.  Behind them he heard a splash.

“Looks like you’ll end up with a pretty decent ‘crootin class,” Dye rumbled as they pulled alongside the dock.

As Dye stood and started to climb out of the boat, Chizik looked up at him and his eyes widened.

“Umm…. Coach—what happened to your pants?”

Dye looked down, realized for the first time that he was clad only in a sport coat, tie, cap—and boxer shorts—and blinked in surprise.

“Well.  Danged if I know,” he muttered.  “That seems to happen a lot.”  He shrugged and reached back toward Chizik.  “Now hand me them Golden Flakes.”