From what I’ve heard (and I have so heard), the selection process for the Loveliest of the Plains was wrought with sorority politics—time for a Phi Mu, time for a Tri-Delt, didn’t we do a KD last week, the Chi-O’s will be ticked. And I know for a fact that the resulting headache factored into the feature’s demise.

But sometimes, a Plainsman photographer would be struck by the looks of a random girl in the student union, and simply take action. Like that time with Jean Ward. 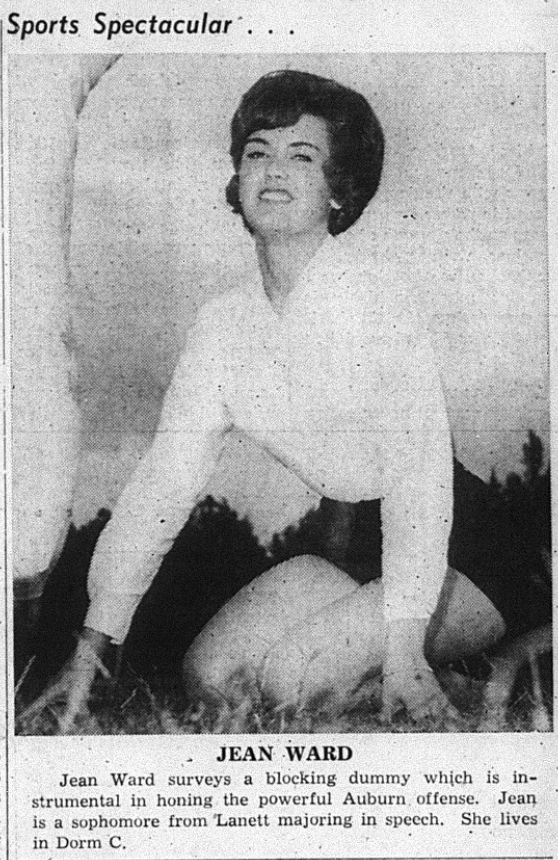 Ward (now Jean Mann) filled the Sports Spectacular slot, a Loveliest of the Plains supplement that made the Plainsman twice as lovely for several years in the 1960s, in the Sept. 30, 1964 issue of The Plainsman. She wrote last week asking if her photo was included in the TWERchives. (Is the Pope Catholic?) I sent it to her. She hadn’t seen it in years. It made her day. It made my day. She returned the favor with her recollections of the Loveliest experience.

“I remember being in the student union cafeteria having lunch with friends one day when someone approached me, introduced himself as being affiliated with The Plainsman, and asked would I consider being photographed as The Loveliest of the Village on the Plains for an issue of the newspaper,” she writes. “I was stunned and of course flattered. I remember being told what to wear, then being escorted by someone from the newspaper to the spot a photographer had chosen a few days later where I was told what pose to assume.”

As you might imagine, Sports Spectacular photo shoots were almost always, you know, sports-themed. They had Jean kneel next to a blocking dummy.

“The picture was taken, then in the very next issue, there I was! I was recognized by a few in classes and on the sidewalk after that. It was surreal being a semi-celebrity until the next issue came out with a new ‘Loveliest.’ It was a fun experience and I’ll treasure the memory always.”

As will we, Jean.