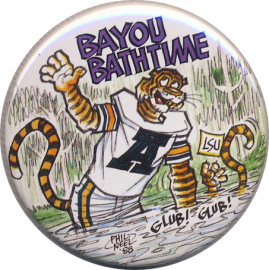 I interviewed Phil Neel in 2006 when The Aubie Story came out. I drove to his house. I shook the hand behind the paw. His wife got me a Coke. And we all walked down to the basement where Aubie was born—or I don’t know, maybe they had moved and maybe it wasn’t that exact house, but there were notebooks and paper and drawing tables and pens all around and you get the idea.

The story was for the Alabama Baptist newspaper—he’s a hardcore at Deerfoot Baptist Church in Trussville. Naturally, my last question was: “Is Aubie a Christian?”

Here’s his answer, which references the promotional pinback buttons featuring Aubie illustrations that I think Alabama Hardees stores were combo-mealing back in 1988, and which will of course be included (in higher resolution) in our Phil Neel repository (coming soon):

I never got to that (Aubie’s religion), although one time I was drawing a thing. There’s a button when we were playing LSU and they all had a little slogan about them. And I was going to use ‘Bayou Baptism,’ cause the Auburn Tiger had the LSU Tiger and they were down in the bayou, in the swamp, and you could see he was holding his hand up like a preacher does, like ‘in the name of the Father’, etc. He didn’t say that, but he had his hand up and it said ‘Bayou Baptism.’ We got that sent to the place that was going to make the buttons and they wouldn’t do them. The guy, the owner, said ‘I’m a born again Christian and we won’ t do this.’ And I said, ‘well I’m a born-again Christian, too, and I’m not belittling baptism or anything. It’s just, people are always talking about Baptism—baptism by fire and that kinda stuff.’ But he wouldn’t budge a bit so I just changed it to ‘Bayou Bath Time’ or some kind of deal. I just changed the name, but I still had him holding his finger up like this…

So maybe that’s why God smote our incredible regular season with an earthquake that night. (OR DID HE?)