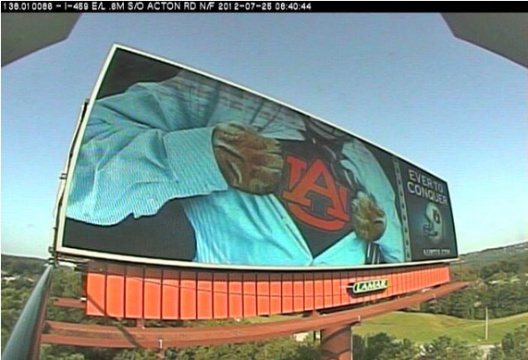 Auburn has unveiled a new billboard campaign. Several signs of what appears to be a ManTiger Super Camming open a button down shirt to reveal an AU logo next to the slogan “Ever to Conquer” are going up across the state and in Georgia.

“There are approximately 15 per month that will run throughout the fall,” says Cassie Arner, Auburn’s assistant athletic director for public relations. “The locations will change during the campaign, but will cover the major markets in Atlanta, Birmingham, Montgomery and other parts of Alabama and Georgia.”

Auburn Football’s Twitter account today released a photo of one of the new billboards. This one appears to be on Acton Road in Birmingham.

In June 2011, Auburn launched a similar campaign in Birmingham with billboards featuring the Coaches Trophy with the slogan “Your Future Is Clear.”