I was never much for Burger King growing up (I mean, Kid Vid was cool) and for that I have paid dearly—via PayPal. Because the Phil Neel-illustrated buttons that were available at Burger Kings around Auburn and across the state in 1987 and 1988 were, at least at one time, fetching a pretty penny on eBay. And for good reason—they were awesome, of course, but they also represented cartoon Aubie’s first major appearance beyond Neel’s repeated Aubie vs. Opponent Power Animal ticket art since he disappeared from the cover of Auburn Football Illustrated in 1976 (he returned twice—for Bams’s first visit to Jordan-Hare in 1989 and Auburn’s last visit to Legion Field as the Iron Bowl home team in 1991).

But you can’t call them Aubie buttons, because like on a couple of Neel’s program covers, Aubie was a no-show. In his stead? An eagle, mascot dogma be damned!

Here is the complete set of Neel’s Auburn buttons from 1988 (courtesy David Caraway—good God, what a schedule) plus a few—if you have the rest, we have the space—from 1987. 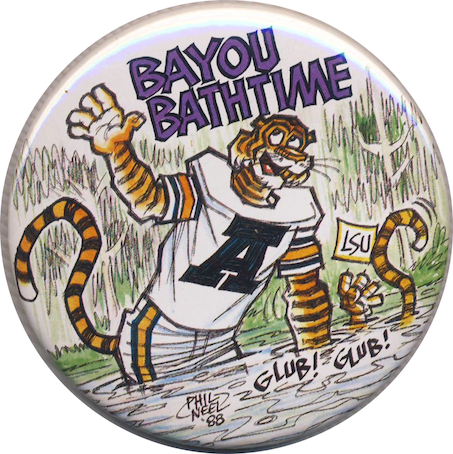 You’ll recall that the button for the LSU game originally read “Bayou Baptism.” Someone had a problem with it.