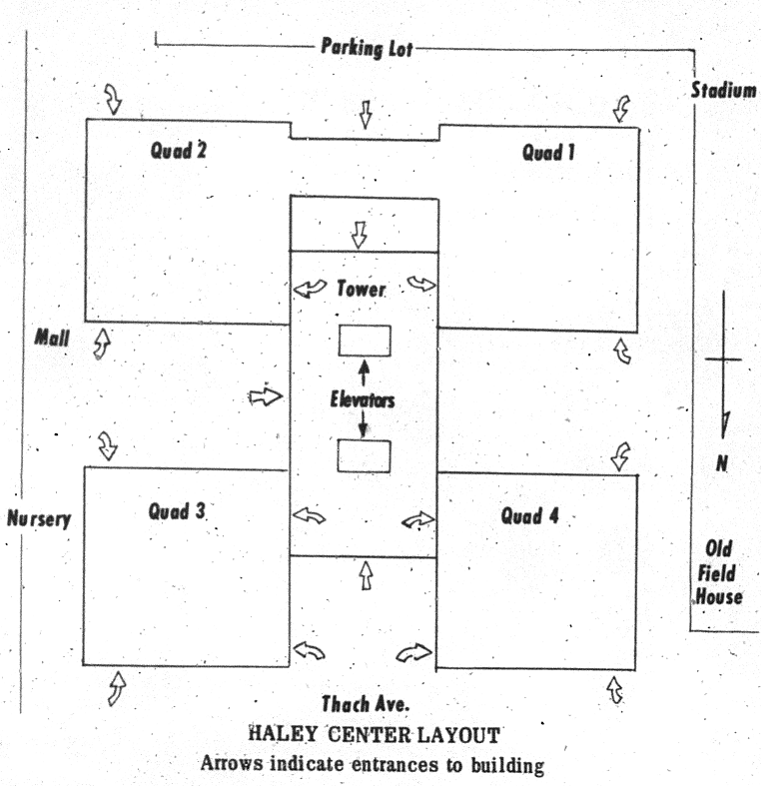 Three weeks before Haley Center opened for business in June 1969, The Plainsman printed the layout of the now legendary Auburn labyrinth along with instructions related to zones and quadrants and counterclockwise zeros and towers that reads like a Masonic clue from National Treasure.

(Evidently the powers that were thought that every red-blooded Auburn male instinctively knew in which direction the women’s dorms were like migrating birds, even while wandering through identical, windowless hallways.)

Room numbers consist of four digits. The first number is the floor on which the room is located. The second digit indicates in which quadrant the room can be found. The third and fourth numbers are the room number for that floor quadrant.

The quadrants are numbered in counterclockwise order facing the building from Thach Ave. Quadrant one is located next to Cliff Hare Stadium and quadrant two is facing the women’s dorms. Quadrants three and four are along Thach Ave. with three being beside the Nursery School and four adjacent to the old field house.

Thankfully, they do at least acknowledge the SMH of it all.

Owing to the fact that its four quadrants and one tower essentially made Haley “like five separate buildings,” Ray K. Parker, Haley Center Construction Inspector, predicted that “locating the desired room could become a source of confusion until students familiarize themselves with the numbering system.”

Forty-three years later, it still is. And they still haven’t.

If you dig TWER and want to help us keep on keepin’ on, please consider a small donation.

Related: She was smokin’ in the classroom…