With the recent news that the state of Alabama’s three largest would be printed only three days a week this fall, it seemed like a good time to pull out some classic reminders of the collectability of newspapers. 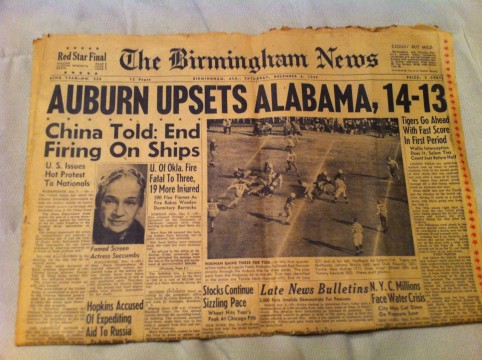 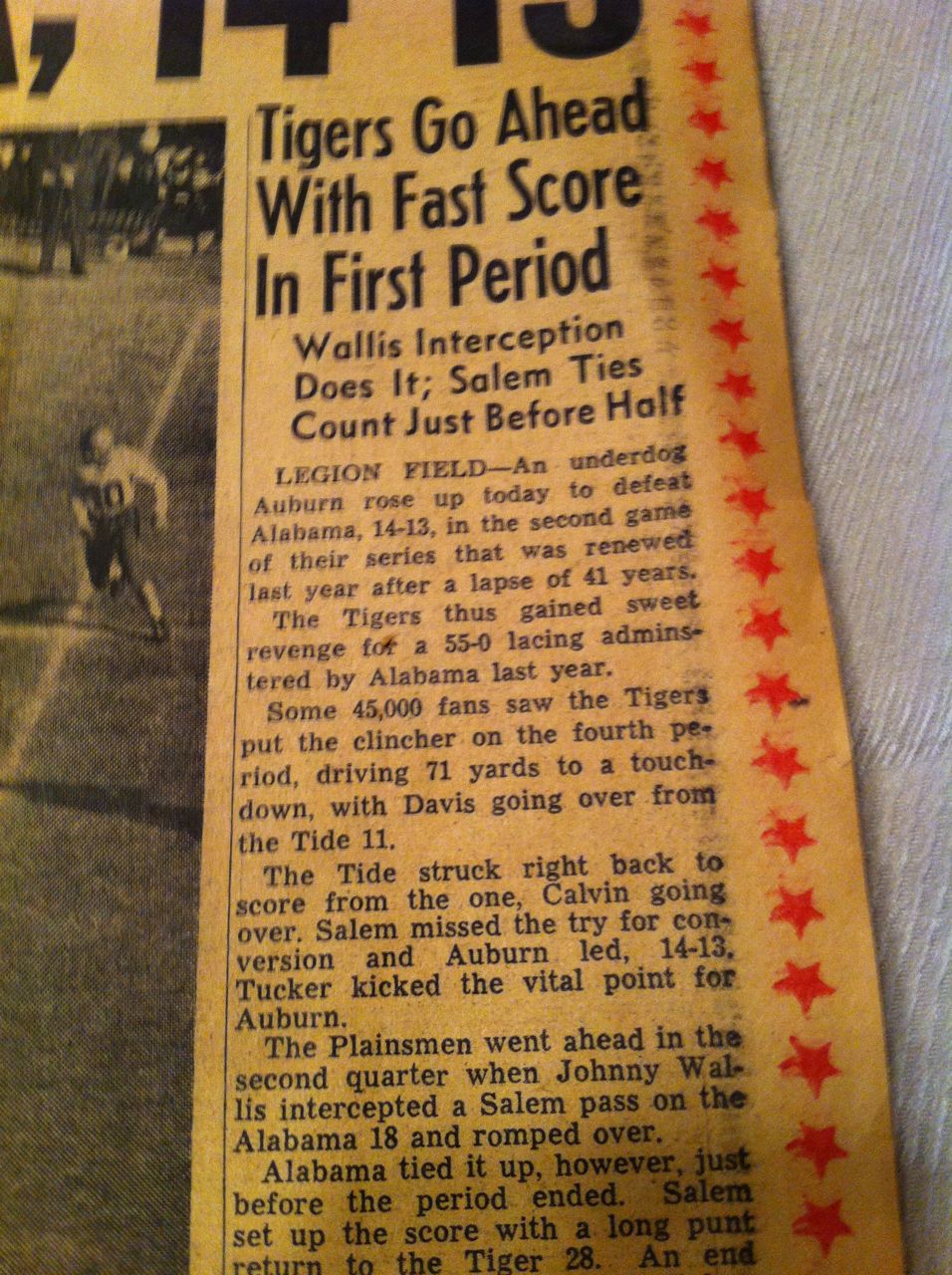 “My dad found this in his father’s desk after my granddad passed away in early 1983.  We talked about loaning/donating it to the Lovelace museum, but considering said museum has been reduced to a few paltry displays in the new arena, I’m rather glad now that we didn’t.

1949 was the second game after the series renewal.  Auburn was a huge underdog, having lost the previous year by about a million to nothing.  In my opinion, ’49 is the only game in the post-hiatus era to rival 1972 as the biggest Auburn upset in the rivalry (I would entertain arguments for 2002 as the third entry).”

“An underdog Auburn rose up today to defeat Alabama, 14-13, in the second game of their series that was renewed last year after a lapse of 41 years. The Tigers thus gained sweet revenge for a 55-0 lacing administered by Alabama last year.” So reads the opening of the game story that was featured on The Birmingham News’ front page story of the game. As Will points out, this upset was momentous for Auburn.  So momentous, in fact, that a few students thought the King of England needed to know about it. So they called him.

The following papers were all submitted by veteran contributor @lulupuppydog: 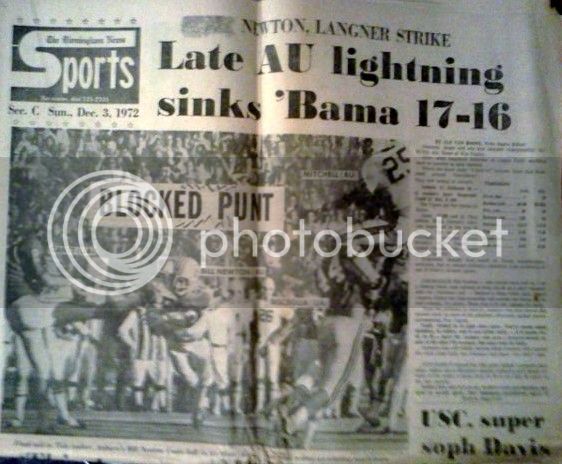 While we’re talking monumental Auburn upsets over Alabama, we might as well see how The Birmingham News captured Punt Bama Punt the day after the game in ’72. The lightning is a nice touch. As it happens, this paper was printed exactly 23 years after the one above.

The Birmingham News the day after Al Del Greco kicked a field goal to win the Sugar Bowl over Michigan (and what could/should have been a National Championship). Note the “Who’s No. 1?” box at the bottom of the page and the column to the right stating that “Auburn has built a No. 1 contender.” Unfortunately the “Miami Hurricanes force Nebraska out of top spot” headline would win the day.

“A pivotal win for the Tigers” reads the headline to the column the day after the Tigers bested Alabama in 1986 to end a two year skid to the Tide. That turned out to be a prophetic headline, as this win would start a four game streak for Auburn in the series.

This one might be my favorite of the bunch. It’s not the excellent “It’s the Iron Age for Auburn” headline at the top of the page or the “Tigers win third straight over Tide.” It’s not even the “Dye’s grip on the state is tightening” column header. It’s the fact that Paul Finebaum wrote that column. That he wrote that once upon a time coupled with the picture of him with hair on his head puts this one over the top.

Love the headline, love the pic of the goalpost going down, love the pic of Bowden getting smooched on the cheek, but most of all I love that the Advertiser added some Terry style “AttitUde” to their front page.

Auburn’s student paper captured the end of the ’93 perfect season with a headline that only they could get away with and a shot of a rollicking Toomer’s Corner. Perfect.

That will do it for this edition. (To see past weeks treasures, click here). While you can’t feel the paper or see the ink stains on your fingers, I hope it brought back memories of a time when you cracked open papers to see a headline of Tiger triumph. Times change and we all have to adapt, but we don’t have to forget. Thanks to our contributors this week for helping us remember. If you have something you’d like to share, send it to me at [email protected] or tweet me @FearlessandTrue.