Mr. Comer (and later Mr. Smith and Mr. Hornsby) recently turned me on to a gallery of old Auburn football photos—328 to be exact—archived by the Anniston Star. The photos span an approximately 15 year period of Auburn history, from the late 70s into the early 90s. You’ve got rare Bo publicity photos, Terry Bowden press conferences, and more Barfield fashion.

But most intriguing, to me, at least, are the two shots that look to have been snapped at the closed-circuit screening at Bryant-Denny Stadium of the probation-ized 1993 Iron Bowl played in Jordan-Hare Stadium. 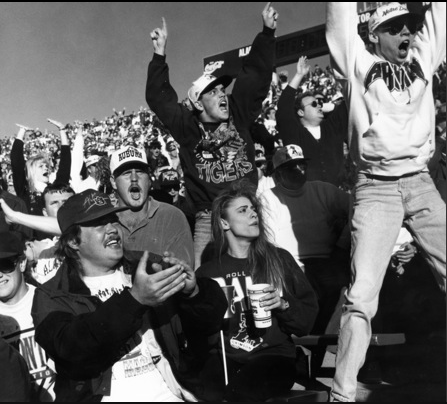 I’m sure there are plenty of photos from it that exist, I’ve just never seen them. It was supposedly the first and only football game to sell-out two stadiums (or at least one stadium and the 44,000 available Bryant-Denny tickets) or something—wasn’t that what everyone was saying? I always wondered what it was like to have been there. Nice to know that, from the looks of things, it was probably as awesome I always imagined—look at all that AttitUde!