The statues honoring Auburn’s three Heisman Trophy winners, Pat Sullivan, Bo Jackson, and Cam Newton will be installed some time next week according to Cassie Arner, Auburn’s assistant athletic director for public relations. But how will Auburn keep the statues under wraps until they’re unveiled a few hours before next Saturday’s annual A-Day game? By keeping them under wraps—literally—during the installation. And under 24-hour police guard.

“They’ll be covered the entire time,” Arner said. “And we’ll have security.”

But anyone walking past the east entrance of Jordan-Hare Friday afternoon could have caught a sneak peak of the finished bust of former Auburn coach John Heisman, commissioned at the same time as the statues and which will also be unveiled (at least officially) Saturday.

That plaque at the base of the bust reads:

Auburn’s first coach of national renown, Heisman led Auburn from 1895-1899. On November 7, 1896, Heisman’s Tigers defeated Georgia Tech 45-0 in the first game ever played on the Auburn campus. His 1897 team was undefeated. Always an innovator, Heisman pioneered the center snap and the forward-pass, first known as “Heismans’s forward pass.” In 1971, Auburn University became the first school where Heisman coached to have a Heisman Trophy winner. Heiman was inducted into the College Football Hall of Fame in 1954.

UPDATE: Here’s a wider shot of the bust. Of the three remaining pedestals, two are to the left, one to the right. 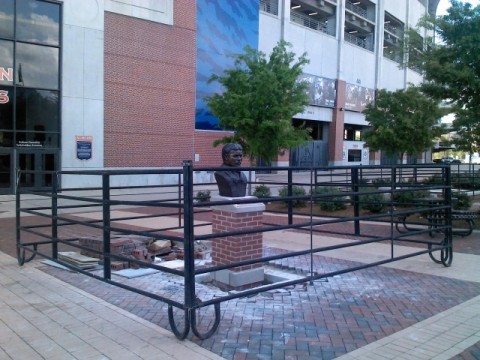