Day Two of Bo Bikes Bama found close to 100 riders following Bo Jackson through Cullman County. The group stopped at Fairview High School where they were greeted by elementary, middle and high school students. The Auburn fight song welcomed the riders to the school as they grabbed snacks and water. 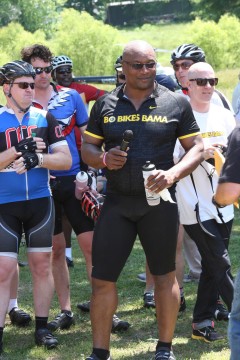 Jackson took a few minutes to address the students and thank them for their support. He said the ride wasn’t about the Tigers or the Tide, but about the state of Alabama. Jackson and the accompanying riders are raising money for the state’s tornado recovery fund. After school administrators handed Jackson $450 raised by the elementary school, he jokingly scolded the older students.

Jackson posed for a few photos along with several other cyclists, including former NBA star Scottie Pippen and former U.S. Olympic skier Picabo Street who were part of his entourage. The ride Wednesday was the longest leg of the trip at 65 miles. The routes for the other four rides are approximately 50 miles. Jackson started in Henagar and will end Saturday in Tuscaloosa.

Lance Armstrong and Cam Newton are expected to join Jackson along other parts of the ride. To keep up with the journey or to donate, follow @BoBikesBama on Twitter or visit bobikesbama.com.