This is the first post in what could be a series of considerations of Auburn literature. If you have any suggestions, any favorite Auburn-y books, send suggestions to [email protected]. We are lax when it comes to what is and isn’t an Auburn book. All ideas welcome. Heck, write something about your favorite book. Paint a picture, make a short movie involving all your cats and the neighborhood children. Go wild. 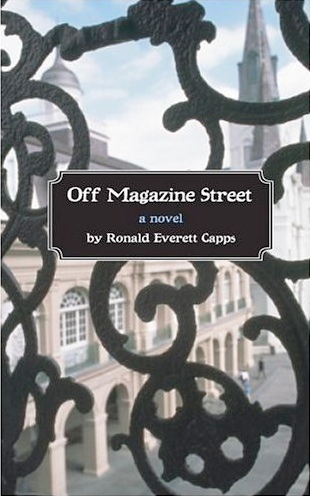 Auburnness: The author, Ronald Everett Capps, is an Auburn alum and the fictional Bobby Long is an Auburn Ph.D. and former professor. Jeremy wrote a stellar post outlining the plot of A Love Song for Bobby Long, the movie version of the novel. He got at the heart of the Auburnness. This post serves as a look at the book itself from what could be called a critical angle.

Roughly put, a novel can succeed in several ways. 1.) Plot, character development, and the power of narration. 2.) The strength of prose style and the evocation of mood and place. 3.) 1 + 2. Off Magazine Street is of the first order. The prose can be flat and obvious, the dialog sometimes feels forced, and the descriptions of New Orleans aren’t spectacular. But Capps succeeds with character. Bobby and Byron don’t so much grow as fictional people—it’s doubtful Bobby and Byron have “developed” in any meaningful way—but there’s plenty of character. As your momma or daddy might say—“That boy’s a real character.” Bobby and Byron are characters of the Southern sort. They’re drunks, they’re layabouts, they’re perverts. Mostly, they’re drunks.

Here’s how the book begins:

Standing with his back to the kitchen sink, lighting a cigarette from the stove that would be turned off that day, a man glanced about his house trailer. He had loaded an old Pontiac with all he planned to take. He stepped to the refrigerator, empty except for a pint bottle of Popov vodka, a woman’s shoe, an orange juice can and a paperback copy of Portrait of an Artist as a Young Man.

Thus enters Byron Burns, “forty-nine years old, underweight, his auburn hair beginning to fade.” Byron graduated from Alabama, where he was undone by “a lust for wine, women, song and good writing . . . and Bobby Long, another Eanes fair-headed boy, seven years to the month older than Byron.” Bobby Long is a Ph.D. and former English professor at Auburn. He left his first wife and family for a younger, prettier wife. His younger, prettier wife left him for another man. Byron’s life list reads much the same. Bobby and Byron spend their drunken days in New Orleans playing cards and quoting snippets of literature and poetry at each other. It’s a grotesque lifestyle.

And Bobby and Byron are grotesques, in that they are strange, fantastic, ugly, and incongruous. They “just ain’t right”; they “are a bit off”; they’re freaks. They continue a tradition of Southern outsiderness from Faulkner to Flannery O’Connor to Cormac McCarthy to Barry Hannah. O’Connor, in her essay “The Grotesque in Southern Fiction,” writes: “Whenever I’m asked why Southern writers particularly have a penchant for writing about freaks, I say it is because we are still able to recognize one.” But just what is a “freak” in O’Connor’s opinion? The often omitted continuation:

To be able to recognize a freak, you have to have some conception of the whole man, and in the South the general conception of man is still, in the main, theological. . . . I think it is safe to say that while the South is hardly Christ-centered, it is most certainly Christ-haunted.

It might be facile or boorish to round it all back to JC and the gang, but there has to be some common head-bobbing agreement when it’s said that for Southern youth of the “fair-headed,” star athlete, intelligent sort there’s a path—call it The Path. The Path for these sorts involves higher education, a loving and lovely spouse, regular church attendance, at least two fair-headed offspring, and a house with a mowable yard. Bobby and Byron stepped off The Path, surrendered to “a lust for wine, women, song and good writing.” As such, they have condemned themselves to the life they live—the life they must live. As Bobby tells Lorraine early in the book:

No, it wasn’t whiskey. It was life, woman! Experience. With Byron it was too much knowledge, too fast. Not only was he a football star, he was a bookworm. And he loved women, too much. I did too. We have always had too much lust for life, and never understood people who did not. We’ve always been livers of life. Spectators, we never were.

Which certainly puts a positive spin on the situation, and that seems to be more the goal of Capps’ novel. Capps presents these two, Bobby and Byron, in all their broken, perverted, piss-stained glory with a wry humor, as if he, Capps, is prodding all those who chose The Path, as if he is saying, You’ve got your lawns and your houses and your piety, but this is part of what you’re missing; this is a part of your humanity you’re denying. Most people wouldn’t trade. It’s hard to imagine any reader wanting to live the life of Bobby Long and Byron Burns. But as Byron says, “People can’t help it. We’re all victims of being whatever we are, I guess.”

Admitting no intimate knowledge of Mr. Capps, this, however, reads like the words of a man who’s been a “liver of life.” And that’s the temptation, isn’t it?, to read any strong, distinct voice in fiction as the voice of the author speaking from personal experience? Perhaps that’s a personal problem, but perhaps not. J.D. Salinger was Holden Caulfied and Walker Percy was Binx Boiling and Fellini was Guido Anselmi. This is the temptation as the viewer, especially if the life of the author and that of the character overlap.

Of course, of course, not every work is an expression of the author’s life. Vladimir Nabokov was not Humbert Humbert. Nabokov, in his afterword to Lolita, said he wrote for “aesthetic bliss, that is a sense of being somehow, somewhere, connected with other states of being where art (curiosity, tenderness, kindness, ecstasy) is the norm.” Artists create for different reasons. People do different things. Who can know a man? We try and we reach and we say we understand. Mostly, we try. The answer is the consideration.

Byron Burns on writing his book about Bobby Long:

He never intended the story to be biographical—he only wanted to tell a good story. But somehow, along the way, truth had gotten in his way, and there was something about Bobby Long he always felt needed saying.

Off Magazine Street was published in 2004. Capps hasn’t published a book since. Maybe he said what he felt needed saying.

* Who does not love wine, women, song,
Remains a fool his whole life long.