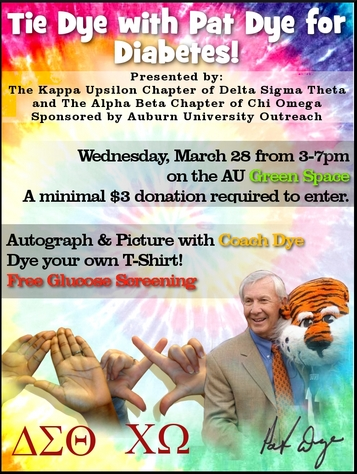 You like my shirt? Thanks, Pat Dye helped me make it.

The event, Tie-Dye with Pat Dye, is hosted by the Delta Sigma Theta and Chi Omega sororities and is a fundraiser for a local diabetes camp. Simmons was diagnosed with type 1 diabetes his rookie season with the Pittsburgh Steelers.

He manages his diabetes through diet, blood sugar checks and insulin shots. Simmons helped lead the Steelers to two Super Bowl titles after being diagnosed. Dye and Simmons haven’t worked closely together on a fundraising project before, but Coach said he was “happy to help.”

“I knew Kendall when he was at Auburn,” Coach said. “He’s a great guy.”

Coach has never tie-dyed T-shirts before, but said he’s up for anything.

“The sorority called, and I just wanted to help,” he said. “I’ll do whatever they tell me to do.”

For a donation of $3 or more, you can tie-dye a T-shirt from 3-7 p.m. Wednesday on the green space outside of the student center. Dye and Simmons will be on hand for photos and autographs from 4-6 p.m. And of course, to help with the tie-DYEing.

The proceeds from the fundraiser will benefit Camp Seale Harris, located in Jackson’s Gap. The camp is open to children and teens with type 1 diabetes as a way to encourage them and show them the possibilities even with diabetes. Simmons is living proof goals can be reached and dreams exceeded despite a physical disease requiring constant attention.

According to Wire Eagle, the School of Nursing, Harrison School of Pharmacy, the Student Nurses Association and the Student National Pharmaceutical Association will provide free blood sugar screenings from 3-7 p.m. They’ll also have educational material on type 1 and type 2 diabetes, as well as information about how to best prevent type 2 diabetes.

The event is sponsored by the Office of Outreach, Harrison School of Pharmacy, School of Nursing, Copycat and Chick-fil-A.

Victoria Cumbow is a 2008 Auburn graduate. She’s a Communications Specialist with HudsonAlpha Institute for Biotechnology in Huntsville and a freelance journalist. Find her online at victoriacumbow.com  and follow her on Twitter @victoriacumbow.