So every Friday, a bazaar is held near the International Security Assistance Force (ISAF) headquarters (HQ) in Kabul, Afghanistan. The locals gather. They sell their wares. And they have their picture taken with a giant Auburn foam finger. Or at least the guy who was pallin’ around with Drew, the Department of Defense civilian contractor who was walking around with the giant Auburn foam finger, did. 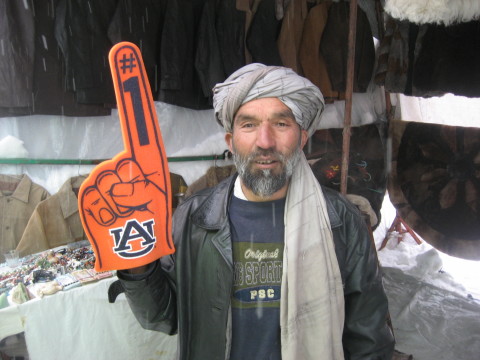 And we’re not surprised. Afghanistan has been reppin’ Auburn pretty hard lately.

See something AUsome? Weird? Today? Whenever? Take a picture of it? Send it to us at [email protected]

Pre-order a TWER shirt for just $10 (that includes shipping)!