Auburn folk are forestry pros from way back, right? So why in the world did the dudes who planted the trees—and surely their prominent placement implies that their planters intended them to live long and prosper as objects of at least some reverence—decide on live oaks, a species whose less than ideal relationship with Auburn’s climate and soil has been hammered into our collective understanding of the Toomer’s Oaks with every news story and press release issued over the past year?

But their recently updated age has produced a couple of theories at least as to where they came from.

“One (theory) is that they were planted or donated by the Civilian Conservation Corp who were working at Chewacla State Park, camped near Auburn, and had borrowed camera equipment from Auburn,” says, you guessed it, Auburn horticulture professor Dr. Gary Keever.

A video of the CCC’s work at Chewacla (and other marvels of Auburn’s 1930s) was posted to YouTube (and to TWER) last year.

Another theory (and just a theory) is that oaks were donated by Tom Dodd Jr., a nurseryman from Semmes, Ala. who Keever says donated the majority of the plants used on campus “from about 1985 until 2000.” Yes, oaks aren’t listed on his company’s stationary as a “specialty,” but live oaks are apparently pretty popular down in Semmes and other parts of south Alabama. And Dodd was apparently palsy enough with the Auburn administration—three “boys in the family” attended Auburn—to donate a camellia to the school, a camellia named “Miss Auburn.” 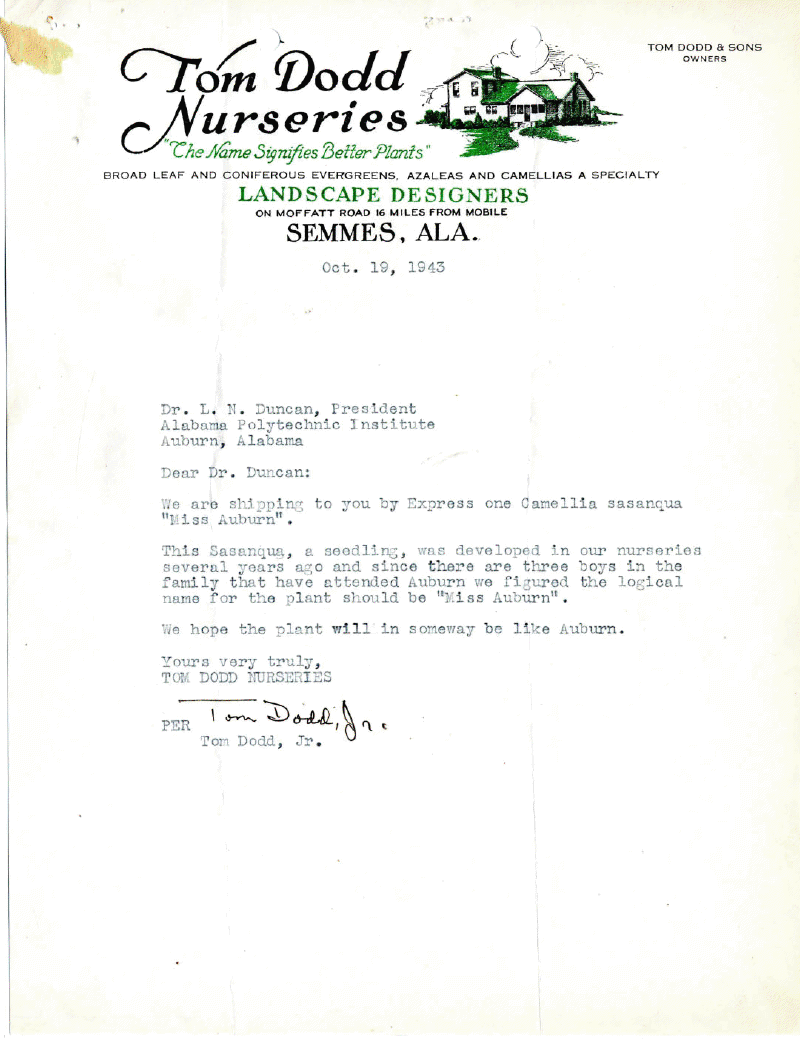 Peep that “hope the plant will in someway be like Auburn” line. 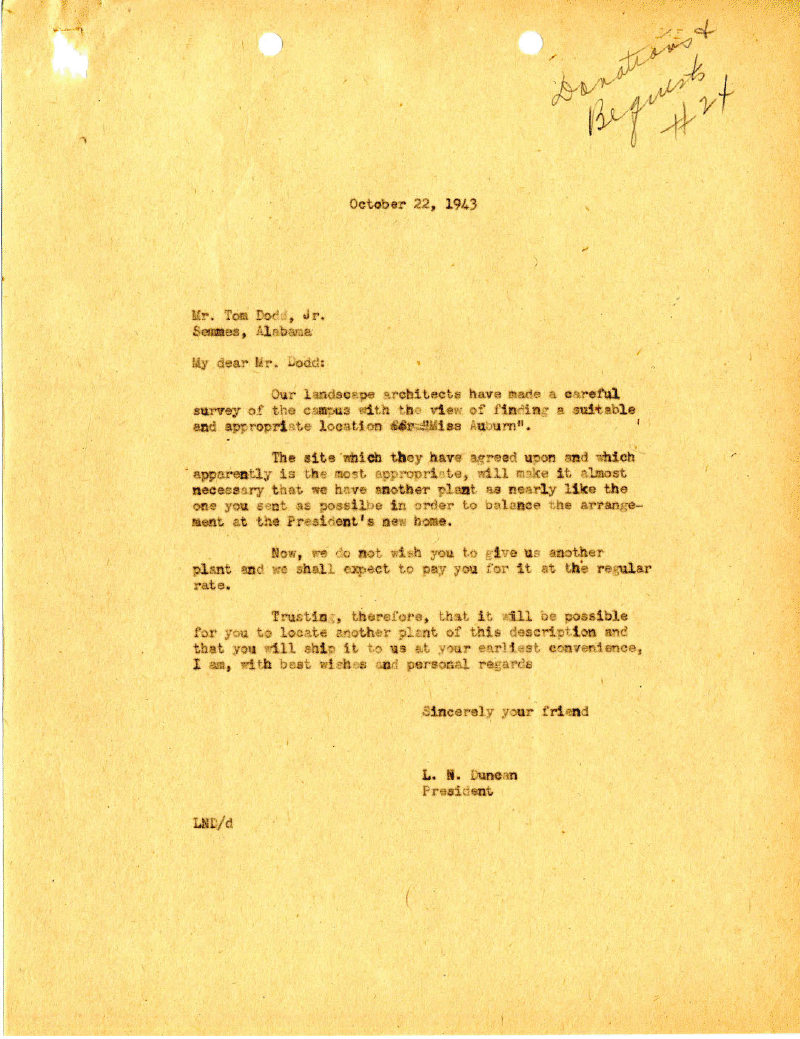 Second sentence: “The site which they have agreed upon and which apparently is the most appropriate, will make it almost necessary that we have another plant as nearly like the one you sent as possible in order to balance the arrangement at the President’s new home.”

So what do we have here? At the very least, evidence that the school had a tree guy who thought in terms of sylvan symbolism specific to Auburn (and who lived and worked in a place with live oaks to spare, but who, you know may not have known a whole lot about them), and landscape architects who (sure, probably like all landscape architects) were sticklers for symmetry. Give us two plants or give us nothing!

It proves nothing. But if it’s a Toomer’s Oaks creation story planting scenario you’re trying to grow, those are surely ideal conditions. We just can’t say the same for the oaks themselves.

It takes more than 200 hours per month to produce, edit, and maintain The War Eagle Reader. If you like what we do, and you’d like to help us keep doing it, please consider making a small donation or advertising with us.

Related: Here’s what the type of tree that might replace Toomer’s Corner looks like / Wire system being considered as temporary solution for rolling Toomer’s.

* The Burger That Made Auburn Famous
* Auburn grads start the Netflix of neckties
* The Bo Jackson of Bo Jackson collections
* The Auburn Tiger (at the Birmingham Zoo)
* Auburn Playboy shoot at Chewacla during power outage
* That’s a TIGER of a Shug mural
* Can an Auburn fox help Cox rock JOX?
* Catching up with Auburn’s former Sports Illustrated swimsuit issue model