And no, that’s not a lame New Year’s joke. The 67-41 win at home was truly the most complete and well-rounded game that Auburn has put together this season.

Obviously the big news of the night came with Kenny Gabriel recording the first triple-double in Auburn basketball history, blocking 10 shots and bringing down 13 boards to go along with his 24 points. It’s a tremendous accomplishment all on its own, something that years has never been done in 106 years. But, perhaps best of all, it’s something that couldn’t have happened to a better member of this team. Regardless of how the rest of the season plays out, the senior has cemented his legacy at Auburn as a team leader of the first group that took the floor in the new Auburn Arena, and as someone who stuck through coaching changes and hard times and continued to lay it all out there for his school — and now, fittingly, he’ll be forever etched into the record books.

The rest of the Auburn Tigers played a very balanced and complete game on Monday night as well. Frankie Sullivan continued his consistent play with a 9-point and 5-rebound performance, and continues to be a dependable anchor for Auburn on both ends of the floor, even on his off nights. Varez Ward dished 10 assists and laid down a textbook point guard performance, despite not scoring a point all game. And Chris Denson finished with 10 points off the bench, where he’ll likely continue to play, providing a spark for Auburn as the Tigers’ sixth man.

Meanwhile, Noel Johnson played cleanly in his first start of the season, and for the first time this year Auburn fans got a taste of the starting lineup they were picturing all of last season, when they watched Sullivan, Johnson, and Ward sit on the end of the bench in warm-ups, out due to injury, or NCAA transfer rules, or, in Ward’s case, both.

In the end, the Tigers played the excellent lock-down defense that their coach preaches, they found ways to score with consistency on offense, and their big-time players all played within themselves and fulfilled their individual roles. Again: Auburn played some of the best basketball that is has played all season, and it couldn’t have picked a much better time to start playing strong.

It comes at a surprising time, after the Tigers looked to have only taken several steps back a game ago in its narrow 78-75 escape against Georgia Southern. Tony Barbee laid it into his team then that they had a long way to go before conference play began. It was a wonder then if the team was going to be as prepared as possible before their SEC opening at Vanderbilt on Saturday. One win against Bethune-Cookman at home isn’t going to change much, but at least the Tigers have seen what they’re capable of here in January, and after having not won anything convincingly since before the Hawaii trip, it’s nice too that they won’t carry a drought into conference play.

Instead, Auburn is 10-3, undefeated at home, and that’s how their season will stand when they take on Florida State in Tallahassee tonight in the Tigers’ final non-conference game of the season.

Auburn has had the Seminoles circled as one of its hardest non-conference tests. Auburn’s schedule has been very kind, and while a solid win/loss record and that invaluable experience is great in developing a culture of winning, Auburn hasn’t had too many chances to test their mettle against big-time foes this season. Auburn’s inexperience was likely evident in it’s lost to Long Beach State in Hawaii, as the battle-tested 49ers, who played one of the nation’s toughest out-of-conference schedules, seemed more prepared to play—and win—in the spotlight than Auburn did.

When all is said and done, tonight’s contest could prove very pivotal in telling just how successful the first half of this season has been. Auburn has proven themselves at home, posting a 9-0 record in Auburn Arena, with consistent wins coming against teams the Tigers were in position to beat, and with a quality victory over South Florida out of the Big East. Auburn’s loss in its first road game of the season at Seton Hall (who just knocked off No. 8 UConn) was no surprise, and neither was its holiday tournament loss to Long Beach State. However, the biggest disappointment of the season thus far has to have been Auburn’s loss to UTEP in that same tournament’s consolation game.

But Auburn has a chance ahead of them to hold their head just as high as they could have had they returned from Hawaii as the conquering, 2 out of 3 heroes by offing the Seminoles tonight on the road. They were able to beat Florida State a year ago at home in one of their most memorable games last season, behind a spirited (albeit temporary) return by Frankie Sullivan. The Seminoles will be ready to avenge that loss on their own home floor—although, this time around, they’re without last year’s star Chris Singleton.

It’s not a likely victory for Auburn just yet, but it’s a winnable game. And, suddenly, if Auburn is able to top Florida State tonight, they’ll be steamrolling into conference play at 11-3, and capping what would have to be considered one of the most successful non-conference seasons Auburn has had in years.

But if the Tigers fall in Tallahassee, they won’t have much time to dwell on the defeat before traveling to Vanderbilt on Saturday.

Regardless of how the schedule has played out for the Tigers thus far, January is here, and beginning with Florida State, the toughest tests on the schedule have arrived. Auburn’s SEC schedule begins this weekend, and the Tigers have one last chance to prove that they’re prepared for it. Vanderbilt and Kentucky are right around the corner, whether the Tigers are ready for them or not. 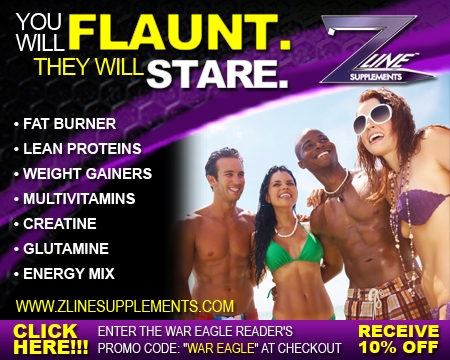