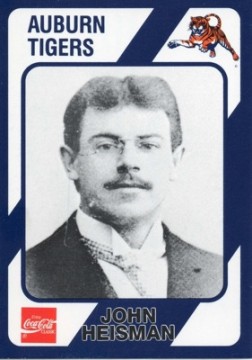 Auburn remains the only school where John Heisman coached football to have a player win the Heisman Trophy. We know this. We brag about it in media guides. We bust it out whenever we can. But it’s so nice to have that deep down, historical assurance that John Heisman—Papa H. we used to call him*—didn’t just coach football at Auburn, he loved Auburn.

He told us so in a letter.

He wrote it after deciding to resign from coaching in order to, in part, pursue acting. (And sure, to coach at Clemson, but they don’t have any Heisman winners, so who cares?) It was printed in The Plainsman (then called the Orange and Blue) and later in Rich Donnell’s great book of quotations on Auburn football, “Down Through The Years.” It’s beautiful.

At last we are to part. Is it not hard to believe? There are tears in my eyes, and tears in my voice; tears even in the trembling of my hand as I write you.You will not feel hard toward me; you will forgive me, you will not forget me? Let me ask to retain your friendship. Heaven knows I never felt more in need of it than I do at this moment.

Can a man be associated for five successive seasons with Grand Old Auburn, toiling for her, befriended by her, striving with her, and yet not love her? No. Where on earth’s surface have I found better friends, manlier sportsmen, truer gentlemen than among the sons of the deservedly popular A.P.I.

The many fresh evidences I have lately received of your unwavering respect and esteem for yo me have touched me to my heart’s center. It is true that “prosperity brings friends and adversity tries them” Our friendship has more than once been thoroughly tried and never yet found wanting.

You believe in me—you trust me. Let me ask for a continuance of that faith. It shall be my life’s endeavor to prove myself worthy of it.

I hope this is not the end. I hope that we shall meet again. The recollection of these years of mutual endeavor, of mutual joy over all that was good for Auburn, of intermingled sorrow over all that was bad for Auburn, shall never fade. To you, to your faculty, to your friends, who have all been so kind, so just, so unfailingly true to me that I doubt I deserve it, I say “Farewell and yet I say “Aufs Wideuschen.”

May God bless you, everyone!

Devotedly ours, now and forever.

* Totally made up, but I mean, maybe.