“Another Bjork story?” Another Bjork story— don’t judge me, don’t you dare judge me. I just dig her. I can’t help it. Her big record came out the month I started college. There was a poster of her hanging behind the bands at the Malformity House. I associate her with a lot of big, good things that happened once upon a time. I don’t even listen to her that much but of course when I do it’s like I’m listening to a rock opera live from Fantasia’s last grain of sand.

And when I heard 10 years ago that her old Icelandic band… somehow… played Auburn back in 1988, it was like kind of finding Bo Jackson’ name in the back of the used copy of “Tess of the d’Urbervilles” you bought at Anders Bookstore your freshman year—you’ve been reading Bo’s book all these years.

Sure, everyone who was actually at the show says The Sugarcubes’ set sucked [go here and judge for yourself] and that everyone was there for Living Colour and The Godfathers (because that was the original lineup, The “Icecubes from Sugarland” were tacked on last minute because MTV needed to kill two bills with one concert thanks to a scheduling snafu—I went into all that the first time) and that Living Colour really blew everyone else off the stage. But the point of the first story was this: Bjork was in Auburn. (Bjork was in Auburn—for crying out loud, she was in Jordan-Hare). And the point of this story is that, thanks to the first story, I manged to get in touch with and interview the person who hung out with and took pictures of Bjork in Auburn, and I have since received new visions—like, oh, you know, Bjork popping a bottle of champagne in the dressing room after the show next to an Auburn cup that she presumably used to drink it with— and new revelations.

Her name is Mia Dentice. She came to Auburn from Florida on a cross-country scholarship in 1987, volunteered at WEGL, and was picked to squire the Icelanders around Auburn because she was hip, i.e., she wore all black. 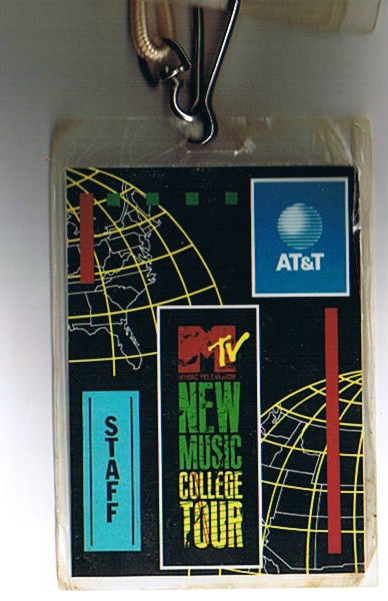 Mia: I called the UPC major events office and asked if they needed any help. They said ‘yes, just show up.’ When I arrived and introduced myself, I believe it was the production coordinator who immediately grabbed me and said ‘GREAT, YOU’RE IN BLACK. COME WITH ME’. The first part of the evening I spent in the production office fielding calls from New York and L.A. They were still getting film direction. Jay Rowe, who produced Billy Joel in Moscow (in 1987), Dana Marshall of MTV, and a couple of others would pop in and out.

At the Hotel at Auburn University and Dixon Conference Center.

Mia: They were already starting to drink and I had to watch that room like a hawk so the room wouldn’t get trashed. And Bjork loved ABBA’s Dancing Queen and she and I were back in the room dancing to Abba. There were a whole bunch of other production people up there and Siggi apparently liked throwing the (hotel) Bibles out the window. Thank God they were closed—can you imagine that happening at Auburn? So I was guarding the room. I wasn’t 21 but I heard stories about them down in the bar. Lots of people were going to the bar and coming back up, and some of the other mischief Siggi got into was—at the conference center there’s a sitting area on each floor while you wait for the elevator and Siggi started putting a piece of furniture from each room into the elevator so that by the end of the night the elevator was completely full of furniture (a complete sitting room in the elevator).

At Jordan-Hare Stadium for the photo shoot (the day after the concert).

Mia: I went to class and it was Hey Day and I grabbed some name tags from one of the tables and the met them for breakfast at the conference center. They wrote their names on the tags and put them on them and they were wearing them for those stadium shots. If you look, you can see the little Hey Day name tags.

On the legacy of Hey Day being The Sugarcubes last day in Auburn.

Mia: By the way, do you have Here Today Tomorrow, Next Week? On the cassette, there’s a short song called Hey! It’s about their time in Auburn.

Me: That song is about Auburn? Dear God. Like, are you just assuming that, or…

Mia: No, they told me. They gave me their address and I kept up with them for a while.

Photos and captions in quotes via the wonderful Mia Dentice.