Working backward, Coach Pat Dye was the very first to refer to the last three SEC opponents that Auburn faced each year as “Amen Corner.” (What year he FIRST coined the phrase is still being investigated by The War Eagle Reader. More later? Maybe? To the stacks!) 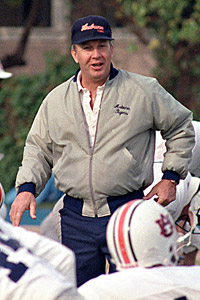 “I don’t know when I first started calling [our last three games] ‘Amen Corner.’ You know I’m from Augusta, home of the Masters golf tournament. And they call holes No. 11, 12 and 13, ‘Amen Corner.’ Many a tournament has been won or lost on those three holes. Well, we had to finish our season every year with Florida, Georgia, and Alabama. If that’s not the ‘Amen Corner,’ there ain’t one. Three strong teams known for their strong defenses. … I don’t think a lot of schools have beaten those three teams three straight times.” — “In the Arena” by Pat Dye with John Logue

Sadly, Aubie doesn’t get to try on new Gator-skin boots each year anymore, so the only way to have a TRUE three-game “Amen Corner” nowadays is to get at ’em in the SEC championship, right Coach?

“Even though the Tigers lost Florida as a regular on the Amen Corner schedule from when I was coaching, if Auburn plays well enough to win its final two SEC regular season games there is a real possibility of facing the Gators in Atlanta at the SEC Championship Game.” — Pat Dye, “Dye-Log: Amen Corner Stretch Awaiting Tigers”

According to Dye, there was even a “Burma Road” leading to “Amen Corner” one year:

Auburn Coach Pat Dye has long referred to his team’s annual late-season stretch against Florida, Georgia and Alabama as “Amen Corner” because, like the famous holes at the Masters, championships often are won or lost there. But this year Dye says the Tigers must cross “Burma Road” before they get to “Amen Corner.” The Army built the road during World War II to reopen supply lines cut by the Japanese. Dye has applied the term to Auburn’s next five games, a rugged stretch that includes Tennessee, Kentucky, LSU, Florida State and Mississippi State. Dye: “Normally, I would say if we survive Amen Corner, we would be a Top Five team. But I can’t say that this year, because we’ve got to travel the Burma Road before we get to Amen Corner.” — Orlando Sentinel, Sept. 29, 1989

(For those looking for similarities from this year, I’d say Auburn’s “Burma Road” march took place during the month of October — at South Carolina, at Arkansas, Florida at home, at LSU, and then a “beary” satisfying finish with Ole Miss.)

But who originally called those torturous holes that swallowed souls in Augusta “Amen Corner”? Well, it sprang from the mind of Herbert Warren Wind in his April 21, 1958 Sports Illustrated article about the Masters that year. Wind was also the author of the popular (but now out of print) The Story of American Golf. But why did he decide to call those three holes “Amen Corner”?

In a Golf Digest article in April 1984, 26 years later, Wind told about its origin. He said he wanted a catchy phrase like baseball’s “hot-corner” or football’s “coffin-corner” to explain where some of the most exciting golf had taken place. Thus “Amen Corner” was born. He said it came from the title of a jazz record he had heard in the mid-1930s “Shouting in that Amen Corner.”

And so, dear Reader, for your listening pleasure that song, “Shouting in that Amen Corner,” can be heard here:

Mildred Bailey recorded “Shouting In That Amen Corner” with the Dorsey Brothers Orchestra in New York, Sept. 5, 1933. Also recommended, “Mrs. Swing” has just the thing if you have “(Beating) Georgia on My Mind.”

So for that last act of this years “Amen Corner,” let’s do like Mrs. Swing tells us in those last few notes: Put Ol’ Saban on the run.