Auburn University recently released “Before and After” pictures of the Toomer’s Oaks that speak 2,000 depressing words. 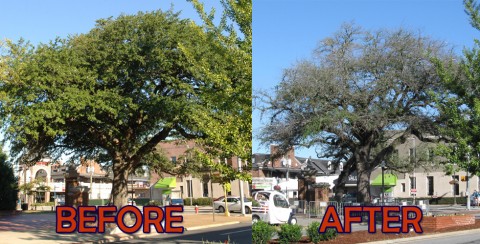 The date of the “Before” photo isn’t specified, but it’s obviously before Bama fan Harvey Updyke claimed he poisoned them. The “After” shot was taken in mid-October.

According to the Toomer’s Task Force, whether the trees produce new growth in the spring will best determine their chances of survival.

* Graffiti on the barricade around the Toomer’s oaks
* So a Playmate walks into Jordan-Hare…
* R.E.M. in Auburn
* Auburn one of seven schools represented in new TOMS shoes line
* Dirty Auburn, Kinkiest Village of the Bizarre!