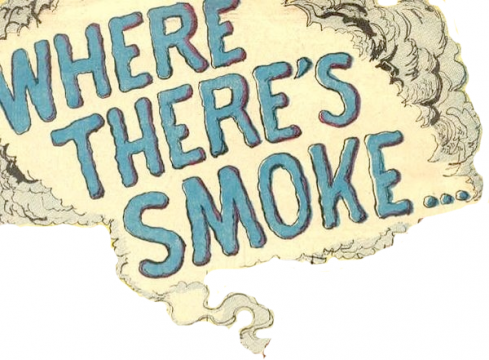 So Auburn has been investigated, weighed and measured, and not found wanting.  Oodles of interviews later, after TV episodes, an eternity of radio hours, pointed fingers and forked tongues, nothing.

But, but—where there’s smoke, there’s fire! Not a false principle, but not a principle such that if its premise is true, it conclusion necessarily follows.  What it really amounts to is—if there is smoke, there is probably fire.  The same kind of thing is true of the argument that many liked:  Cam’s father asked for money from Mississippi State, so he must have asked for money from Auburn.  (And since Cam came to Auburn, Auburn must have ponied up.)  At best, that argument could only establish a probability.  It is consistent with both arguments that their premises could be true even while their conclusions are false.  And it now appears that their conclusions are false.  After all that investigating, nothing.  So it is likely that nothing in fact happened.  Sure, it could have.  But that now means little more than that it is logically possible that Cam got money but the NCAA could not find out anything about it.  A reasonable person must now know that it is unlikely that Auburn paid Cam (or any of the HBO Four).

The only principle that is sure here, and the only one that appears to apply is this:  Where there’s smoke, there’s smoke.  And now even the smoke has cleared.

Dr. Jolley is a philosophy professor at Auburn University. He works in the theory of judgment, the history of 20th-century philosophy, metaphilosophy and philosophical psychology. He was recently profiled by The New York Times. He also likes football. His book “The Concept ‘Horse’ Paradox and Wittgensteinian Conceptual Investigations” was published in 2007.  His column “Leisure with Dignity” runs bi-monthly to monthly to whenever. He blogs at Quantum Est In Rebus Inane. Write to him at [email protected].