We’ll just call John Carvalho’s memories of the Kopper Kettle the 4th of our 3-part retrospective on the explosion. The main story is here. We’ve got 78 never-before-seen photos of the blast here. And we’ve got the t-shirt and the song here. The War Eagle Reader is the internet’s No. 1 source for all your Kopper Kettle needs!!!

I did not hear the Kopper Kettle explode on Jan. 15, 1978. I lived in a duplex off Old Mill Road, and I probably slept through the early morning blast, even though folks for miles around did hear it.

It was not until prayer time at First Baptist Church of Opelika, when Pastor Bob Baggott mentioned the explosion, that I realized we had a story. Of course, I stood up and left immediately after “Amen,” and Pastor Bob acknowledged that the Plainsman editor was obviously going to cover the blast.

By the time I got to The Plainsman office, a couple of hours after the fact, everyone was there and we were planning our coverage. Photographers began gradually making their way back to develop their photos. The life-or-death drama — the timing of the blast, which spared the lives of all — was pretty much over by then. We were talking about how to get all of those stories together.

At the time, such special reports were titled, unfortunately, “Plainsman Probes.” They were “double-truck” feature layouts that ran across the center of a section. The layouts could get a little messy; the photos and articles were always solid. Jackie Romine Walburn, features editor, put it together, with input from everyone else, of course.

A few of us ventured toward the corner of Magnolia and Gay, but like everybody else, got no closer than Toomer’s Corner. Our photo staff was allowed close enough to get photos, and we had interviewed the public safety folks. 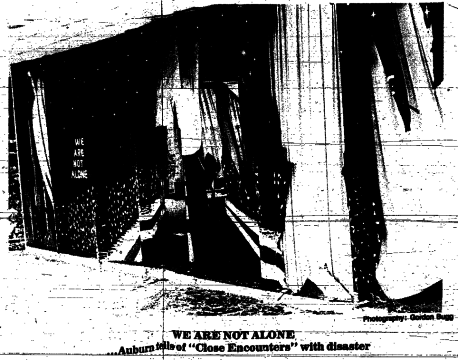 I recall Lauren Steele, our former news editor, coming in and laughing at his own mischievousness. While reporting on the scene, Lauren came across at least one business faculty member earning some extra money doing insurance consulting. The faculty member did not want to be quoted — or noticed.

Dick Parker, news editor, who would be editor of the next year’s Plainsman, was impressed by the creepy irony that the only undamaged window at the Village Theater said “We Are Not Alone,” promoting “Close Encounters of the Third Kind.” [Check out a photo of the damaged marquee here.] I argued that the sentence didn’t go with a random blast that neither involved nor injured any humans, but he held on to it. I was more impressed by the guy whose law degree ended up in his mother’s yard, blocks away. 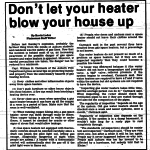 We brainstormed all kinds of articles to cover the various facets of the story. The blast knocked out gas service during a period of freezing weather, so we came up with a story that ended up with the unfortunate title, “Don’t Let Your Heater Blow Your House Up.” Sounds like a pre-USA Today riff.

That night, the duplex was freezing, and my roommate, Jeff Cobb, was down with the flu and miserable. A 2 a.m. phone call to Alagasco didn’t help, but the gas came on soon after, so we all went to sleep.

The section was quite the keepsake for the event. And we were proud that we had jumped on a big story and covered it deep and wide. But that was the tradition we had been handed down by years of Plainsman editors, and we were not going to break that string.

It seemed like the corner remained a pile of rubble with a fence around it for the rest of the school year. Our news staff took its picture in front of the wreckage. Among the staff members posing is Stephanie Wolfe, now Stephanie Wolfe Bell of the State Board of Education. We all bought “Kopper Kettle Memorial” T-shirts and a 45 of “The Kettle’s Gone.”

I can’t say that I missed the Kopper Kettle. To be honest, I never ate there. During the day, we all ate at War Eagle Cafeteria in the Student Union (now Foy). Our late-night Plainsman food runs targeted the Krystal across from the Lambda Chi house or, after hours, the Omelet Shoppe on Glenn that is now a Waffle House.

It wasn’t until I returned to Auburn in 2003 that I realized what was there instead of the Kopper Kettle — a modern-looking five-floor structure comprising a posh restaurant, offices and even condos. Quite a difference from 33 years ago, but not surprising, considering the head start provided by some concentrated natural gas.

John Carvalho, associate professor of journalism at Auburn (and 1977-78 Plainsman editor), blogs about the sports media at johncarvalhoau.tumblr.com. Find him on Twitter at @johncarvalhoau. Read his previous columns here.