Back in April, when it was announced that Playboy was returning to the Plains, we decided to investigate the circumstances (and results) of its previous Auburn panty raids, which began in 1981 and continued in 5-10 year intervals through 2007. Our attention was focused exclusively on the circumstances and results of 1989. The question of whether two Auburn players photo-bombing their way into an issue of Playboy would fly in the age of The Auburn Family (TM) was the only angle that seemed interesting enough to serve as an excuse for a 1,200 word post (TWER is read for the articles, by God…)

But, as we were informed by a reader in a comment posted to our story on Auburn’s latest “Girls of the SEC” contributions, somehow, somehow, somehow we overlooked 1994—specifically (in accordance with TWER’s noble standards) the photo of five, scantily-clad (but at least still clad) Auburn coeds posing in the stands of Jordan-Hare with shakers, footballs, and a string of mini SEC team pennants. 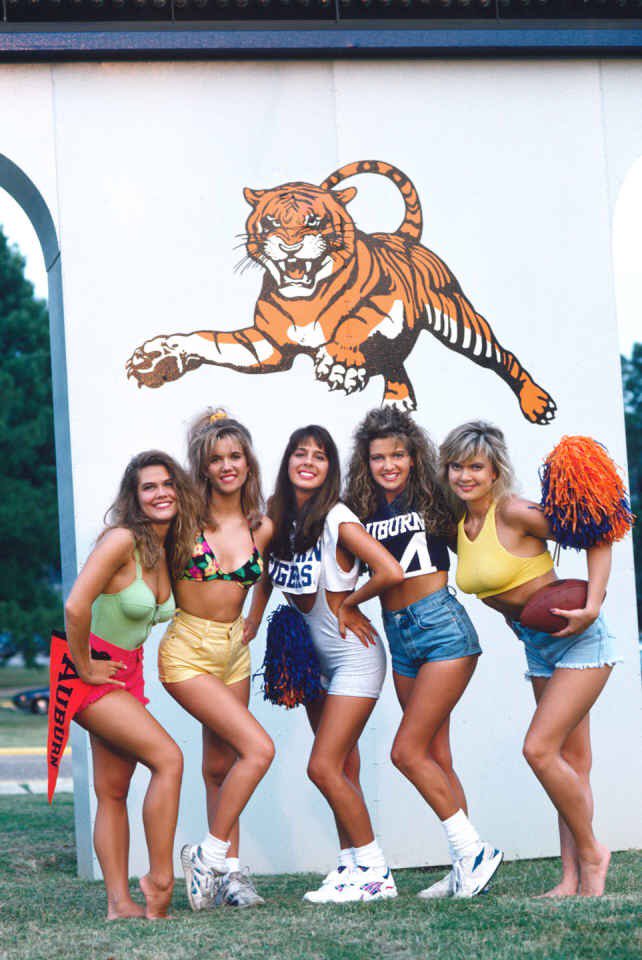 And it kinda seems like our thongy thesis would have actually applied even more to that than the shot of Erica Duh standing above running back Henry Love and wide receiver Dunican Casselberry. Those dudes supposedly just happened by the photo shoot and said “cheese”—it was a spur of the moment, personal decision, not a media appearance sanctioned by the Athletic Department.

Can the same be said for what went down in ’94? Did Auburn officials give Playboy permission to shoot in the stadium (like they gave Bjork)? Or did the young ladies sneak in (like Jaime Edmondson)? Would that happen in 2011? Would eyebrows be raised and letters written if it did? Are we just looking for another excuse to extend our dominance of Google search rankings for “Auburn”+”Playboy”?