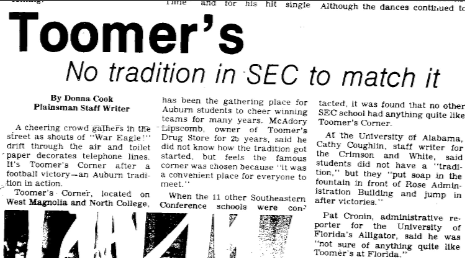 The Plainsman‘s attempt to prove in its November 7, 1977 issue that the rolling of Toomer’s Corner was the most unique tradition in the SEC had a semi-sense of urgency to it. Six weeks earlier, the paper had bemoaned the possible end of the rollings due to downtown renovation.

A cheering crowd gathers in the street as shouts of “War Eagle!” drift through the air and toilet paper decorates telephone lines. It’s Toomer’s Corner after a football victory—an Auburn tradition in action.

Toomer’s Corner, located on West Magnolia and North College, has been the gathering place for Auburn students to cheer winning teams for many years. McAdory  Lipscomb, onwer of Toomer’s Drug Store for 25 years, said he did not know how the tradition got started, but feels the famous corner was chosen because ‘it was a convenient place for everyone to meet.’

When the 11 other Southeastern Conference schools were contacted, it was found that no other SEC school had anything quite like Toomer’s Corner.

It was also found (in retrospect) that no other SEC school had a student newspaper with a sports editor quite like Tennessee’s:

At the University of Tennessee, Paul P. Finebaum, sports editor of the campus paper, said he “didn’t think there was any one concentrated thing.”