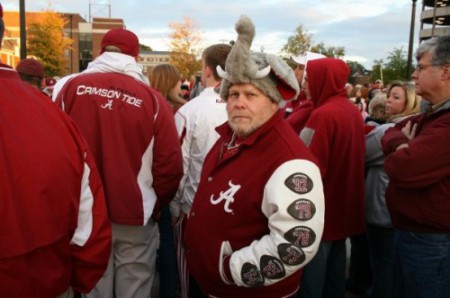 Let’s piece together the events of this afternoon, shall we?

1. Harvey Updyke, a man so shrewd he admitted to (virtually) the entire state on live radio he had committed the crime which now threatens to put him behind bars for years, pulls into this gas station. He claims that as he exits his car, he is immediately assaulted by an unknown assailant. However, the attendant at the station sees nothing occur and tells reporters she believes Updyke to have been behind the station when the assault occurs.

In either case, there are no other witnesses despite this occurring in direct view of the attendant. There is no surveillance video. Fortunately, because he is so shrewd, the accused criminal is a highly credible sole witness.

4. Despite having either been knocked completely unconscious or assaulted so badly he was unable to offer a single detail regarding his attacker or attackers, Updyke’s only injury (or only one worth reporting, anyway) per the Opelika police chief is “a scratch on the forehead.”

5. Despite having been knocked completely unconscious just minutes before — potentially by a wooden board, though why doctors would need to tell Updyke how he had been attacked when he told police he had been punched is curious — or simply assaulted by an attacker or attackers who must not have gotten too far either on foot or in the car Updyke managed not to see while he engaged in some activity this blogger is unable to discern, Updyke declines to call either an ambulance or police. He drives himself to the East Alabama Medical Center.

6. Despite having been knocked completely unconscious, potentially by a wooden board, Updyke is released by the EAMC within the neighborhood of 60-75 minutes.

By everyone’s account, this is an extremely small amount of time to wait in an emergency room with any kind of serious injury, such as the kind sustained when being knocked completely unconscious, potentially by a wooden board. Though to be fair, Updyke himself did not believe himself to have been either knocked unconscious or struck by a wooden board.

7. While there, Updyke meets with a television reporter. Within minutes, the lawyer is appearing on the Schmaul Schmineschmaum Schmow (er, Show) to explain about the attack. “I had nothing to do with my client being attacked at a gas station,” the lawyer says, for unclear reasons.

So, what conclusions can we draw about the events listed above?

If you believe many mainstream journalists like Pat Forde, there is only one: football fans in Alabama are barbarians, Auburn fans like the one that assaulted Updyke included. The events of the afternoon make it obvious.

To which I can only say, well, clearly.