Off-season kick-back relaxing is easy when your team of choice won a National Championship and signed a consensus top three recruiting class. These are the good times.

Since we’re all hunkering down for a six-month celebration, every week, from now till some unknown date in the future, I’m going to write what we’ll call a culture review. “Review” isn’t the right word exactly, as I’m not going to assign arbitrary stars or attempt fair-and-balanced criticism. In my mind, this is more of an artistic discourse. Criticism implies a certain pompous desire for destruction. Any old hack can destroy, reduce, mock, but it is much harder, and much more gratifying, to articulate why you love or find something interesting — what emotions it stirred, what ideas it solidified, what lies it stripped. I’m not going to write about something I hate. If I’m not enjoying a book, movie, television show, or whatever, I stop reading, watching, or listening. There’s too much worthy material readily available to slog through something just to scratch the completionist itch. Your parents lied, you don’t have to finish everything you start. 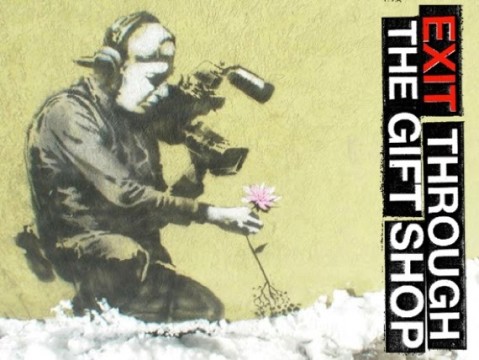 Street art, or graffiti if you’re not willing to concede its status as “art,” speaks to the instinctual anarchist in us all. Street art stimulates the portion of our psyche decidedly not civilized, our gut. For it to have this effect, for it to be more than spray paint squiggles and hubris, it must be subversive. To work, in my mind at least, street art must have a certain us-vs.-them quality. Banksy, more than any other street artist, knows this. 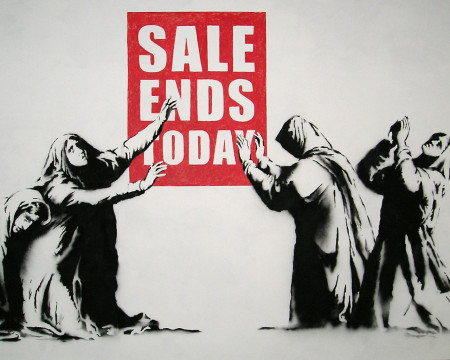 The core of Banksy’s subversiveness is his refusal to grasp fame. He doesn’t manage his Facebook page. He isn’t tweeting or seeking followers. Every interview he does is voice-modulated and shadowed. He’s allowed people to build myths. He’s left enough blanks and stayed small so people can ascribe and extrapolate all sorts of legends. He’s become both Robin Hood and The Joker. 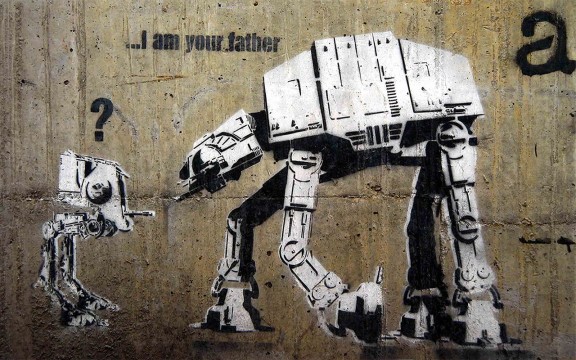 Banksy is from Bristol, U.K., and he was born in 1973 or 1974 or 1975. He’s upper class. He’s lower class. He loves you. He pities you. He drinks like a fish. He shoots heroin. He is a prophet. He’s a degenerate rabble-rouser. He is most definitely an “art terrorist” whose fame stems from outrageous public acts such as sneaking his own art into the British Museum, vandalizing portions of the West Bank wall, and dressing a blow-up doll to resemble a prisoner detained at Guantanamo Bay and leaving it inside Disneyland. He’s an Orwellian prankster, twisting, flipping, and flopping the language of Big Brother to subvert and reflect the absurdity of modern life. He is a social mirror. Regardless, message or no message, he’s a talented artist with a distinct style. 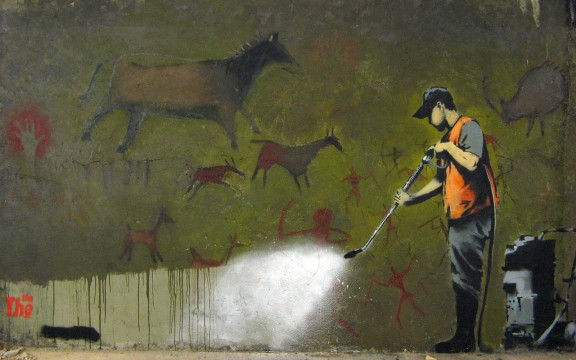 If you watch Banksy’s Exit Through the Gift Shop as a “straight” documentary, i.e. with reliable narrators, no consideration of manipulation, no concerns of staging or reality shaping, then it’s an enjoyable film about a French immigrant and vintage clothes store owner named Thierry Guetta living in Los Angeles who obsessively films every portion of his own life and who, when he stumbles upon his cousin Space Invader creating street art, gets involved in its insular underground. He gains the trust of several big-name artists, Shepard Fairey being one (he of “Yes We Cam” fame), and eventually meets the man himself — Banksy. Banksy and the other artists Guetta’s been filming think he is working on a documentary about street art. Not so much. Guetta isn’t a filmmaker at all, as his attempt, which was brought about by Banksy’s prodding, shows. Guetta’s final film is terrible and Banksy offers his services as a filmmaker and editor. 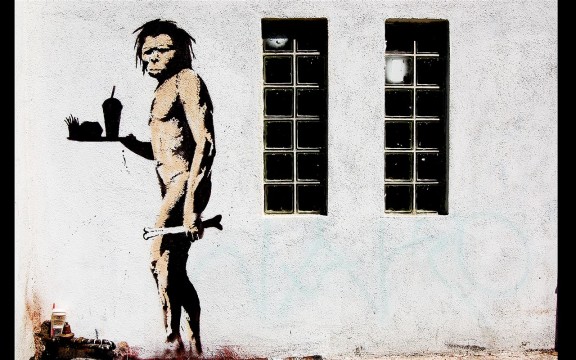 The narrative of the “straight” viewing follows Guetta’s journey from vintage clothing store to amateur street art filmmaker to, in the last third, derivative street artist, the aptly (ironically? hintingly?) named Mr. Brainwash. Guetta, as Mr. Brainwash, fashions himself a modern Andy Warhol. His first show, Life is Beautiful, is a jumble of Warholian pop culture references and heavy-handed cultural warnings, e.g. a monster made out of old televisions. Even though the show is wholly derivative and a bit bland, hype and flash help make Life is Beautiful a success. Mr. Brainwash sells upwards of $400,000 in art the first day alone. (Memory might be failing here.) Several colorfully-clothed patrons feel he is the “next big thing.” One even calls him the next Banksy. The “straight” viewing ends with a voice-modulated Banksy kinda gee-shucksing over Mr. Brainwash’s popularity.

“Maybe it means art is a bit of a joke,” a shadowed and voice-modulated Banksy says. “I always used to encourage everyone I met to make art. I used to think everyone should do it. . . . I don’t really do that so much anymore.” 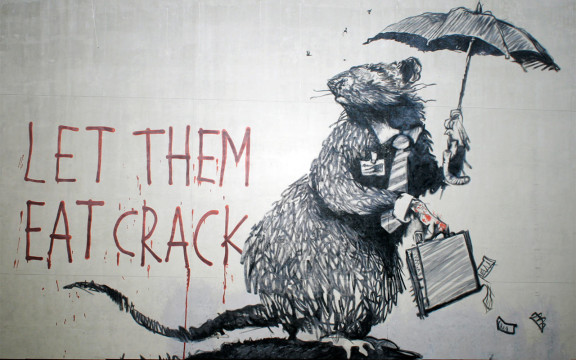 My viewing of Exit Through the Gift Shop was “straight.” I believed my eyes and ears. But I got to thinking about it and doing a little Internet research and now I’m not so sure. Some say Banksy is Mr. Brainwash, and he was the whole time. I could see that. Thierry’s backstory is never explored, he seems to have infinite free-time and resources to pursue street art, and Mr. Brainwash’s art looks similar, very, very similar, to Banksy’s. (And I think Banksy would find perverse amounts of joy starring in his own Oscar-nominated movie unmasked as a dopey Frenchmen turned faux-artist.) Some say it’s all an elaborate hoax orchestrated by Shepard Fairey and Banksy. Some say it’s Banksy being Banksy and having a good laugh at the art critics and collectors and the imaginary market they create and manage. I’m not sure. Maybe it’s less than the theories, maybe it’s what it purports to be. 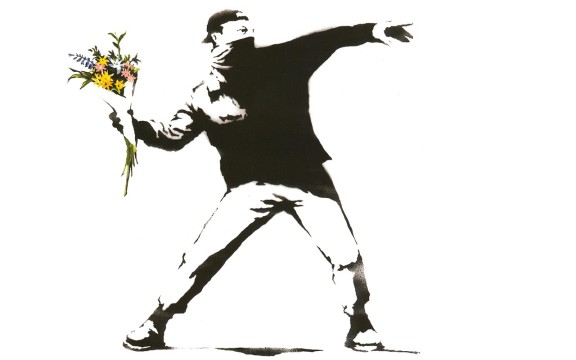 View it how you will. But watch with care.

Ben Bartley is a graduate of Auburn University. He would one day like to get paid for this whole writing business. (Feel free to offer him money.) In the meantime, he’s TWER’s assistant editor / water boy. Write to him at [email protected]. Did you read his essay on coming to unspeakably marvelous terms with the personal impact of Auburn football? You should.

* The Secret History of Pat Dye Field
* Nick Saban takes Comedy Central sword to the face
* Erin Andrews at Toomer’s Corner
* In the time of “Got 13″ she was a Tiger
* Was Walt Disney an Auburn fan?
* Auburn football radio broadcast in punxploitation classic
* Did an Auburn fan contribute to the teenage delinquency of Courtney Love?
* Auburn students stand in for Joaquin Phoenix, stars of Space Camp (1985)
* The G.I. Joe from Auburn