We talked to Krista Klumpp for a long time Wednesday afternoon. We got the feeling that the publicist babysitting the conversation — a Washington State grad named Katie who hasn’t forgotten the 2006 loss to Auburn but apparently gotten over it — would have let us talk to her as long as we wanted.

Would CBS have been as accommodating to an Auburn website trying to interview a “Survivor” contestant with an Auburn connection in oh, say, 2008, a less-than-stellar year on the gridiron for the Tigers, and Krista’s last on the Plains? We’ll never know. But whether the fact that the former head cheerleader for the current kings of college football was cast for the season serendipitously simultaneous with Auburn’s national championship played into or not, they were willing to let us ask her as many questions about the 2007 Florida game and about Cam Newton and about whether she liked the photos we sent her of Shug and her mom, a head cheerleader at Auburn in the late 70s, as we did about her experience on what she doesn’t call a reality show but the “hardest and best-thought-of game show ever.” Not that the 25-year-old south Alabama native and current Columbia, South Carolina-based pharmaceutical rep could talk about her bikini-baring escapades on the beaches of Nicaragua this past Fall in anything more than the vaguest of promotional pleasantries. But we tried our best to stick to the script. And we’re definitely going to watch her War Eagle her way with the juries of jungle law (she’s already receiving at least physical comparisons to “Survivor: Samoa” winner Natalie White), and post weekly reports on her progress — something about the tone of her response when we asked if she would do it over again made us think she’d have good reason to, maybe a million of them.

So how in the world did you end up on “Survivor”?

That’s what everyone always says. It was kind of spur of the moment, an out of the blue shot. I was in St. Petersburg, Florida doing an internship for Auburn and I had a couple of days off. There was this really cool venue—restaurant—bar area and they were holding an open casting call for the show, and I was like,  what the heck I’ll go get some freebies, hang out and meet some interesting people, and give myself a shot. I gave about a 30 second talk on why I could make it through the show and be an Ultimate Survivor and just eventually made my way through the process.

Well, it’s funny, because it’s all about you, and at these type of castings, they want to know who you are and why you want to be on something like this and you’ve got to be yourself, or it’s going to be very difficult when you get to certain elements [of the show] to be anything other than that. I thought from the beginning, ‘oh gosh, I’m really going to go through with this if they really want me on the show.’ I was going to give 100 percent going through the process. I really felt like I had what they wanted.

Would you do it again?

Oh, absolutely. Oh yeah. A lot of my friends and family asked me that, and going through you experience so many things, you put yourself through so much. It’s kind of one of those things where there’s no way I couldn’t do it again. I couldn’t not do it.

In one of the promos you said you were looking forward to not having to wash your hair while you were there.

Well, there’s the possibility of staying over 39 days, and there are no luxuries or soaps or bathing and all those things. But what I really mean was that I was excited about not having to go through the pricess of getting ready and getting fixed up all the time. I couldn’t believe they put that in there. 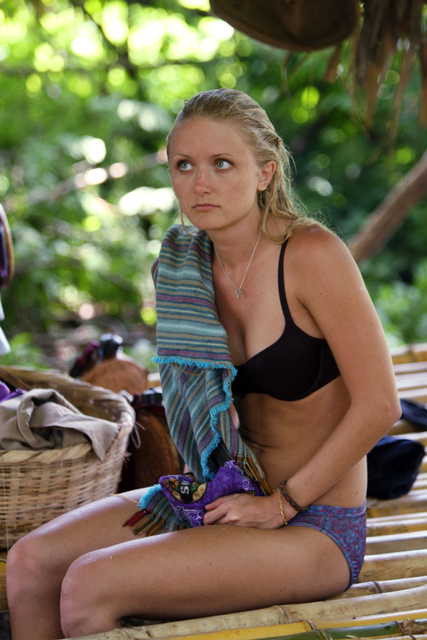 Are you going to have viewing party for each episode?

Well, for the premiere next Wednesday, I’m having a private little premiere party with one of my best friends from Miami who is flying in and two or three of my other friends from Columbia.

Where did you watch The Game?

I’m so ashamed, but I didn’t go. I watched it with my neighbors here in Columbia. They’re Gamecocks. They watched me bite all my nails off and pull out my hair and go absolutely nuts. And then I rolled a decorative tree in my apartment.

So what was the thing you missed having the most while you were there? [Ed note: She wasn’t allowed to tell us that; we rephrased the question to what she thought she would miss the most.]

The thing that most worried me about going into the show was the food aspect, not having food at my disposal and having to go a long time without eating. I’m OK with eating whatever there is around. I’m not a picky eater, but being from the South, I love always having the best food ever. I was really worried about the food part of it. And of course I was really worried about what I was going to be missing with my family back home, knowing I was going to be away that long with no contact whatsoever, and not being able to be there to take care of things if a big event happened.

Did you talk about Auburn while you were there?

In the interviews I talked all about Auburn, just because it’s a big part of my life and how I am, in terms of being on Auburn’s cheerleading squad, being head cheerleader at Auburn, being a leader of ten girls and ten guys at a college level. I gave a few “War Eagles”. [Watch her do “stand up and holler” for “Survivor” here.]

Did you think that your cheerleading experience, and especially your leadership experience as as a head cheerleader, would be your her advantage down there?

Yeah, absolutely. I thought going into the game I was going to take that and use it. Of course, my thought process was that I didn’t want to be too forceful. I’m not intimidating. I don’t think that being a smaller blond girl many people are going to be intimidated by me. But I knew going into the beginning that I had to show that I was useful to be a force on the tribe, for the tribe to want me to stick around. I did want to take my leadership and strong personality traits and hopefully show that as being needed.

Was it hard — and is it hard— having to keep all of this stuff a secret?

It’s super-hard, not being able to tell people ever where you were going. You had a few close family that new knew. Your mother, father, those people. My sister and brother knew where I was, but other than that I had to come up with a great lie. There were all kinds of lies going around. It’s really hard because you want to tell so many people because it’s such an awesome, cool experience and because I want people to be interested in watching the show and excited to see what comes next.

Did you have a boyfriend you left behind?

Yeah, I did. He played baseball at Auburn in 2000 and he’s still playing pro ball. We live pretty much in different cities year round so being gone that long we didn’t thing was going to be too difficult.

When was the last time you were in Auburn?

I was in Auburn last for the Georgia game.

So have you processed this season? When did you know we were going to win it all?

Starting out at the beginning of the season, those first few wins were scary and so close, so I’m sure no one was really thinking we might win the national championship this year. Then we started winning a few more and it started being brought up more and it was like ‘if we can just get past this one, we might have a chance.’ It was almost like it was just game by game and then when we passed the Alabama game, or up to the Alabama game, and we coming back and winning. After that, I knew we were going all the way. I knew there was no way we could lose, absolutely not. It’s hit me. I ordered some National Championship shirts. It’s been awesome.

What do you think about Cam?

I love raw talent. He was just amazing to watch. Only 2 percent of the world has the ability Cam has and we had him, we had him at Auburn. To have him wearing and representing Auburn, to be all ours… it was just awesome to be able to watch and be able to be a part of the reward for everything he deserved. I felt he was mine. He couldn’t really be my kid, I guess, but it felt like ‘that’s my best friend out there!’

Hmm… such a hard question. I always go between spelling out AUBURN and Bodda Getta.

What was the most memorable game for you as a cheerleader? 2006 Florida?

Oh my gosh, right? That was one. But even thought it wasn’t at Auburn, the Florida game at Florida in the Swamp, when Auburn wasn’t expected to win at all, and just being on the field and already starting to celebrate, and realizing that we had to kick it again. That was one my favorite games. Then of course my last game in Jordan-Hare, the Alabama game. There were all kinds of emotions around that, it being my last game to cheer there. It’s between those two.

So has it sunk in that you’re now about to be thought of as a reality star? That you’re about to be a part of pop culture beyond being an “Auburn cheerleader” search result with that one SportsIllustrated.com “Cheerleader of the Week” thing? Are you looking to parlay your new celebrity into an entertainment career?

It’s a reality show, but it’s so much more a game. It’s a real game. I just can’t express to you how real it is. I went into it just strictly to be the Ultimate Survivor with no other thoughts on what this could to or what it could do for me later but to go to win the game. But of course media is amazing with what it can do for exposure and leading to other opportunities for people. I’d be an idiot to not be open to other ideas, to what it could do. 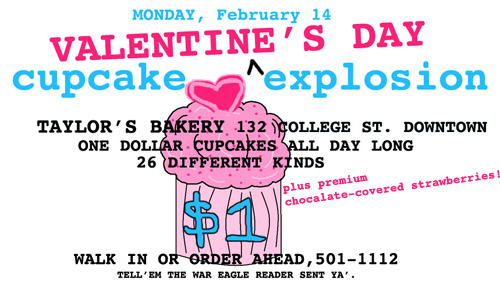 To find out how to advertise on The War Eagle Reader, click here.

* Bear Bryant’s lost year at Auburn
* Classic punxploitation flick features broadcast of Auburn game
* Auburn students stand in for Joaquin Phoenix, stars of Space Camp (1985)
* The G.I. Joe from Auburn
* Videographer behind AU hype videos wasn’t initially sold on “All I Do is Win”
* Two campy degrees of separation between Auburn and Swamp Thing
* I Survived the Kopper Kettle Explosion and all I got was this t-shirt
* “Alabama Polytechnic is the best…” for Eugene Sledge in HBO’s The Pacific
* The Ron Swanson Pyramid of Auburn
* The Auburn plaque in 1984′s Tank
* War Drobe Eagle: The Auburn shirt in Cannonball Run