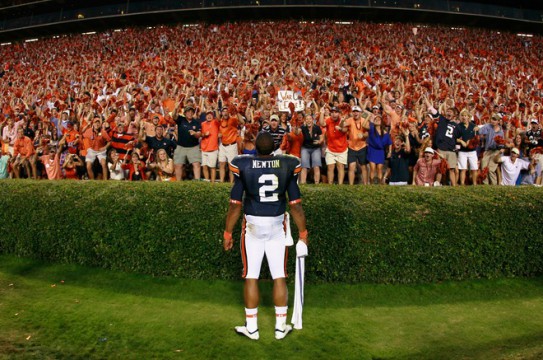 It is a relative certainty that one thinks of their time in a special place as the golden, gilded age. Birds never fly higher or sing any sweeter. The ladies were never more attractive and the young men never more friendly and willing to lend a hand. We’ll forget the things that caused us grief, because the mind is kind when it comes to pleasant memories. Instead we think of that perfect time, in that lovely place that strikes our hearts so tenderly.

It was my sophomore year at Auburn, when writing to a friend out west, that I realized how breathtakingly beautiful the sunsets are here. A flat place, with no big city to the west to add the character of smog to the evening’s show, and yet the views were still startling.

For those of us fortunate enough to have such a pleasant experience at Auburn, the college years generally fit that bill. We think of our time on the plain as the perfect time to have been a college student. Those were the best Hey Days, the perfect cake races and maybe Chewacla just felt a bit nicer back then.

It was in the next year or so that the tenants in the downtown blocks started changing, and the feel of the town with it. The Tiger Theater was razed. A Gap went in that place. This was a before and after.

Of course college towns are often changing. And with the graying temples come blurring memories, but when we think of it collectively the fonts sharpen. The tastes from the Flush return, the sound of the Sunday explosion of the Kopper Kettle comes back to life. Spaghetti at the Auburn Grill is once again fragrant in that collective consciousness.

I used to marvel – and cluck – at the people who were frequent contributors to Sports Call, who would recall with fervor and detail some rainy, miserable night in Knoxville a generation prior or, older still, pedaling a bike to Columbus to see the Tigers play. How could this be relevant, or even worth remembering?

We define our charming little town and the notable old university far too much through something as silly as a football game. It is the catalyst for many happy memories as Bartley reminds us, and through it come many generous benefactors and a lot of publicity, no doubt. But in a Zac Etheridgian way we’re all aware of its relative place of human importance. Even so…

I had a professor who considered Jordan-Hare Stadium “A monument to lost causes.” I disliked it then, as now, but for different reasons. Years later and a professor myself I understand better his perspective. I know, too, the opportunity that the stadium and the program present to young men willing to make the most of it, even if it is only to trade on their name, so famous for a short time in white letters across their backs. I think of the young men who come from the deepest poverty the state can offer, who are fortunate enough to use their strength and their speed and their ability to shut out pain and parlay that into the potential for something positive – and I don’t speak of Sundays under the big lights, but the also difficult leap of improving one’s quality of life. Lost causes, indeed.

A lot of money comes through those old walls of cement and glory on Saturdays. The university, in its superlative way, has figured out how to monetize just about everything. You can have your picture taken with the golden eagle, for a small fee of course.

When I was in school I had a friend in the service fraternity that took care of Tiger. They flew her on that green space just outside her aviary, in the shadows of Jordan-Hare, between Haley and Parker. You could find them out there on sunny afternoons as people walked casually by on the concourse. This was no big deal.

When my grandmother came to visit I conspired to walk her by as the eagle was flying. She got to pose for a picture. You paid for this treat on gameday. It was free during the week. “This sort of thing just doesn’t happen to everybody,” she said. “This is a once in a lifetime opportunity.” She got to do it again the next spring, too.

We took her onto the field. Then Jordan-Hare was just … open … and you could walk in during the day. She played pretend football with us. We had a goalline stand in the north end zone. Her best friend of 50 years was the referee, who marked the play dead. I love these pictures. These were the glory days, as we’ve all no doubt thought of our own experiences.

It comes to pass that those of youth and vigor turn to adulthood and confidence. And, God willing, we might one day stoop and shuffle and remember when we could take on the world. Some left for far flung places to do it. Others returned to their ancestral communities to lead the way. Others stayed in Auburn or returned, recalling that special time, that special place. They have found it changed – the Grille is gone, there’s more development on College Street than seems necessary, the Bottle is a figment, places like Lil Ireland’s and Ultravox have been swallowed up, there are buildings on campus you may not recognize and yet the place remains much the same – but their friends find themselves jealous of that opportunity to go back.

In some of the old Glomeratas there are luxurious shots of downtown. In the 1950s the town didn’t look that much different than what we would recognize from the 70s, 80s or 90s. A friend of mine — a grad that is also a townie, a boy of the 80s and a student of the 90s — remembers the Piggly Wiggly sign I’ve shown him in the old tomes. Much of that which has changed has seemed to do so relatively recently.

The enduring part of Auburn is not what it is, or what it was, but that which it aspires to be. The face, the complexities and the inanities vary as her people come and grow and go. Perspectives change. Dreams shift. Ideals are more long-lasting.

I believe in Auburn, and love it.

It is a great sadness that Jim Fyffe could not see this and that Dean Foy could not lead one more Wah Eghul from the field. But it would not be surprising, in some idealized hereafter, to imagine Shug sitting alongside them with his Coke and peanuts, watching the boys play.

I think of them, and all of those collective memories, in that beautiful autumn sunlight, where the golden rays dip into the stadium and stretch long the shadows of mortal men. This is the casting forward of our memories. These are the triumphs we’ll tell children about, as they’ve been told to us. That sunlight seems to dance eternal.

Though it may flicker, we’ll long remember that glorious day Newton – every inch the 7-feet-2 of toned, hard-as-a-brick 357 pounds of pure muscle and lightning given to him from Bo’s magic scepter from Mount Heisman – carried the puny LSU defender across the goal line. That story will mutate, just like the temperature on that bitter Thanksgiving weekend when the Tigers braved the elements, the people and the circumstance to best the Tide, though little embellishment will be necessary. Some things stay the same and to say “They did this” will surely carry a weight through the ages. We shall remember the impossibility of thumping Steve Spurrier good and hard, as we’ve always wanted too. We shall remember, too, the big, final stage, for we know it is football that people will see, but Auburn that we’ll get to tell them about.

As this moves from the irrepressible, improbable present to the poignant past, we’ll remember too, this season of great joy and hope. The town and the campus changes, the people the change, our neighbors in the stadium and the names on the jerseys flare to prominence, becoming another person, another bright bit of Auburn’s potential. There will be memories of our losses, but also of our gains. There’s the roar that greets the alumni who thrill us with flyovers, the renaissance of old characters back to say hello and that stirring video from Afghanistan, where Auburn men and women said with no irony “I believe in my Country, because it is a land of freedom and because it is my own home.”

And then we’ll know.

“I think Auburn, the whole town of Auburn University and everything Auburn represents is past due for something great like this. We’re not just playing for ourselves, we’re playing for so many people who don’t have an opportunity to play, but take pride in Auburn and wear it every single day.” – Cam, in the dessert.