The Tigers didn’t win the national championship. Neither did the Ducks.

The Metro Washington Auburn Alumni Club played it’s University of Oregon counterparts to a 14-14 draw late Sunday morning in the shadow of the Washington Monument on the National Mall in a game sanctioned by the Capital Alumni Network’s flag football league.

Oregon won the toss, elected to defer to the 2nd half, and led Auburn for most of the game.

“We scored a touchdown and a two-point conversion on the second to last play to tie it,” said Jeff Cline, a 2000 Auburn graduate who serves as the Auburn club’s league liaison and who currently works at the Pentagon. “It wasn’t much, but it was enough.”

Approximately 30 members of the Auburn club participated; the Oregon group had half that, said Cline.

“Some of the Auburn guys actually made a trophy and we had a guy there who dressed up as the Heisman Trophy with spray paint and everything. It was a big deal.” 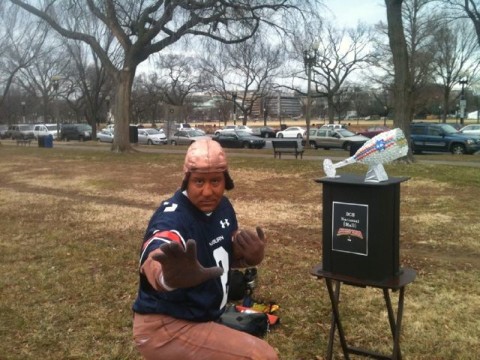 But sadly, not all fun and games: David Bules (’04), who traveled from Cincinnati to play in the game, suffered what is thought to have been a stinger while defending a receiver on the game’s last play – a desperation Oregon flea-flicker – and was taken by ambulance to George Washington Hospital.

“It was such a blast, at least till the end when the guy got hurt,” said Caroline Wren, a recent Auburn graduate currently working for GOPAC, a Republican political training organization. “I think he just snapped his neck wrong.”

Bules gave a thumbs up as he left the field, but due to the circumstances the two teams decided to forgo overtime.

“Early reports are that an MRI showed disc compressions,” said David Binet (’99), Auburn’s quarterback for most of the game. “But there are more tests they need to conduct. Bules looks like he’s going to be alright, which is wonderful news.”

Even without the reality check of injury, Wren, 23, said the game was more intense than she expected.

“They had a championship cup there made for who won and tents for people watching on the sidelines and there were official refs,” she said.

Neutral officials were solicited (with bribes of beer) from area Clemson University, University of Delaware, and University of Illinois alumni clubs. They were apparently flag-happy: Auburn had a touchdown called back for offensive pass interference and was even flagged for excessive celebration.

“There was a coin flip, there were real rules,” Wren said. “It was no joke.” 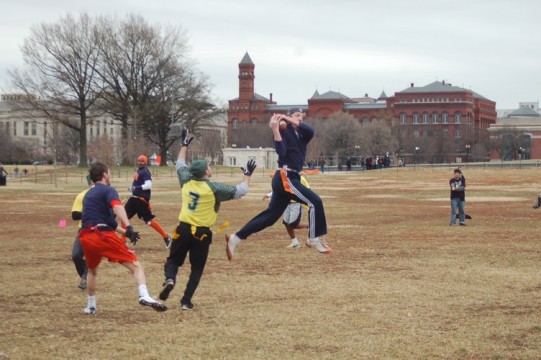 Though they took it seriously, Cline, who caught Auburn’s game-tying touchdown, said the team didn’t worry about a loss jinxing Auburn on January 10.

“We thought of it like this: no matter what we’ve done, win or lose throughout the season, Auburn has always won.”

The DC Tigers ended the season with a 3-7 record, but won 3 of their last 4 games, including a 31-8 blowout of the University of Alabama’s DC alumni chapter. 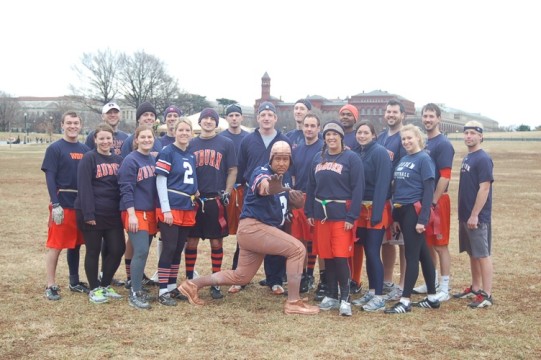