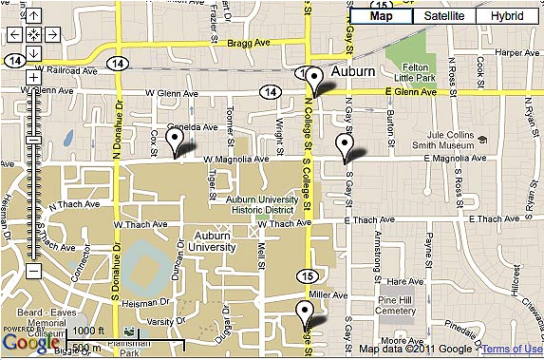 How far did the rolling extend? TWER contributor and all around good guy Kenny Smith took to the streets last night to survey and actually plot the toilet paper on a map.

On North College Street, it was flung as far as First Baptist Church. On S. College, it stretched to Funchess Hall. East Magnolia was rolled only to Hamilton’s restaurant, but West Magnolia saw action all the way down to Subway. Which means that, essentially, the entire front side of the Auburn campus was rolled.

However, it’s sticking around due to more than just sheer volume.

Patricia Lamar, the district manager for Rite Way, the Montgomery-based commercial janitorial service Auburn University has contracted with for more than a decade to de-toilet paper Toomer’s Corner, said that she was called by university officials yesterday and told to hold off on the cleaning.

“They called and told us not to come yesterday, ’cause we came Tuesday and there were people there the whole time, still rolling it and taking pictures,” Lamar said.

Two crews of six workers will continue removing the toilet paper all day Thursday and possibly into Friday.

“It’s going to take a lot of time,” Lamar said. “There’s a lot of toilet paper out there.”