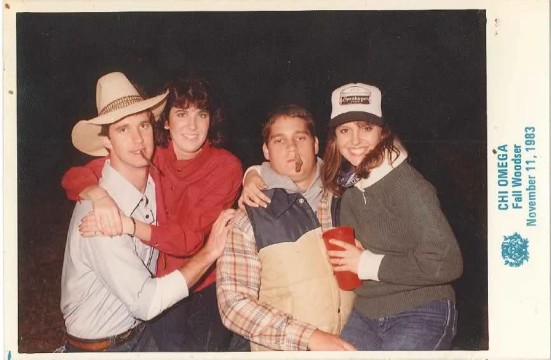 The cowboy’s hand on young Coach’s shoulder, the mouth “items” (one theory suggests Chizik’s is merely a photo blemish, but we’re not convinced), the dubious headgear (though that Copenhagen hat would fetch fat hipster coin on eBay), and the baller’s look of defiant disinterest…

Maybe it was a Chi Omega theme night: “Snapshots of Regret”.

But whatever it was — and as Patrickthetiger said, “It was the ’83 Fall Woodser… anything goes” — it has upped our respect for the Chiz in ways we never thought possible… more than the gold chain, more than the leather jacket. You can take the man out of Florida, but you can’t take the Florida out of the man. And we dig it.